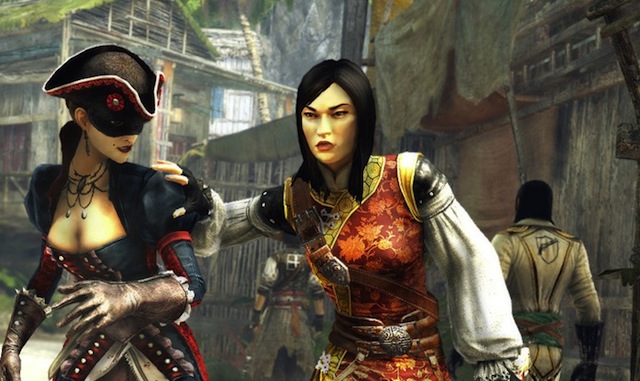 Blackbeard’s Wrath (absolutely nothing to do with Montezuma’s revenge) is the multiplayer content for Assassin’s Creed 4 that’s out today, Dec. 10th. Among its cast of three heroic scalawags is The Orchid. Though her back story goes into Templars and the Qing dynasty and some stuff about how she balances her mind and body through the blade of her katana, what’s important here is that she is a female, and you can play as her.

While this is a step in the right direction for female representations in games, I wonder when Ubisoft will have the gumption to make a female the main character. As it stands in the Assassin’s Creed franchise, the women warriors are regulated to the spin-off. It’s true that Aveline de Grandpré was the starlet of Assassin’s Creed: Liberation, but her story was secondary to Connor Kenway’s. Here, it’s the same thing: playing as a woman is optional, and Blackbeard is the focal point.

Ubisoft may be gunshy about putting a female in the leading role of their bread-and-butter franchise after doing so with Beyond Good and Evil, which flopped despite being excellent. But that was a decade ago and times have changed. As we saw with the makeover of Lara Croft in the latest Tomb Raider, games are capable of getting women right and selling big. Isn’t it time we saw a female lead in a mainline Assassin’s Creed game?