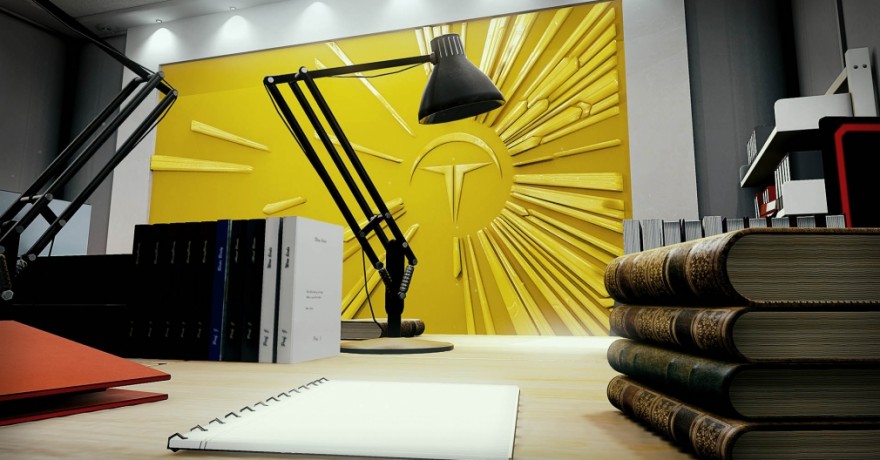 The Assembly is an apt name for nDream’s virtual reality adventure game. Patrick O’Luanaigh, CEO of nDreams, and George Kelion, Communication Manager, showed me what will be one of the first launch titles for not only Oculus Rift but also HTC’s Vive and Sony’s Project Morpheus. These are three different headsets, each with their own motion hand-controllers, which may or may not come in the box. Oculus and Microsoft announced last Thursday that an Xbox One controller will come with every Rift when it launches next year. I held one in my hand as Kelion laid the Rift atop my head. There are a lot of pieces involved with early VR development—most of them are moving, and not all of them fit.

“This controller was developed for flat surfaces,” Kelion reminds me, referring to Xbox users playing on a television. But now that this traditional controller will be the first method of engaging with virtual reality games, teams have to reconcile its intended use for this new paradigm: three-dimensional space within which the player is present. But my favorite part of The Assembly was when my hands never moved and I simply looked up at the sky and saw the moon. Even better? Looking down and seeing my feet.

The opening scene has you strapped into a gurney. You’re being wheeled into a large complex for mysterious reasons. Kelion explains how The Assembly, as a hopeful launch game for the three major VR platforms, needs to be very careful as to how it introduces players into this new kind of environment. Early on you can only move your head; in the game’s fiction, this is because your arms and legs are held tight by straps. This is the kind of design conceit that early VR developers will have to supply over and again, in subtly tweaked ways, so that their customers’ first experiences are not a massive rush of nausea or overwhelming confusion.

As I enter the complex we go into an elevator. Kelion says to look down. I do and see the shaft below. If I look ahead, we descend past windows with people in lab coats working on… something. It’s a kind of guided ride, with fully independent vision in a 3D space, that operates as less of a tutorial and more of an acclimation center for the player’s inner ear.

We’ve skipped ahead to Chapter 3 and now I’m walking into a large experiment room where eight mannequins sit at a dinner table. If I tilt my head up I see a shadowy figure watching me. This is some kind of test. A scientist has been killed and I need to figure out, using clues connected to each mannequin, who the killers are.

“We feel like we’re standing on the shoulders of everyone who came before us.”

With the buzz of E3 beyond our meeting room breaking through the headphones, it’s difficult to hear the audio clues and Kelion’s guided instruction. But what’s quite clear is the feeling of being in a space along with other objects. I lean up to a mannequin and see the smooth texture on the plastic face. A bowl of fruit sits on the table and individual bananas and watermelon slices jut out from the lip. The closer I bring my face to the fruit, the more detailed they get.

There are themed spaces behind each mannequin, each with objects to look at and audio recordings to listen to. The idea is a kind of puzzle diorama, where you roam through this space, looking for hints that may out the guilty party. With more time and a quieter room, I could tell you whether or not The Assembly might be a good blueprint for the kind of VR experience that leverages this new display while not overloading our unevolved senses. As is, Kelion had to basically tell me where to go and what to do: pull the knife out of the dead mannequin, go to the office room, read a note about purchased wetland property that went bad, push the knife into the businessman mannequin’s back. The carpet below me had a lush texture, very different from that of the cold hard floor. Sadly, once removed from the gurney, I no longer could see my feet. Just as well; with the combination of moving my vision with the Rift and walking forward with the Xbox One left-stick, I felt a bit like I was walking on a conveyor belt moving two separate ways.

As he directed me toward the blue door, I looked up again and saw in the distance above me, through hanging warehouse light fixtures, the shadowy figure again and wondered if he, too, was a mannequin. When the door opened and the demo was over, I felt all too human, feeling the effects of unfinished VR hardware on my digestive system.

I ask if he can see a time when VR is less about solving the technology and more about focusing on the experience or the art.

“Oh definitely,” Kelion says. “We’re twelve to eighteen months out. The great thing about being in the U.K. is that sense of collaboration and community.” One team will solve a problem hindering another studio’s games they’ve heard about and share the solution. Kelion compares this early time to when 3D games were first possible back during the transition out of 16-bit into the PlayStation and N64 era.

“We’re a lot smarter than we were in the ‘90s,” he believes. But more than that, they’ve gone through these phases before, and everything is accelerated through iteration and previous trial-and-error. “We feel like we’re standing on the shoulders of everyone who came before us.”