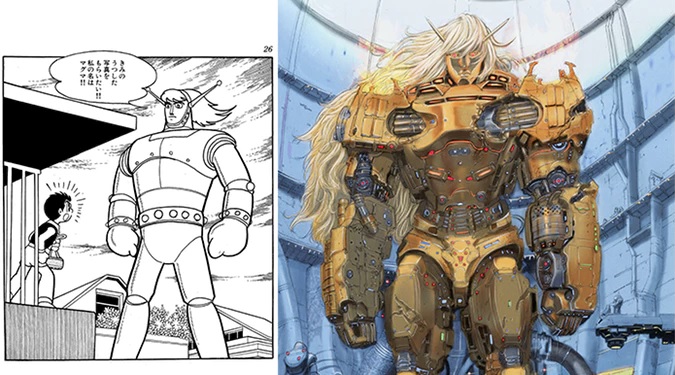 Of all the collaborations that the disco and electronic composer Giorgio Moroder has participated in (collaborations that include the likes of Janet Jackson and David Bowie), a joint project with Osaka-based game studio Project Atom to make an Astro Boy digital collectible card game might be the most surprising. But, here we are, and he’s hardly the only big name tied to the project.

In Astro Boy: Edge of Time, currently expected to release early next year, dark forces have destroyed much of the known universe, with who little survived living in eight districts in a floating city called “The Sprawl,” which “exists outside the normal flow of time and space.” Peace exists among the people of The Sprawl until being invaded by the demon king Goa, interrupting the quiet.

Combating this new force and his fleet are classic characters Astro, Magma, and others, assisted by new heroes called “summoners,” able to use cards to “manifest hard light construct versions of those they’ve met, the summoners are able to create entire armies with the flick of their wrists.” Despite repelling Goa’s forces, many heroes were left hurt, including Magma who sleeps in the center of the city, and Astro, who is nowhere to be found. Two years have passed, and no questions have been answered, but now something new has woken up in the Sprawl. “A new era begins in the last city in existence.”

A Kickstarter for Astro Boy: Edge of Time launched recently with some pretty big names tied to it. Asking for $50,000 (USD), the aforementioned Moroder is acting as “guest composer,” writing the game’s theme song. Akira Yamaoka, of Silent Hill fame, is the game’s “sounds creator,” writing the rest of its soundtrack.

a love letter to the mind of its creator

The music—there are two preview tracks on Edge of Time’s Kickstarter page—is a mix of 80s-style new wave and a healthy dose of trance music, sounding kind of like the soundtrack to Mega Man 3 (1990) remastered for 2016. However, it is the game’s art that is most striking and notable.

Despite the name, Edge of Time isn’t a reboot of the Astro Boy manga series (1952); it’s a love letter to the mind of its creator, Osamu Tezuka, and his wide breadth of work and characters. Working in conjunction with Tezuka’s son, Makoto Tezuka, Project Atom is attempting to reintroduce the themes and worlds and Tezuka’s work, but by employing a whole host of famous artists to re-design “every character we can possible get our hands on,” scenario writer Nayan Ramachandran explains in the game’s campaign video.

Some of the seven announced artists are Nekoshowgun, the illustrator behind the design of characters in Lollipop Chainsaw (2012), Hiroya Oku, the manga artist responsible for the Gantz manga series (2000), and Suda 51, CEO of Grasshopper Manufacture, the studio behind Killer 7 (2005) and the upcoming Let It Die.

Of the art shown, new character designs are the most impressive, looking like a composite of Tezuka’s work and the work of Masamune Shirow, the artist and writer of the Appleseed and Ghost in the Shell series (1985 and 1989, respectively). Designs are detailed, colorful, and eclectic, combining futuristic, cyberpunk stylings with more historical, traditional Japanese designs.

Project Atom is seeking $50,000 with its Kickstarter campaign, which ends on September 21. To keep up with the game, you can follow its progress on Twitter. You can also check out this demo.