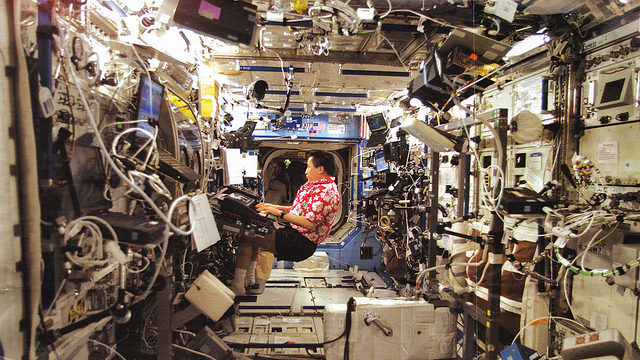 The human capacity to be playful never ceases to amaze. Even while hurtling through space at around 17,500 MPH (a statistic memorized during a childhood of astronautic ambitions) in a metal tube, with almost no leisure time, astronauts still make the time to make up – and play – games.

Mostly, they play with their food.

A recent Quora post by a NASA instructor/engineer proves that most astronauts could probably get a job at Valve, should they every have earthbound game design ambitions.

“They don’t get a lot of free time and when they do, they don’t always get it at the same time, so fun stuff like games tends to occur during meals. Often [it] is things like being able to catch a stream of M&Ms without use of hands or making an apple “orbit” around an orange.  That’s harder than it sounds when you are also floating. Those kinds of games are where they get to use their knowledge of physics by incorporating things like torques, inertia, precession, etc.”

It’s also unsurprising, given that most astronauts are trained pilots, engineers, or scientists.

The coolest game described by far is a sort of obstacle course:

“The one that impressed me the most was more of a challenge than a game. The objective is to see how far an astronaut or cosmonaut can travel through the vehicle without touching any sides.  One of the cosmonauts was incredible at that. He really looked like Superman.  He could go the full length and even maneuver around some obstacles and corners. That’s over 40 meters.”

No, it’s not Ender’s Game-complex, but it’s telling that microgravity games are so ubiquitous. Even Apollo 13 had a scene with the fellas playing around with globs of juice.

There is something inherently gleeful about the prospect of floating around unhinged (aside from the space sickness, of course) that naturally leads to playfulness, which in turn leads to the adoption of simple rule sets to structure play. We’re all game designers, really – astronauts just have the chance to do it with a fresh perspective.