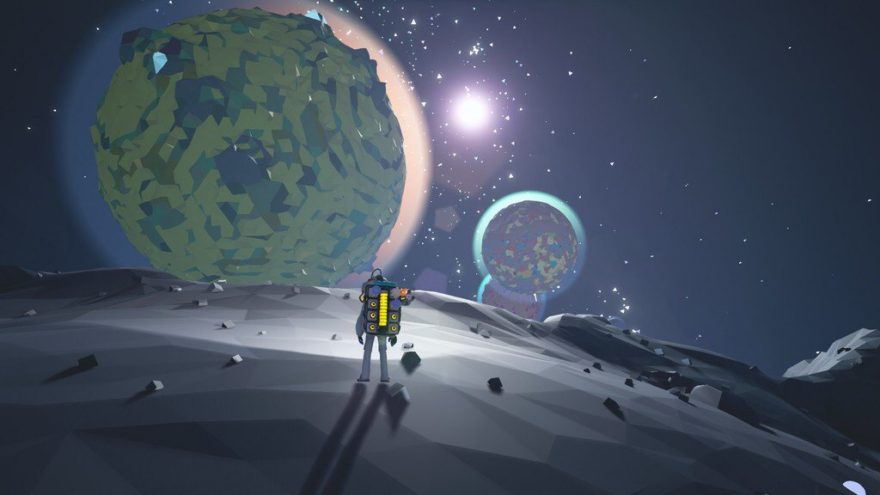 In last year’s man vs. nature (in space) thriller The Martian, Matt Damon’s stranded botanist looks into the camera and tells us exactly how grave his situation is. “If the oxygenator breaks down, I’ll suffocate. If the water reclaimer breaks down, I’ll die of thirst. If the Hab breaches, I’ll just kind of implode. If none of those things happen, I’ll eventually run out of food and starve to death…”

Aside from establishing those desperate stakes, that quote makes it very clear that, for the humans that step foot on another surface far from Earth, the most pressing danger isn’t going to be malevolent extraterrestrials or rampaging AIs. It’s going to be the planet itself, that brutal combination of inhospitable landscape and incompatible atmosphere. System Era’s upcoming Astroneer seems to take that quote to heart. Forget about combat or aliens to kill. Here, the environment is your enemy.


Creator Jacob Liechty explored this focus on environmental danger rather aggressively in a reply on Reddit. “Not having monsters to shoot does pose a problem for us, but by no means one that’s unsolvable. The basic ‘monster loop’ is something like: Encounter threat, Expend time and resources to resolve threat, Learn from experience and repeat. There’s no reason you can’t have this without monsters, and environmental dangers have the advantage that they’re true to life. The only disadvantage from a design perspective is that environments don’t chase you (at least not on purpose).”

you overcome the blinding dust and wind

In Astroneer, that monster loop is replaced by a need to adapt to and survive a hostile landscape, where dust storms, starvation, and unstable terrain are as fatal to you as any alien beast would be. Jacob continues, “But we are hard pressed to think that, when we read about actual space missions and when we watch reality-grounded sci-fi in which there are no aliens, that there still isn’t a really fun game there. The threat loop isn’t going to be as explicit as a bullseye, but like you say there are far more interesting problems the player will run into (repair, resource management, planning) which are equally life-and-death.”

But to the smart explorer following those tenets of planning and management, the deadly environment can help and hinder in equal measures. The unstable terrain that threatens to cave in while you dig through subterranean caverns can also be used to form barriers and shelters against approaching storms. Those fierce gales that can scatter your valuable bases and vehicles are also a potential sources of energy through wind turbines.

Conquering the game’s many planets through science and engineering is perhaps Astroneer‘s most central idea. Through tethers and guidelines, you overcome the blinding dust and wind. Through rovers and jeeps, you conquer the sheer size of the game’s sprawling planets. And through automated railways and drilling mines, you make that hostile landscape work for you, gathering the materials and minerals needed to build spacecraft to travel across the solar system and discover its secrets.

Astroneer is coming to Steam Early Access and Xbox Game Preview in December. You can learn more about the game and find additional screenshots on System Era’s blog, Twitter, and Facebook page.