If there isn’t a big tournament going on that weekend and you want to watch some Dota 2, you’ll have to settle for Artour “Arteezy” Babaev. Although Babaev is one of the most gifted professional players the game has ever seen, watching him play the game is not the kosher, measured deconstruction of the game’s drafting techniques, infinite spell interactions, and split-second plays you might expect. In fact, it’s a completely unbuttoned experience; he talks very little about why he performs any particular move, preferring to commentate on how poorly the people around him are doing and dismissing entire matches after the first six minutes (“I honestly give no fucks right now”); he listens to music on his stream (recently, there’s been a lot of Drake), and has a program making a note of when fans donate to him, with an automated voice reading the messages out loud as he plays. Often, it’s the kind of thing you’d expect to read from a Twitch chat log, and it’s not pretty.

As of this writing, there were over 22,000 people watching him play the last time he streamed. It’s the kind of program you’d expect a 19-year-old to run, and his viewership regularly surpasses many of the Dota 2 scene’s minor tournaments, the ones which don’t have players of his caliber in them. There are other reasons to watch him, however; he is, in his own way, entertaining, and if you know who he is, it’s endearing watching someone you know play a game like Dota 2, where every player is on the verge of losing their temper over a few ranking points. Sometimes, you’ll learn a thing or two about how Dota 2 works. Occasionally, you’ll see something truly memorable happen live, like when two professional players (teammates, if you’re extra-lucky) get matched on opposing teams, or when someone like Arteezy manages to pull off a kill or escape only they’d be able to. 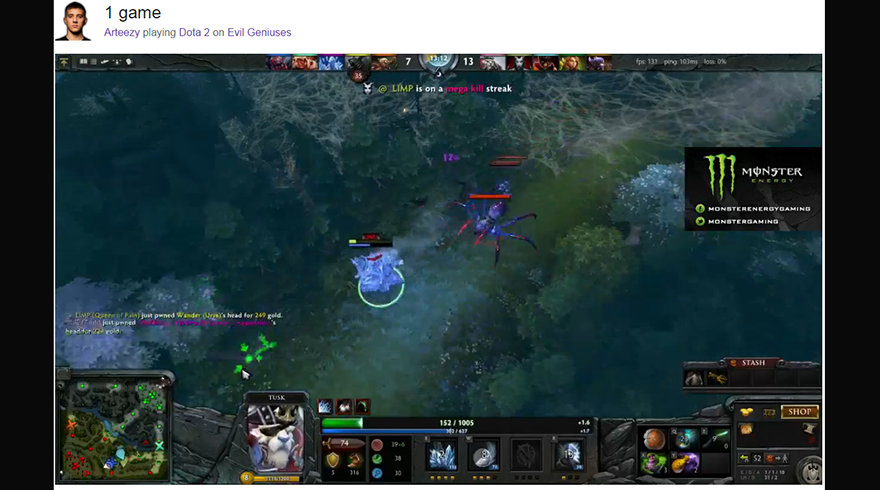 The replays of the best moments will always be there, of course, through instant replay tools like Oddshot or Twitch’s own archive system. But there’s something magical about watching a stream live and seeing “a moment” happen. The first time always has something imbued into it, something videogames have never had before: an aura.

Walter Benjamin first described the idea that art could produce an “aura” back in 1936. His article, “The Work of Art in the Age of Mechanical Reproduction,” contemplates how the nature of art had changed as the ways in which we experienced it changed. Paintings had an aura because they were strictly bound to a singular presence. You had to visit the Mona Lisa, and see what it was, where it was, think about its presence. Much of art makes more sense in context, and seeing art removed from its location, its place in time, removed some of its most important elements. Reproduction through photography and recordings, he argued, removed that authenticity from art. “Even the most perfect reproduction of a work of art is lacking one element: its presence in time and space, its unique existence at the place where it happens to be.” Benjamin was an Old Man on the Internet long before the internet existed.

But he has a point. Reproductions now clearly outnumber “authentic” productions; concerts are greatly outnumbered by CDs and MP3 downloads, plays are still around but are dwarfed by film and television. Digital is nothing if not pure reproductions, and our modern lives embody it. We want these perfect copies, to understand that we are having the best, most perfect experience we could have along with everyone else. Our experiences are different, but the product remains rigid.

Videogames, bound by their digital form, seem like the most intense forms of reproduction, creating entirely new artifices removed from reality or context. Twitch moves the needle further, creating reproductions of these artifices. It turns gaming, an active hobby with the same rules of engagement as reading or sports, into something passive; you don’t even have to perform the act of playing—now you can just watch. Twitch, gaming’s Netflix, allows you to experience a game vicariously through a streamer. Their playthrough becomes your own—another reproduction. You can always go back and play the game yourself, but with as many games being streamed as many younger players are overwhelmed by the number of options available to them, some will choose to experience games through others when they don’t have the time or money to play themselves, or if they’re too intimidated by a difficult game but wouldn’t mind watching someone else suffer.

But then there’s Babaev and every other streamer on Twitch, turning in long-winded streams, every day, producing a “unique existence at the place where it happens to be.” Babaev’s stream is a one-man show taking questions and prompts from the audience. His best moments are sure to be captured live, but they won’t be as impactful as when they happen in the moment, out of the blue and without expectation.

When a startling comeback Babaev makes in one particularly drawn-out match begins at the bass drop for DJ Snake and Lil Jon’s “Turn Down For What,” which just happened to be playing when the turnaround occurred, it’s fun to watch in hindsight. But it’s so much more surprising, so much better, if you happened to catch it live, without the assumption that it would go the way it did—an assumption which would accompany being linked to a Youtube video.

This is live performance art (however schlocky and juvenile), and over 22,000 people are tuning in every day to watch Babaev play Dota 2, engage with the internet’s worst, bemoan his teammates and online opponents, and occasionally make comebacks like this.

This is live performance art

That Twitch is live is an important factor in how it’s able to recapture the feeling of time of place, of creating a form of performance separate from the medium the service uses as its jumping off point. Youtube and its immensely popular Let’s Plays are closer to film and television in their extended and episodic formats, and those have their appeals. But those are still the old models. We wait for these videos to go up, consume them passively, then react to them. Creators change their series over the course of several videos, sure, but that’s simply not the same.

Twitch (and Youtube Gaming) viewers have an agency they don’t have elsewhere. They can suggest games to play during an extended livestream, offer new ways to play the game, interact with the streamers directly. They can heckle, post incoherent babble, regurgitate memes, or in some cases, affect the game the streamer is playing directly. They can call in SWAT teams and make a streamer’s life miserable. They affect the performance. It’s like a play, if the audience were scattered around the world and actors couldn’t feel their presence but hear their comments from across continents.

Babaev’s enormous popularity (and that of Twitch streamers in general) speaks to several things. It speaks, for one, to how big online video has become in general. But it also speaks to the appeal of having something play out live, for viewers to feel as though they’re experiencing something with an aura. Viewers want to know they’re experiencing rare moments that, while not necessarily singular, have a limited supply; only 22,000 people will have experienced Babaev’s best moments live, only hundreds of thousands of viewers will see the next Dota 2 champions crowned. Only a few thousand people will see Twitch beat Dark Souls live.

Ironic, then, that a resurgent desire for the live, raw, imperfect, human moments that come from a live stream emerged from a form of art inextricably linked with technology, in its chase for perfect reproductions. But that people increasingly want not the most perfect recreations of their favorite game (professional play, speedruns, or complete walkthroughs) from their live experiences says something important about the games we play; that more than technical wizardry, we yearn for humanity.