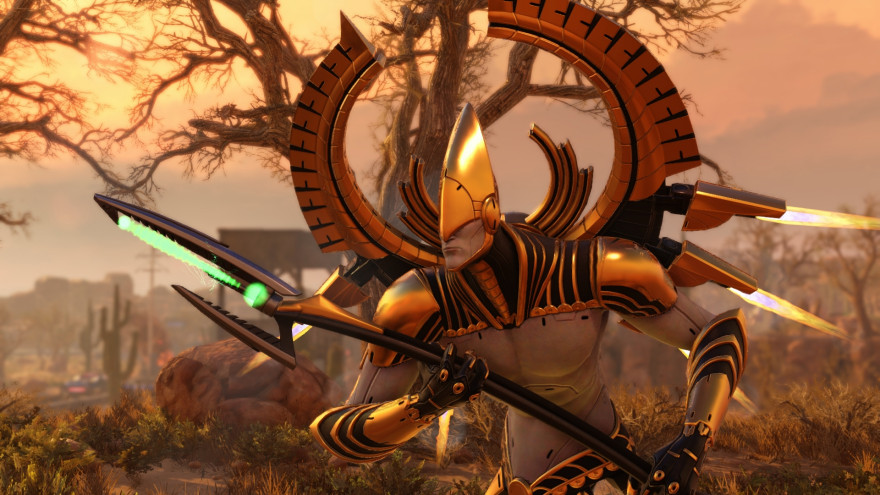 Vigilo Confido goes the motto of the titular fighting force in Firaxis Studio’s excellent XCOM 2. To any English speaker, even one without any specialized knowledge of Latin, the meaning of the motto appears self-evident. Vigilo—vigil, vigilance, or something to that effect—and confido—obviously, confidence. Or . . . wait, is it confidential? In fact, the Latin is intensely and conspicuously ambiguous. Depending on whether or not those final “o”’s are read as nonal case endings or verb conjugations (to say nothing of the tense), defensible translations of Vigilo Confido include everything from “I Am Watchful; I Am Relied Upon” to “Trust the Vigilant.” The vagueness isn’t necessarily bad; either interpretation is a respectable, lore-friendly motto. So rather than nitpick XCOM’s apparent fondness for kinky Latin syntax, why not wonder what it means for a slogan to set up a limited, but evocative, interpretive horizon, rather than the calcifying closure of “meaning.”

There are any number of reasons to praise XCOM 2, although the game is better understood as a theme and variation on its already-fantastic predecessor, 2012’s XCOM: Enemy Unknown (to wit, both are clearly built in the same engine, including some of Enemy Unknown’s more recrudescent visual bugs). Still present is the superb tactical simulator that made Enemy Unknown so fulfilling, enhanced by the more frequent use of timed missions—one of Enemy Unknown’s few faults was that it was sometimes too plodding and methodical for its own good—and a balance overhaul that gives each of the game’s eight classes a more distinct sense of strategic purpose. Technical improvements abound; textures have been sharpened, animations made more fluid, and environments more destructible. Those interested in representation will be happy to learn that XCOM 2, like its predecessor, effortlessly captures the immense diversity of the human world, which underscores the game’s premise of a united human response to an existential threat. In short, XCOM 2 does everything we expect a sequel to do, and well.

But XCOM 2’s most interesting adjustment of the series’ winning formula might be in its approach to the ambient storytelling that imbued Enemy Unknown with such a sense of life. This isn’t to say that XCOM 2 has dispensed with every cliché in the alien invasion playbook; if anything, the game doesn’t fall back on well-worn conventions so much as it gleefully leans into them. The contours of the story are deliberately archetypical: despite the events of Enemy Unknown, the aliens have occupied Earth, placating its citizens with promises of panaceas and global harmony. But, of course, they’re secretly up to no good (slavery, cloning, genocide, etc.) and it’s left to a long-dormant XCOM to gather allies and rise against two decades of extraterrestrial rule. Familiar platitudes cycle though, one after another: a mechanical savant returns to finish her father’s work and alien architecture enters its fascist chic phase, black and red with no curved lines. It’s all very campy, and intentionally so: a talented voice cast deliver line after line with a self-seriousness normally reserved for Dalton-era Bond villains.

But what of it? For years, scholars of games have futzed over the tension between the designers’ intentions and the meanings players inevitably produce in the act of play. Scripted narratives, no matter how well-crafted, are inevitably in competition with those imagined by the player. This debate has a long pre-history in literary theory (see Umberto Eco’s 1962 book The Open Work and Roland Barthes’ 1967 essay, “The Death of the Author”), but is felt with particular acuity in videogames. Simulation tends to produce what game theorists call “emergence,” the unexpected results of the interplay of semi-autonomous elements within a game’s algorithms. The more intricate the simulation, the more difficult it becomes for designers to exert authorial control. This isn’t necessarily bad, but it does point to one of the challenges designers face when attempting to communicate specific meanings to the player. In her talk at GDC 2015, Mitu Khandaker-Kokoris discussed the trade off designers face on a spectrum that stretches between “emergence” and “emotional nuance.” Autonomous behavior might yield wonderful, unexpected outcomes, but it comes at the cost of subtle, authored encounters that only a human touch can create (think The Sims vs. The Walking Dead). Crucially, she argues that neither is inherently more valuable than the other, but that each lends itself to particular kinds of storytelling, and designers would do well to consider whether their intention or their players’ interpretations fit with their creations’ goals.

Enemy Unknown and XCOM 2 attempt, in their own ways, to cleave a path between the two poles of Khandaker-Kokoris’ spectrum. Despite the authored narrative that anchors the progression of each game, both titles tend towards emergence though through their ambient storytelling. Yet XCOM 2 is significantly less emergent than its predecessor. Consider that one of Enemy Unknown’s most loved signature flourishes was the randomly assigned nicknames for experienced squaddies. Upon promotion to the rank of sergeant, each soldier received a nom de guerre from a pool of suggestive titles—Junkyard, All-In, Lockdown, etc. Even so, Enemy Unknown patently refused to reveal what its soldiers did to deserve these sobriquets, even if an obvious connection occasionally presented itself (one particularly agile sniper was called “Spider”). The effect of this randomness was twofold: it implied the existence of soldiers’ subjective lives beyond the tactical functionalism privileged by XCOM’s player-commander, but it also invited the player to imagine how these nicknames came about, that is, emerged. Though, I’ll admit I stopped short of picturing why one of my best grenadiers earned the title “Septic”.

In XCOM 2, though, the distribution of nicknames seems a lot less random. Over the course of the campaign, it became clear that the majority of assigned noms du guerre were based on and referred to a character’s class: my most lethal Sniper was named “Bolt,” my finest combat hacker, “Tinker,” my best medic “Patch.” Others were clearly related to events that took place in the mission prior to a soldier’s promotion: one rocketeer with an acute disdain for private property earned the title “Junkyard” after laying waste to a trio of sedans in addition to the aliens using them as cover. To be sure, a degree of randomness remains: why my soldiers call my backup hacker “Shakes” is a tantalizingly open question. But it’s hard to escape the sense that Firaxis has taken a more active role in controlling the horizon of possible interpretations. XCOM 2 shifts away from the sublimity of emergence and toward the coherence of an authored whole.

Likewise, operation names in XCOM 2 display evidence of a heavier curatorial hand. Enemy Unknown assigned each mission a unique name, randomly selecting a foreboding adjective and pairing it with an evocative noun (supposedly, this formula was modeled after would-be 80s heavy metal albums). The results—Operation Twisted Hero, Operation Broken Crown—were winningly tongue-in-cheek, even if the algorithm was occasionally too random for its own good—Operation Vengeful Vengeance and Operation Hot Mother come to mind. Sometimes, there were happy accidents in which an operation’s title carried an obvious connotation—one Reddit user talks about a raid on a crashed UFO hilariously called “Operation Forgotten Engine”—but, most of the time, the player was simply left to imagine the implications for themselves.

In XCOM 2, though, operation names frequently imply something about their area of operations or the types of alien forces active therein. Missions set in equatorial regions can no longer draw upon boreal adjectives (i.e., no more Operation Frozen Night in Nigeria), which now seem to be reserved for missions set above the 50th parallel, direct assaults on alien installations usually carry a religious allusion, such as Operation Hellborn Altar. To be sure, a connection between the title and the mission isn’t a given—one of my colleagues suffered through Operation Brutal Dirge (!), an incredible name with exactly nothing to do with the sortie it described—but such connections occur far too often to be mere coincidence.

Taken together, the evidence that Firaxis’ approach to ambient storytelling has shifted away from unfettered emergence and into a higher degree of authored branching seems unequivocal. Yet what XCOM 2 gains from this shift is an open question. In Khandaker-Kokoris’s telling, the benefit of authored branching is the potential for a greater degree of emotional nuance, two words that only the most generous critic could write about XCOM 2. But, implicitly, the trade-off Khandaker-Kokori describes assumes that emergence entails the “death of the author,” to borrow Roland Barthes’ legendary phrase. Yet it might be more accurate to say that it’s not authorship as such that emergence puts out to pasture; rather, emergence locates authorship not in a human touch but in a game’s algorithm. XCOM 2 is far from the only game to do this—to wit, any game with an emergent system arguably qualifies—but the subtle assertion of the authorial hand in comparison to Enemy Unknown illustrates it clearly. In a sense, it is not the changes themselves but the fact that they have changed, and what they reveal as a result, that is meaningful. Through comparison, XCOM 2 isolates the authorship in emergence in its ubiquity, like drawing a square in the sand on the beach, and so expands our conception of what it means to be an author and what it means to experience authored works. It asks us to question what we’ll allow to be considered a legitimate “author.” Perhaps the wonder of an algorithm-as-author is not that it tells a story, but that it allows a story to be told at all.

Despite all this, it’s only fair to note that players are free to adjust every aspect of their soldiers —appearance, nickname, nationality—as they see fit, with one telling exception. Whatever scars your squad earns in combat are permanent. As the injuries add up over the course of the campaign, their faces become increasingly disfigured. At some point, you inevitably try to obviate the physical consequences of your commands only to discover that you can’t wish their cicatrixes (or the memories of their making) away. It’s an unnerving moment, because in a game that offers you so much customization, it’s an unexpected declaration of the game’s authority over whatever story you wished to tell. Which means that if you’re willing to listen, XCOM 2 is authoring its own stories at least as much as you are making yours.

Under these terms, XCOM 2 isn’t so much a game about liberating humanity from its extraterrestrial overlords, but a statement about the kinds of stories our games can tell and allow to be told, even when they aren’t especially valued for their narrative. It speaks to the sense that we might not just want stories in our games, but authored fields of narrative possibility. Like XCOM itself, the unseen author of XCOM 2 is ever watchful, always relied upon. Vigilo Confido.