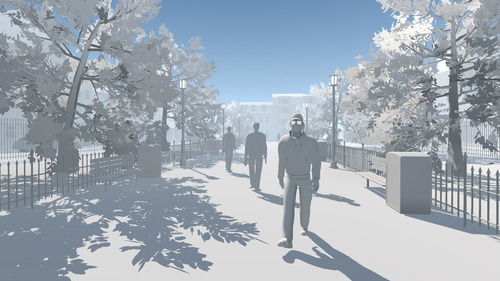 I first happened on Tusmorke’s Autumn buried among the hundreds of entries into this year’s Independent Game Festival (IGF). The game’s page seemed oddly withholding, describing it as an Oculus Rift experience dealing with the aftermath of a sexual assault, but basically leaving it at that. No named creators, no elaborate website for more information, not even a Twitter or devlog to follow. It seemed strange, for such an ambitious project to fly so far under the radar.

After reaching out to the Tusmorke team, consisting of Copenhagen-based students Marta and Mikkel, I learned why. A couple months back, at the same time that IGF set their entrant deadline, the Internet was steeped in culture wars that would make anyone creating a game about empathy and the female experience wary of exposure. “It was such hot waters at the time that even having an IGF page felt really scary,” Mikkel admits to me now. “It’s already a difficult topic to approach,” Marta agrees, “and the climate online being what it was, we had no way of knowing how people would react.”

“Games have the power to deliver human experiences and evoke empathy unlike any other media.”

Once the craziness began dying down, however, both felt that “keeping a low profile could also make a big deal out of something that really shouldn’t be a big deal.” Their work on Autumn began in the first place from a belief “that though games have the power to deliver human experiences and evoke empathy unlike any other media,” the medium’s potential remained mostly untapped. In the end, the very events that made the team afraid of exposure also proved just how crucial their project could be.

Tusmorke describes Autumn as “glimpses into a character’s journey during the months following a sexual assault: her struggles with herself and the world around her.” The story is revealed in reverse chronology and divided by season, beginning with summer, months after the attack and following her transformative recovery into finding a sense of hope. Spring focuses on confronting others, and coping with the feelings of judgement and shame which can too often follow an experience of rape. Winter portrays the deepest pits of her trauma: the fear of leaving the house, constant depression and panic attacks. “Autumn,” Tusmorke says, “is when her life is shattered.”

Marta first sensed the necessity for an interactive experience like Autumn after talking to a group of her guy friends once about her own persistent sense of fear in regards to sexual assault. As she tried to explain just how different her daily experiences could be to theirs as a woman—how her male friends didn’t have to think twice before walking outside their door after dark— she began to see how words just weren’t enough.

So, she “wanted to make a game to convey this sense of vulnerability, to take people through the looking glass,” so to speak, and provide an experience that communicating the fear and powerlessness inherent to sexual assault. “People have a lot of problems understanding what those who have been attacked go through afterwards,” she explains. “The constant consequences: the pity, the shame, the lack of empathy. Understanding their trauma gets obscured by all that noise, and the victims become quiet and paralyzed.” First and foremost, both members of Tusmorke saw a dire “need to change the way we talk about rape, remove the stigma, and stop making the aftermath so difficult for victims.”

Having once been attacked herself (though she managed to escape the assault), Marta used a combination of her own personal experiences along with those of friends, while filling in the rest with diligent research about post-traumatic stress in rape survivors. “While going through the process, I had to fight my own anxieties and fears,” she admits. “But it felt important for me to engage in that process—it was cathartic, in a way.”

“Chase the demons away—confront them, rather than leave them behind as shadows in the back of their minds.”

While creating Autumn, Tusmorke has kept two different types of players in mind. On on hand, they hope Autumn serves as an experience of understanding for those who’ve never suffered an assault situation. On the other, Autumn could also potentially serve survivors of the trauma themselves, allowing them to confront and engage with their emotions both in a safe environment and on their own terms. In their research, the team found that online communities of sexual assault survivors often suggest lists of books and movies that dealt with the topic as part of “emotional trigger therapy.” Many found that, by deliberately triggering themselves, they not only felt less alone but also gained a sense of control over their trauma, using different medias as “a way to chase the demons away—confronting them, rather than leaving them behind as shadows in the back of their minds.”

While Tusmorke is interested in the possibility of collaborating closely with a specialist in exposure therapy, they’re focusing on development for now. The most difficult aspect of design, the team says, has been implementing their research on the experience of vulnerability in post-traumatic stress into effective metaphors. Not only is vulnerability virtually unexplored in terms of conventional game design, but the specific type of fear Tusmorke aims to emulate proves so personal that they often end up second guessing themselves unnecessarily. When Marta came up with the concept of an unending Alice in Wonderland-esque hallway, for example, Mikkel admits that he at first thought the idea cheesy. “But when we tried it out, it turned out to be more effective than I could’ve ever imagined.”

The team also decided to focus heavily on sound, recreating the sensorial sensitivity of post-traumatic stress. “Whenever the protagonist remembers the attack and feels scared, she hears the overwhelming and disempowering ‘sound’ of the attack—replaying over and over again in her head.” As her stress levels rise, the sound of her heartbeat, breathing, footsteps, and rustling clothes increases to uncomfortable levels. “We convey vulnerability by using sound as a sensory overload, while also taking the players controls away to hopefully communicate a sense of powerlessness. These passive mechanics reflect her internal emotional state. In some situations, the player can minimize the effect of these mechanics. But in other cases, we completely remove player agency to emphasize the totality of her fear and anxiety.” The Oculus Rift has been integral to increasing the players sense of presence in the situation, the team says. By scaling the avatar down in size whenever she becomes overwhelmed, for example, the player’s organic vertigo and immobility emulates a panic attack in a way that only virtual reality could achieve.

In the end, however, the Tusmorke team understands that no matter how exactly they try to design Autumn to emulate the aftermath of rape, the “feeling of empathy is a fluid and deeply subjective experience; different people feel different types of empathy at different times.” The successfulness of Autumn as a vehicle for understanding depends not only on them as designers and developers, but on the player as well. “The ability to elicit empathy depends entirely upon the willingness of the player to engage in the conversation,” they assert.

Engaging in that conversation by viscerally experiencing the life of a rape survivor will, of course, prove more difficult than many other forms of engagement. But, from the looks of both the trailer and gameplay video, Tusmorke is on their way to creating an affecting narrative to tackle a simultaneously alienating and concerningly widespread trauma. However difficult Autumn might prove to stomach, the unexamined prevalence of sexual assault in women’s lives (one in every four women in America) should prove a much harder one. As a society, we’ve allowed the epidemic of rape to remain too normalized and too removed from mainstream discourse. Hopefully, providing people with more opportunities to experience even a decimal of a survivor’s experience can communicate not only the need for empathy, but also our own power to take part in a solution rather than inadvertently contributing to the problem.

Tusmorke is aiming for a summer release in 2015. You can follow their progress with Autumn through their website.