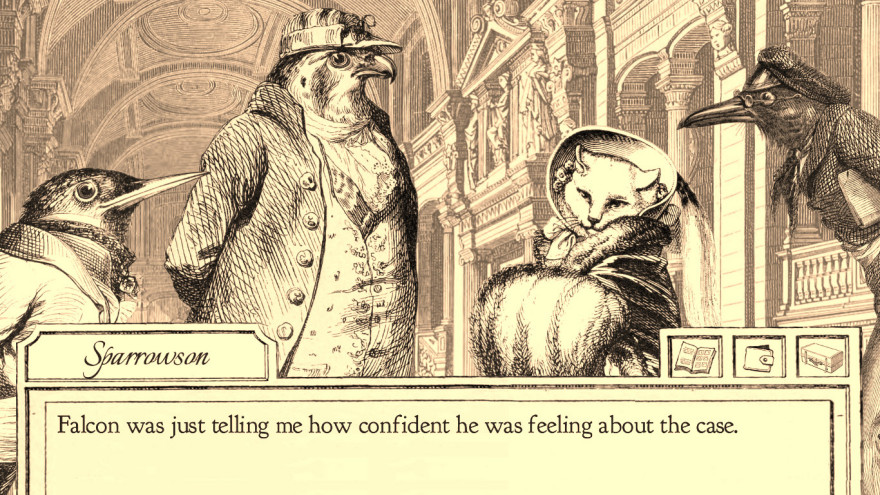 That crows can use adaptable tools or that pigeons possess facial recognition should only surprise the doubtful. Birds have always held a knack for observation, logic, even deduction. But I don’t need science’s testament or anecdotal evidence to reinforce the intelligence of our airborne confidants. I have always known that “birdbrain” was a misconstrued insult, even if a number of them have tried to eat me in the past. I have known these things as I, a mere cartoon frog who reviews videogames, have always recognized and been inspired by the remarkable legacy of Jayjay Falcon, the 19th century bird who wore a tiny hat and was also a lawyer.

While Jayjay may have been a legal representative of the past, you are now in Killbert the Kill Screen Fun Frog’s court. I am the judge. I am the jury. I am the executioner. I am the fun-haver. I will put down the gavel on whether or not this game is fun, so press on. (Spoiler alert: it’s pretty fun!)

Brought to life through the animated portraits of 19th century artist Jean-Jacques Grandville, Aviary Attorney is a visual novel sipped through a Gilliam straw. Recounting the sordid adventures of one feathered public defender, Jayjay weaves the cases of kitty cat socialites, reptilian low-lifes and those that fall in between. All the while, the animals prepare a boiling revolution against the elites within the Parisian streets. Comparable to a famous book, maybe, though none come to mind.

Yet, there is one fun videogame this historical adaptation brings to mind: Phoenix Wright! Capcom’s wacky colorful series about various murder trials, the Ace Attorney games have set a standard for courtroom fun. Golly, it even set the standard for bird roles in the videogame court. But as fun as those games are—and they are fun (and I love fun)—they did leave room for improvement. Making progress often meant having to push along a narrative invisible to first-time players, meaning that puzzles and evidence, deductive reasoning, weren’t prioritized over unforeseeable dramatic twists. Is that fun? It is fun. But I believe it could have been more fun. To criticize Aviary Attorney, the more literal Phoenix Wright, means to launch off a criticism of Ace Attorney, as this game manages to weave around those trappings while stumbling into newer, comparable ones.

a visual novel sipped through a Gilliam straw

Time is of the essence my dear Watson (I am going for a fun mystery motif here, see?), and so time is a value in this bird game. Between taking the case and making them, you must gather evidence and testimonies across barnyard Paris, each site of intrigue taking up 24 hours of your time. However, on multiple occasions the calendar is a ruse: Jayjay and associates are flanked by story developments that knock you out cold, advancing toward the court date without warning. When this happens, you’ll suddenly feel unprepared when you previously thought you had all the time in the world, sort of like when I rent too many fun videogames for the long weekend.

When you are fully prepped for the trials they feel like a breeze. Aviary Attorney is much easier than Ace, regardless of fastballs, but they are on par for entertaining dialogue and charismatic animatics. Though having a fellow frog as the first victim, well, that took some time to process (poor, poor Monsieur Grenwee, I will leave flowers on your grave).

But, more than anything else, I am  glad that one of the key chapters in animal-employment history is being recounted in such a fun way. Without Jayjay Falcon’s worthy service in the court, we’d be looking at a much different world. We wouldn’t have the bird opportunities, dodo lawyers, jury stands full of screaming parrots, or owl judges in amazing teeny powdered wigs and officiary gowns. When I was a younger frog, Jayjay inspired me, maybe I, Killbert the Fun Frog, could represent the innocent or the oppressed in the court of law, perhaps aid in actuary or immigration. But that was, of course, before I discovered fun videogames, and found my true destiny.

Besides, they do not allow frogs in court. That is a fight for another day. And perhaps, oh, perhaps, they’ll make a fun videogame about the amphibian hero who changes that. We, my fellow frogs, are more than Battletoads, brawling in the arena for your sickening amusement.