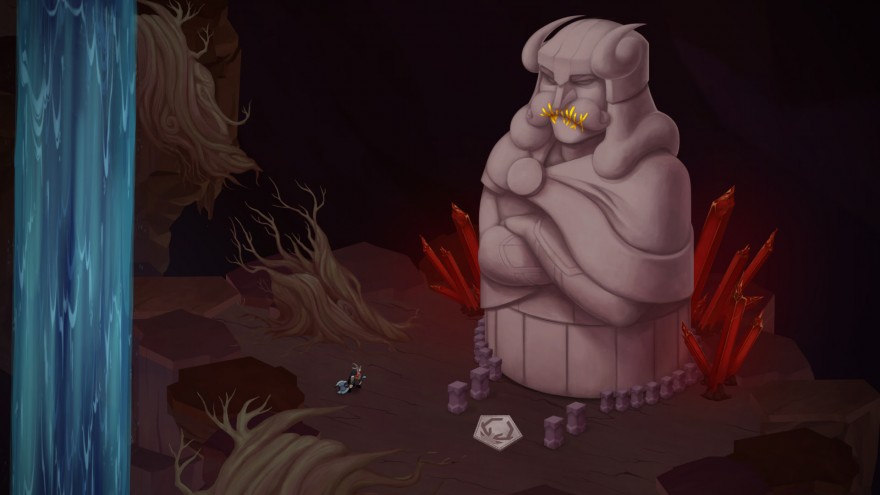 Jörmungandr, the serpent that circles the earth, writhes beneath the surface of a frozen lake. Its shadow darkens the deep places below the ice before breaching the surface and throwing the warrior Thora from her careful footing. Though its apparent size dwarfs the Viking woman who dares cross the lake, the immensity of the serpent’s body is incalculable, extending fathoms beneath the water and wrapping the earth in an unseen mass of scales and muscle, hardened by eons of patient existence. At the onset of Ragnarok, the serpent will poison the sky and kill a god, but for the moment it waits, biding its time until the end of the world.

Among Jotun’s many accomplishments is its understanding of scale as a window into mythic worldbuilding. The game, like many myths, provides the barest of plot structures more concerned with offering insight into a vast cosmos than explaining the nuances of character motivation. After her inglorious death at sea, the Viking warrior Thora struggles to earn passage into Valhalla by proving her worth to the gods. From this sparse bit of story, Jotun weaves a tale not about some battle between good or evil, nor does the game construct some “damn-the-gods” narrative about the triumph of the human over unfeeling deities. Instead, Jotun treats its subject with the reverence of a Norse Edda, turning the elements of an ancient poetic tradition into a digital myth.

Jotun goes to great length to make the world feel not only ancient but enormous, and one way it does this is by making Thora’s motivation as direct as possible. Her role as a character is secondary to her purpose in facilitating the player through a mythos built on the concept of fate and honor. Her strength and resolve become her defining characteristics, exercised in her limited arsenal of a battle axe and a handful of abilities obtained through the blessings of the gods. While she occasionally reflects on her family history and the world around her (always speaking in Old Norse), Thora mostly communicates through actions. Her willingness to perform tasks for unseen gods and her prowess in combat fulfill any expository needs, making the story about her deeds and her place in a vast mythos rather than a personal history.

Accordingly, her journey to the halls of Valhalla is equally direct, split between exploring relatively quiet areas consisting of puzzles or very few enemies and battling with giants that give the game its name. The relative simplicity of this design overlays the intricately detailed environments and equally masterful score. Sliding down the roots of Yggdrasil, the world tree, or exploring a dwarven forge reveal a world with the epic grandeur befitting a Viking legend. Thora often describes in Old Norse the world around her as the camera zooms out for expansive vistas, especially when the camera pans over vast landscapes and in the process makes Thora a barely visible speck on the screen.

This visual technique of manipulating size provides the aesthetic heart of the game and uncovers a certain romanticism in the language videogames use to explore a much older medium. The player and her role in helping Thora reach Valhalla seems miniscule and impossible when she must defeat a character fifty times her size. Given that games often use huge enemies as a shorthand visual representation of power imbalance, the size difference that separates Thora and the giants is nothing unique to Jotun, and a battle against one of the game’s five Jotun transforms into an epic trial of patience and precision.

Scale, however, is never just an indication that something is an enemy. Moreso than tests of skill, the game treats these battles against giants with veneration. The Jotun, for all their elemental fury and infuriating difficulty, guard the thresholds of hallowed ground from the unworthy. Consequently, the Jotun never stand out as evil antagonists out to destroy the player. Rather, they are elemental representations of the world and the mythic cycle that provides that world’s rules. Whether struggling against the gale-force blizzards eschewing from the frost titan Isa or dodging the thunderbolts of the storm Jotun Hagalaz, combat against these giants seems epic enough to shake the pillars of creation. Fighting a Jotun, then, is an act of reverence, an encounter with the sacred connection each of these colossal figures has with the world that gives them life. Meeting these colossi in battle begins a holy ritual that carries the somber drama of a skaldic recitation.

At its core, Jotun is a game about belief as much as it is about battle. As I played Jotun, I kept waiting for that moment when Thora realizes that cruel gods and their ancient rules are the true villains barring her entrance to Valhalla. Thankfully, that moment never comes because, for Thora, the battle is enough to fill a warrior’s heart. To make enemies of the gods and the governing power of fate would profane the intense sincerity the game establishes. This deep appreciation for an ancient tradition of storytelling earns Jotun its rightful place as a new Edda, one that taps into the sacred roots of myth that extend through the ages, reaching out to untold worlds and to the end of time.