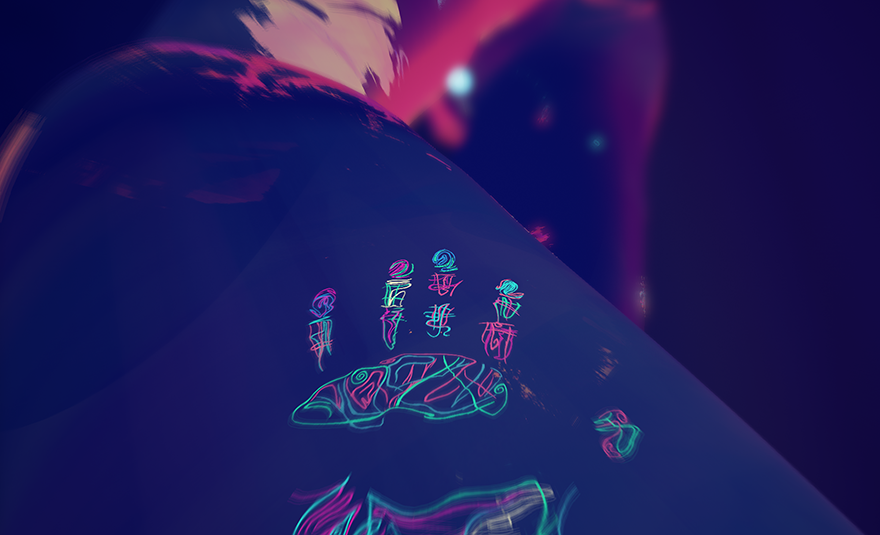 Just Feel is a project created by a team of seven students whose aim was to “mention sensuality and the pleasure in a poetic and subtle way.” Although I wouldn’t use the word subtle to describe the game, the goal was to “show sensuality without taboo and vulgarity.”

The experience is meant to be a virtual embodiment of caressing a body—more specifically, a female form. Delving into the concept of sensuality from an artistic angle, it appears the game is not concerned with any sort of social commentary. However, it’s hard to play this title and not feel conflicted.

an attempt to reduce the body to basic shapes

In the game, a bright neon handprint glides slowly across the length of a faceless woman’s stomach, creating colorful splotches across her skin that look like brush strokes. Once the pattern is completed, the paint lights up a few times before the camera pans to a different section of the body, instructing you to begin your journey over what you later find out is her breast. In an attempt to reduce the body to basic shapes, or perhaps in service of their goal to approach pleasure without vulgarity, there is no nipple.

You follow swirled dots that mark where your hand is supposed to travel, and are offered various shades of blues and purples. Soft music plays while you explore. It’s almost reminiscent of tagging a wall with graffiti before moving on to other parts of the concrete canvas, except your hand print is the graffiti and her body is the canvas. It’s hard to tell where exactly on the body you are at some points during navigation. The game ends suddenly: you may be sliding your virtual hands in between the faceless woman’s legs, and the game slowly fades to black without warning.

The whole experience takes roughly 10 minutes. Although it is artistic and the color palette is visually appealing, the subject matter leaves behind some thoughts to be considered. Just Feel chose a beautiful female form as opposed to a male, yet society has conditioned us to view these bodies sexually, and so that design choice ends up seeming counter-intuitive. The mechanic of using a hand to facilitate the study of a woman’s body also doesn’t serve as a perspective that communicates the subject as a person, but rather a shape that is a vessel for exploitation. While you may feel awkward exploring this body, the one thing that might really pull you out of the experience is seeing the Barbie version of her crotch.