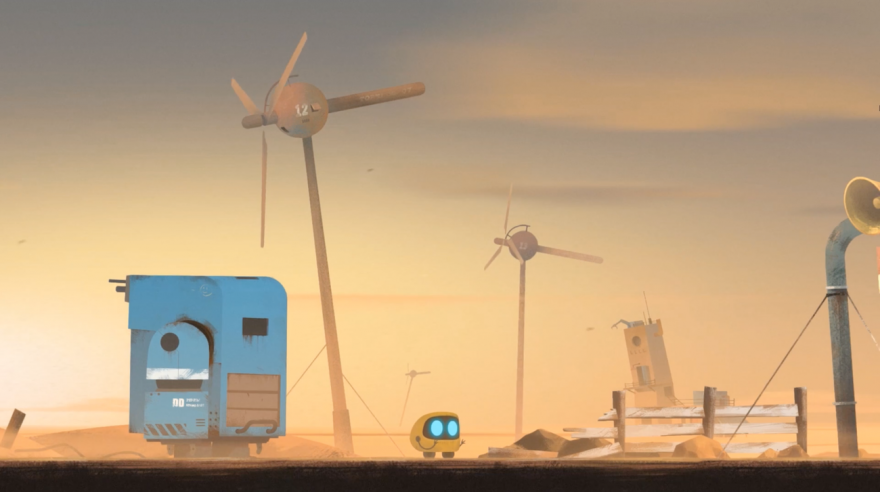 A young boy, seen through a viewfinder, discusses the ocean with his mom. The screen buzzes; the boy disappears; two eyes blink open. They belong to a little metal carapace that scrambles around an empty room, tugging at switches and saying, “Hello?” The boy is nowhere to be found, but the bot keeps looking, earnest and determined.

This is Abi, a new story-focused puzzle game from Grant&Bert Studios. It resembles WALL-E (2008) in its story, which similarly follows a pair of robots wandering around the remnants of Earth after human beings’ mass exodus. You play as two droids that used to serve humans as helpers before their disappearance. ABI, the titular bot, was a parenting and caretaking unit: the creators released a Fallout-esque commercial for the robot, which stepped in for lazy or overworked parents. The other robot is DD, a hulking, sentient industrial robot that was used for production before the humans left.


Abi is a puzzle game, and you’ll have to maneuver these two cute bots around their fledgling robot society to in order to continue their adventure. But the real charm is the animation style, which evokes Pixar’s short films, and other stylish animated movies like Song of the Sea (2014).

it would rather look like a cartoon than a game

Abi breaks through the retro-pixel-platformer art trend that has dominated in recent months and instead opts for a distinctive yellow-and-blue color scheme and lovingly handcrafted character models. Like the upcoming languid adventure Old Man’s Journey or the much-anticipated Night In The Woods, it would rather look like a cartoon than a game. And a beautiful cartoon it is.

True to the tradition of cartoons, Abi’s story is about friendship and joy. You’ll encounter obstacles as always, and explore a multitude of beautiful environments while deciphering puzzles, but the core of the game is still your two little robot buddies: ABI and DD will travel the world, unearth their story, and reinforce the eternal power of true, Disney-esque love.

Abi will start a Kickstarter in the next few months; for now, check out its website.