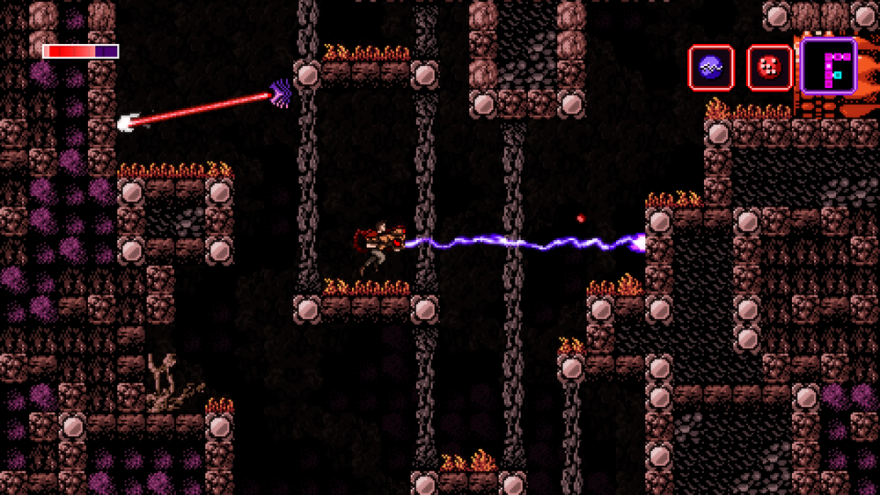 “Lots of good brands this year.”

That was my snarky running gag all week at E3. It was easy to succumb to the business-as-usual-ness of the games industry this last week: Plenty of the games we saw last year are back with a higher numeral after their name.

Fortunately, smaller games are starting to become a bigger part of the conversation. Once I brushed past all the big sequels, for me, this E3 felt hopeful as many major studios are inadvertently becoming training grounds for tomorrow’s smaller games. This concept is nothing new, really, but it was so pronounced at E3 that that tomorrow is starting to feel like today. Glancing around Sony’s booth, I was reminded how many more chances consoles are allowing  to create their games, follow their visions, and find new audiences they couldn’t otherwise.

Tom Happ is one such individual. His PS4/Vita indie game, Axiom Verge, is slated for release either February or March 2015. Although it wasn’t mentioned during Sony’s conference, Happ’s game is very indicative of the aforementioned opportunities.

He is the sole programmer, artist, and composer for Axiom Verge.

Happ has been around for a while. I’m not calling him old; he’s just very experienced in the games industry. He’s worked in studios since 2002. As a character animator on Crash Nitro Kart. He created shaders for Tiger Woods PGA Tour ‘08 and ‘09, authoring programmable shaders for PS3 and Xbox 360, making waterfalls, oceans, and terrains. He works for Petroglyph Games, whose RTS Grey Goo was also at E3.

Happ wasn’t manning Grey Goo. Seemingly all week, he was at Sony’s booth, sitting next to his game.

It’s fitting: He used his experience working on major-dev games to make his own game.

It took him nearly five years. The one thing Happ hasn’t done yet in his career, he explained, is completely develop a game on his own. But he is the sole programmer, artist, and composer for Axiom Verge.

“I’ve always been tinkering with things,” explained Happ. “It’s not something I wanted to jump into without any guarantees.”

Thanks to Sony’s indie pub fund, since February, Happ has been working part-time on Grey Goo and devoting most of his time now finishing his labor of love. It’s been a long road for the Metroidvania action-platformer. The sci-fi game itself is also pretty inventive: Imagine an 8-bit game where your character explores all the glitches, mistakes, and black outside the map you’re supposed to stay in, and you’ll start to get the picture of what this game is about. You get a glitch gun and can alter the world around you unpredictably. As intriguing as the game is, though, Happ’s story is a bit more interesting because of what it means for games overall and where we’re headed.

Five years might seem like a long time to see a game through, but it’s exactly what Happ predicted when he started developing in earnest. At that time, Fez had not yet been released and the “indie-games scene” hadn’t yet become the leviathan that it is today. Inspired by Braid, Happ decided to make a game.

Axiom Verge will run about eight hours, and, for a seemingly simple retro title, it’s awful forward-thinking with some of its forthcoming features. To fully explore the game’s glitchy inspirations, the game will come with a “Game Genie” mode, where you can enter codes and passwords to completely and unpredictably alter the game’s world, scramble weapons or … who knows what. There will be a finite number of things you can to mess with in the game, Happ says, but it will provide enough variety to likely warrant additional playthroughs or at least second and third looks.

There also will be a speed-run mode, which bypasses all the cutscenes and will display an onscreen percentage meter for item collection and map exploration.

Had he not gotten in on Sony’s pub fund, Happ explained, Axiom Verge would have taken even longer to come out. True, 2015 is still a ways away, but, for what it’s worth, the game is coming along at a nice clip and is looking very, very thoughtful—which was hard to say about much of E3 this year amongst all those brands doing business as usual.