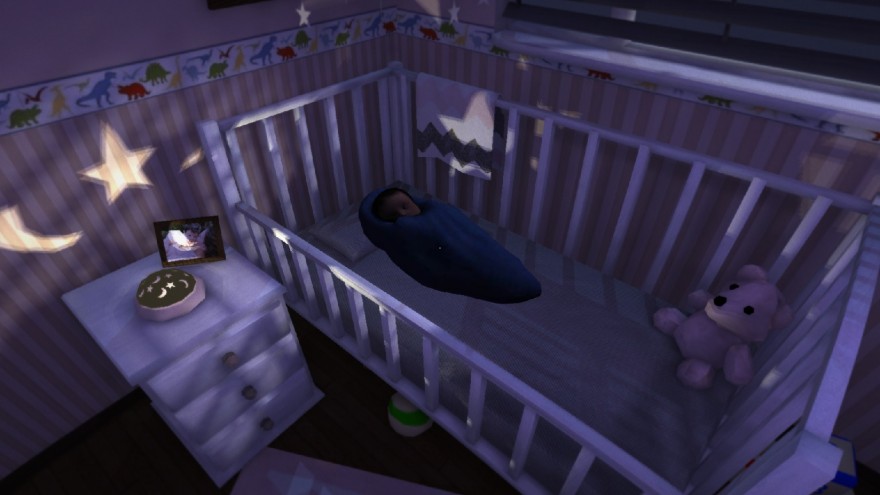 The idea behind Asylum Jam, now in its second year, is to create horror games that don’t rely on negative depictions of mental health. If you put some thought into it, you may find yourself surprised at how many videogames stigmatize psychological issues. Horror games are especially deplorable for countlessly re-using insanity and psychiatric wards as the source of their horror.

So it’s up to the teams that willingly enter Asylum Jam to, in only 48 hours, create a horror game that explores different frights and fears. This year, one four-person team created Lullaby, which speaks to one of the most terrifying and universal of human horrors: looking after children.

thoughts of child killers, kidnappings, and toddlers falling down stairs.

It’s night, a loud downpour insulates any noise coming from inside, and you’re stuck in a stranger’s house looking after their tiny baby. Lying in its crib, the baby’s default status is bawling its eyes out. Upon starting the game and hearing the wails I couldn’t help but roll my eyes back with a sigh; it’s a horrible noise, one designed to grate against the core of our primal instincts.

Having not brought a child into this world as of yet, I’m unqualified to discuss the terror that belongs with the parental instinct. How it drives your mind wild with thoughts of child killers, kidnappings, and toddlers falling down stairs. I have watched The Poltergeist though, and felt for the Freelings as Carol Anne was stolen from them by evil spirits. And David Bowie’s depiction of the child-stealing Goblin King in Labyrinth still gets under my skin. Although that may have more to do with the way those tight trousers pull around his crotch.

I’m kidding, of course. What I am aware of is how having children steals all of your time, with you having to base every decision around them, and having to let down friends when they want to see you. Yeah, I’m that annoying 25-year-old guy who rings you up to invite you out but, of course, you have to look after the kids. I have it so easy, I know.

Babies divide your time and attention right down the middle. On one side falls the chores you have to do that day, and on the other are the urgent needs of your diaper-filling, food-flinging bundle of love. This conflict is where Lullaby finds its horror.

You can pick the child up to hush its crying and, oh, it is bliss when you do. But you need to explore the house—out of curiosity at first, to escape a little further in—and holding the baby disallows you to interact with anything and everything. So, you put the baby down, but you discover that its crying is attracting the attention of a ghastly dark spirit. Pick the baby up again, and the spirit creeps back into the hole it came from. You proceed, then, by frantically searching for buttons, power sources, and keys around the house, while rushing back-and-forth between the crib to prevent the need for an exorcism, or worse.

I found myself cursing the slow speed of the old software

There’s one moment in Lullaby that particularly stood out for me, mostly because it had me trapped between nostalgia, laughter, and panic. With the game being set during Christmas Eve, 1995, when Lullaby tasks you with booting up a laptop, you’re left waiting for Windows ’95 to boot up while Nosferatu’s fart (Nosfartu?) creeps up on the child in the next room along. I found myself cursing the slow speed of the old software, and then relaxing almost too deeply at the sound of its familiar welcome jingle.

For a glorious moment, I heard nothing but THIS drowning out the baby’s cries. No surprise that the childless guy was more attached to an old computer sound than protecting the life of a baby, if only for a few distracted seconds, huh? Man, that sounds terrible.

You can download Lullaby for free over on Game Jolt.