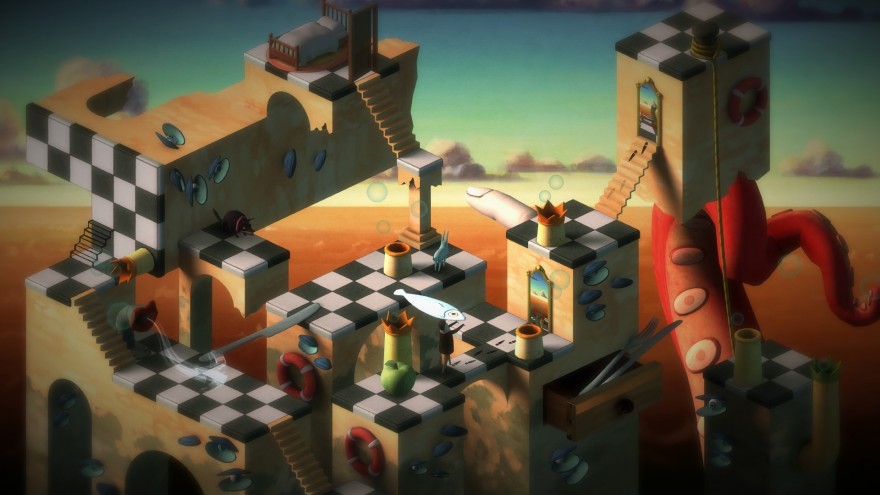 From the melting clock to the overgrown green apples, the paint-chipped fingerprints of René Magritte and the flamboyant moustache of Salvador Dali are all over the topsy-turvy dreamscapes of Back to Bed. This puzzle game about escorting a somnambulist named Bob back to his duvet using the physical manifestation of his subconscious—a green dog-like creature called SuBob—is essentially every famous surrealist painting mashed together and made virtual.

The other recognizable influence are the conceptual drawings of impossible structures by noted graphic artist M. C. Escher. These aren’t necessarily recreated in Back to Bed as the surrealists’ works are, but are alluded to through distorted staircases that head off in directions opposed to gravity, and blocks of architecture that seem to be simultaneously above, below, and adjacent to each other.

the special atmosphere his works create.

Bedtime Digital, the team behind Back to Bed, talked to us about its fascination with surrealism and Escher’s architecture. This was done in advance of the game arriving on PlayStation 4 and PlayStation Vita this August. But we were also able to briefly touch on how Bedtime Digital is looking to expand upon the ideas within Back to Bed with its next game Dream Factory. Read the Q&A below for the details.

KS: Back to Bed started as a student game. How has it changed and been added to since that initial idea up until these new PlayStation versions?

So, actually, instead of continuing to build more levels and adding features to the game, we decided to start over with the level design. Take what we learned from the student version and then handcraft all new levels that were not only beautiful to look at but also challenging and fun to play. On top of that, we’ve created a whole new “world” with new unique visuals that are even more surreal.

We also focused on making the game more accessible and not too punishing to the player. But we also added a hardcore “Nightmare” mode that you unlock when you beat the first 30 levels that tests the skills of even the most hardcore puzzle gamers. You want a game to be easy to learn but still hard to master, right?

KS: You say that you were inspired by M.C. Escher. Was it his impossible structures specifically and, if so, what about them grabbed you?

It was partly the impossible structures that he is so famously known for but also the special atmosphere his works create. It can almost seem a little creepy at times, but still too intriguing to take your eyes off of it.

KS: Did you struggle at all to recreate the twisted logic of Escher’s structures – any particularly challenging moments you can remember? And do you feel that you were successful in adapting his ideas to a 3D puzzler?

We feel that the spirit of M.C Escher carries over well in our game, and his twisted logic or “Dream Logic” as we call it, has contributed a lot to the game. The impossible structures idea was a challenge at first, but once you learn a few camera tricks, it’s actually fairly easy to pull off. The real challenge is getting actual gameplay out of the “dream logic” such as shifting gravity to walk on walls.

the idea of having the game world look like a dream

KS: Surrealist artists such as Salvador Dali and René Magritte also factor into Back to Bed. What did you take from these two artists and why did you feel surrealism was a good match for Back to Bed?

The game mechanics of guiding a sleepwalker came first, and then our art director came up with the idea of having the game world look like a dream, which is what surrealism is all about so that was a great match. It’s really something that makes Back to Bed stand out and it’s often what draws people in at first when we showcase the game at events like E3 and Gamescom.

KS: You’re continuing to explore the same type of surreal architecture in your next game Dream Factory. What’s your fascination in creating these environments – what does it satisfy for you?

We kept hearing from people that played the game that they loved it. But they really wanted more time to go and explore this surreal crazy world. So, naturally, we wanted to give people this chance to do this in our next game.

KS: What have you learned from Back to Bed about creating these types of landscapes that have informed Dream Factory? What are the big differences in the structures you’ve made for Dream Factory when compared to Back to Bed?

I guess you could say that our next title takes a step deeper in to the world of dreams. You will still find small references to surrealism throughout the game, but we rely much less on inspiration from other peoples work this times around, and we try to create a world of our own that is cohesive and self-contained.

Back to Bed will be out for PlayStation 4 and PlayStation Vita in mid-August. More information on Dream Factory can be found on its website.