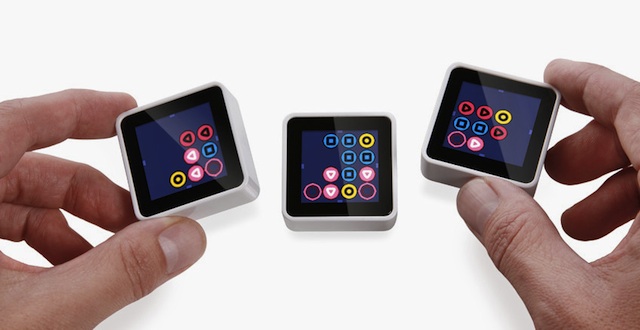 Sifteo Cubes have waltzed onto the landscape of toys and games as the first new item that spins into the same design conversation with Apple, Lego and Nintendo, not a bad three-circled Venn Diagram to be lounging in the middle of. If you haven’t heard about Sifteo yet, then consider it my honor to introduce you to the future of toys via a discussion with Sifteo’s president and cofounder. David Merrill is an expert in cutting-edge human-computer interaction, producing multiple award-winning interfaces and technologies that reinvent how people use computers.

What were some of your favorite toys as a kid?

Lincoln Logs. A set of wooden blocks that my dad made for me that he cut from two-by-fours. Matchbox cars. Lite-Brite. I was into toys for building, and toys that felt like small precious objects.

Blocks are among the oldest toys in existence and to this day stand as perfect tools for playing with spatial relationships, and building things. As such, there have been hundreds of designs, dozens of materials, and all sorts of ideas about creating the best new block. How much does Sifteo think about blocks?

Blocks are definitely an important part of the Sifteo origin story! When we first came up with the idea of hands-on interaction with collections of little objects as a way to manipulate digital information and media, we were inspired by how our hands easily grasp things like Legos, Scrabble tiles, alphabet blocks, etc. Sifteo cubes can be grasped and moved in similar ways. These days a lot of the new development is in our games group, and the team gets inspired by tile-based games like Rivers, Roads and Rails and Hive when creating new game designs.

Can you talk about the self awareness we will see in toys and other things in 10 years?

Every day it gets easier to embed sensing, processing, and wireless communication into everyday objects. For the most part, we have the mobile phone industry to thank for these advances—the proliferation of smartphones has made the necessary components cheap and plentiful. There is a research movement that has labeled its efforts “the internet of things,” and the goal is to find out what happens when more of the devices around us have “smarts” and can communicate with each other. Some really neat, experimental work has been done there—and we’re also already starting to see some neat commercialized examples: phones that know where they are using GPS, pedometers that sync your movement data to the cloud via your computer or phone, pens that remember everything you write, and balls that you can remote-control with your phone. Going forward, this trend will increase and we’ll start to expect our devices to be responsive and interconnected. Our attention to design must keep pace with technological possibilities though, so that all these devices are easy to use! One last thought: The games of the future will be a lot more like the classic games of your past than you can imagine. We’ll continue to borrow ways to play from the long human history, mashing those patterns up with interactive possibilities, for designs that feel nostalgic and familiar yet futuristic at the same time.

In classic videogames, the player’s hands manipulate a control interface while their gaze is on the screen. That way of playing has been very successful but it only captures a certain slice of how we interact with non-electronic objects in the world.

Essentially, are the Sifteo blocks game controllers with screens?

The idea of a “game controller” comes from classic videogames where the game visualization and the control interface are separate. In classic videogames, the player’s hands manipulate a control interface while their gaze is on the screen. That way of playing has been very successful but it only captures a certain slice of how we interact with non-electronic objects in the world. Some other newer interfaces, for instance touchscreen-based systems, are moving toward co-located input and output.

Moving digital information around via familiar physicality, like with blocks, has far reaching implications for the future of computing. Can you share some thoughts on that?

Researchers have been forecasting meaningful connections between physical objects and information for more than 20 years. In a 1991 article for Scientific American, researcher Mark Weiser predicted a future in which people would interact with information using devices of three distinct scales. He called them walls (large, body-sized gesture interfaces like the modern-day Kinect), pads (handheld tablet computers the size of a legal pad … does that ring any bells?), and tabs (inch-scale computers that would be scattered around your physical desktop). Weiser thought tabs would be useful for moving information from place to place; for instance, to move an application context to a colleague’s computer. This vision of small computers as containers for information may prove to be one good-use case—thumbdrives do this. In fact Ullmer, Ishii, and Glas prototyped the “container” use case in their 1998 MediaBlocks paper in a really nice way—but at Sifteo we are much more interested in the kinds of “dynamic interaction with information” that a user interface comprised of neighbor-and-motion-sensitive blocks enables.

An interface like Sifteo cubes that is all about creating arrangements of information items allows ideas to be tried quickly with instantaneous feedback reactions from the application—whether the sequence being made is a number-puzzle solution or equation, a spatial-reasoning game scenario, or a possibility for seating guests at your wedding. The result for play is that Sifteo cubes afford a hands-on, face-to-face play style that is fast-paced and combines the feel of classic games with the interactive nature of videogames. The big picture for the future of computing is that human-computer interfaces that let people try out possibilities quickly using natural, efficient interaction styles can extend the capability of human thought and productivity.

I notice that you are opening up Sifteo cubes to developers. Are the cubes an example of open-source hardware? And, will it be easy for non-developer types to also put their own content on the cubes someday soon?

We have released a software development kit (SDK) that allows developers to write games and apps for the system. This isn’t quite the same as open-source hardware, which would mean that we’d put the schematics for the circuit boards online so that people could modify the hardware easily or make their own copy of the hardware. Rather, we’re exposing what we think will be the most useful level of tinker-ability, which is at the level of software that runs on the computer (inside our Siftrunner application). This is the level where the developers in our game studio operate, writing code that has a high-level access to the cubes over the wireless radio link so it can control them during play. We know that we’re not the only ones thinking of creative uses for Sifteo cubes, and we’re excited to see what people build!

To answer your second question, yes, we are working out our submission process, so that people can distribute their apps through our store. Stay tuned for more on this soon. Without writing any code, people can use our Creativity Kit to customize game templates by inserting their own content—they can make word lists, build quizzes, and issue challenges to friends, family or students.