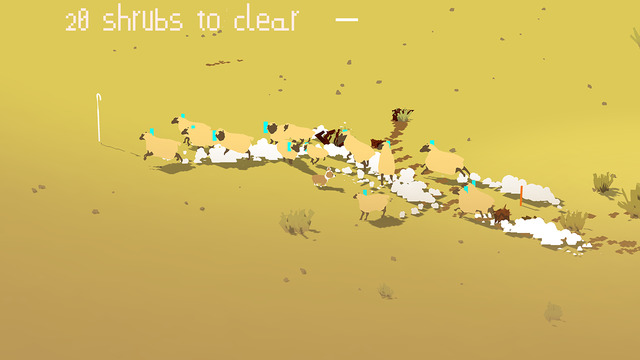 If you only know corgis as those cute dogs from the internet, Cowboy Bebop, or movies where someone visits Buckingham Palace, you might not know that the tail-less fuzzballs are actually bred for herding cattle. Having grown up with corgis as household pets, their herding instincts are often present, even in the absence of farm animals. When I’d attempt to slowly pull my car into the garage, there was typically a corgi blocking my path as if it wasn’t my turn to park. If I’d walk around the house barefoot, often one of the dogs would nip at my ankles to corral me toward a different room (perhaps one with treats in it). That’s animal instinct at work, and eventually you either concede to the corgis’ whims or you negotiate a truce (again, the treats).

Bad Corgi courts defiance and disorder above all else

In Bad Corgi, a new app from artist Ian Cheng, you “embody” a corgi to help herd a flock of sheep. Well, perhaps “help” isn’t the right word. In your role as a bad corgi your goal is to do the opposite of maintaining a perfect herding formation—running amok among the livestock before entering into an uncontrollable fury that sends your perfection rating infinitely deep into negative figures. After one session it’s clear that Bad Corgi courts defiance and disorder above all else.

Interestingly, Bad Corgi is billed as a mindfulness app and sorted into the Health & Fitness category of Apple’s storefront. Cheng sees Bad Corgi as an experience that allows players to engage with our human instincts. those that don’t want us to be perfect but would prefer to misbehave. At a certain point in Bad Corgi, your corgi is so bad that it flashes the text “beyond control” in the middle of the screen as shrubs and sheep smolder and scatter in your corgi’s wake. There is a certain satisfaction in being a bad corgi, and even if it’s just a cute little scenario, there is a devilish glee to the endeavor that is somewhat cathartic.

Cheng is largely known for his simulations, composed of vast spaces occupied by various floating objects. These simulations act as test chambers wherein each object has its own relative entropy among other physical properties. There’s no “goal” in these simulations except to witness how the objects interact with one another in their live environments. Viewers relinquish control from the very start as the algorithm dictates what happens where.

Bad Corgi splits the difference between Cheng’s simulations and videogames, granting a certain amount of player interactivity, but never letting you be totally in control. I guess it turns out that not all corgis can be appeased with treats.