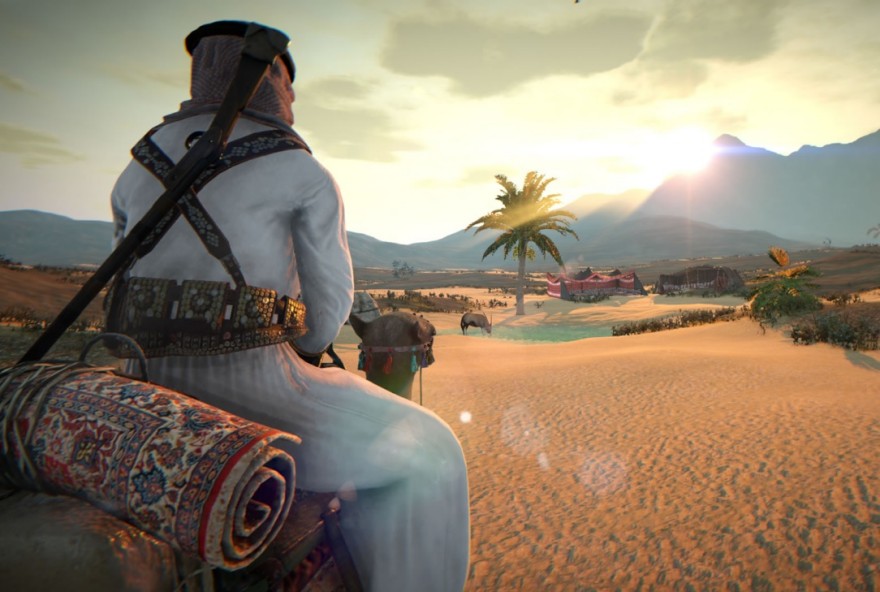 “Sometimes showing things just the way they really are is the biggest contribution you can make toward the cause,” explains Ahmad Jadallah, the director of development at Saudi Arabian studio Semaphore. He’s looking to help fix representation of the Arab world in videogames, and hopes that his team’s upcoming survival game Badiya will be able to do just that.

Badiya looks to capture a key point in the desert’s history as it takes place just after the events of the first World War. Those familiar with Saudi Arabia’s establishment as a kingdom will know this period as when the unification of Saudi Arabia was occurring. While the real life events had the area conquered by the House of Saud, Badiya will instead focus on human life during the violent period. One where it was a struggle just to survive.

Semaphore is viewing their upcoming title as a period piece, and are implementing aspects of the local culture (such as falcon hunting and pearl diving) into it. That said, they’re also looking to make a more relatable experience and not just an interactive history lesson. “With Badiya we decided to avoid using any names for people, places or factions [and] flags,” Jadallah told me. “The reason for this is that we wanted to focus on the core of the game which is survival as opposed to narrative.”

The rich culture is one of the reasons why Semaphore’s past games, including Unearthed: Trail of Ibn Battuta (2013), have focused on the Arab world. “We have plenty of great stories to tell from this region be it from fiction or from real history and we want to tell them to the whole world and not just to the Middle Eastern gaming market,” said Jadallah. “There is a lot of misrepresentation in media with regards to this region and we aim to remedy that.”

While huge releases such as Call of Duty: Modern Warfare 2 (2009) have tackled the region, it hasn’t always been the most accurate representation. Infinity Ward’s popular shooter infamously used Arabic in their map set in Pakistan, despite the area speaking English and Urdu. Jadallah says that there have been good attempts in the past, but “not enough research was performed and instead it was easier to just fallback to stereotypes in many cases.”

“One key element of representing culture is language and that has been suffering in games lately,” explains Jadallah. “[There are] flipped letters, broken words, misspelling, meaningless translations, and wrong voice accents to name a few.” This is especially timely considering that Vlambeer’s Rami Ismail recently pointed out how Captain America: Civil War failed to properly check the Arabic in the film’s United Nations logo.

Jadallah knows that changing representation won’t be an easy thing to push, as it’s “a huge task [that] puts us against decades of negativity in games, media and movies in general.” He views his studio as “part of a collective effort that should be made toward that goal.” One of the ways Jadallah hopes to educate is by making Semaphore’s games playable by as many people as possible. In order to do this Unearthed: Trail of Ibn Battuta was translated into over 20 languages including Farsi, Hindi, and Malay. That said, Semaphore doesn’t want to limit themselves creatively, and are “planning to develop games with global themes and settings.”

When I asked how the Arabian desert would present unique opportunities for the survival genre, Jadallah said it would bring something new to the table as the genre often focuses on post-apocalyptic themes. “We aim to change that by presenting a realistic environment and in a rich time period where survival was really hard.” This means in Badiya, players won’t be battling against zombies, but against other humans and the dangerous desert itself.

Another area where the game is attempting to innovate is by presenting a procedural narrative within Badiya. While it won’t be available in the first playable alphas, the system will create “a unique story/quest is generated for every player.” This won’t be the end goal for players in Badiya, as Jadallah told me that just like in real life “the end of one story is simply the beginning of a new one.”

Badiya is releasing on Steam Early Access “soon” and will later come to PS4 and Xbox One. Find out more on its website and check out the trailer on YouTube.