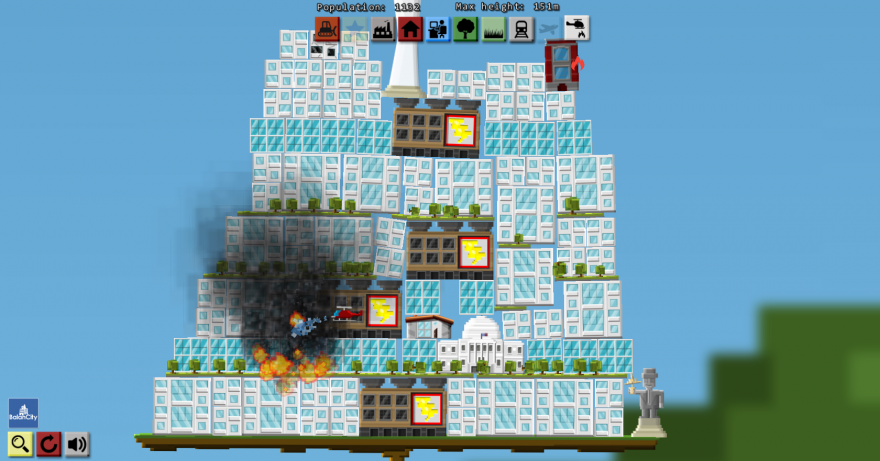 BalanCity is a diamond in the rough. The menus and presentation of the game leave a lot to be desired, but the actual game, the act of balancing hospitals atop skyscrapers without accidentally sending your whole city into the ocean, is about as compelling as city-building gets.

It’s no SimCity (2013), but no one seems to have told BalanCity that. Hence it tasks you with the typical challenges of a city-builder. You have to keep your approval rating high or people will protest in the streets of your unbalanced city. And you’ll need to keep your emergency services working to put out the fires, rescue people that’ve fallen out of your leaning towers, and repel the definitely-not-Godzilla as it attacks your city.

It is perfectly okay to release a panicked shriek

Building a city on a pivot is hard enough without the range of disasters that can befall you. Example: It might turn out that you need to bulldoze your city blocks because you’ve built them incorrectly, or because they’ve toppled over. Doing so might then upset the weight distribution and topple everything into the sea. It is perfectly okay to release a panicked shriek in these moments.


You get what you see with BalanCity. Despite the selection of missions and variety of different buildings on offer, once you’ve got the gist, it doesn’t change up too much. You’ll get hit with earthquakes, a meteor strike, or even attacking aliens as you progress, but you’re always trying to stack skyscrapers without everything falling into the ocean—never anything else.

That said, when all the systems move in place, it can be magical for a few seconds; you’re trying to right the wavering city, while a police helicopter speeds off to quell a protest by hosing the entire area with pepper spray. It feels like chaos balanced between your fingers. Then it all falls over.

BalanCity is on Steam. You can buy it right now. Find out more on its website.