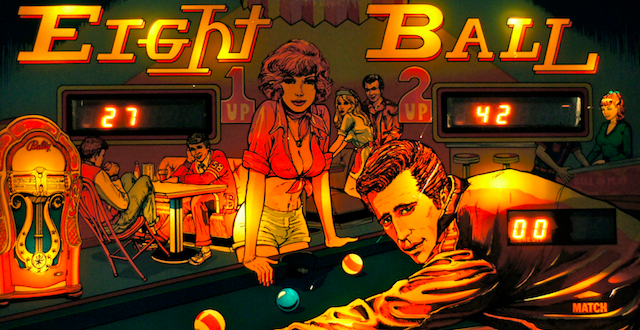 Toronto’s last standalone arcade was a nameless corner in the basement of Union Station. It had a solid wall of various pinball tables, a few shooters, a broken change machine, and one to two paper-bag-drinking strangers at any time. When the arcade vanished unceremoniously, around a year ago, so did a dependable, if dirty, arcadium. At one time being littered with them, the city no longer offers zoning permits for arcades.

Approaching 40, Torontonian Jason Hazzard and his wife, Rachel, sought a new venture in The Pinball Café on Queen Street’s west end. Though new, the café is already the talk of the town and appearing on nearly every local television program. It’s not a massive spot, even compared to surrounding convenience stores. There are nine machines rumbling and dinging along two walls, parallel to a chalkboard with the scores for serious players to beat. Currently, most of the machines are Stern releases from the past decade; AC/DC, NBA, and Ripley’s Believe it Or Not, cut with a few classics; Comet, Xenon, Mata Hari, Black Hole, and The Addams Family. Hazzard has customized the Addams machine with fresh LED lights and a tiny plastic alien sitting in the electric chair above the center scoop. The new lights glowing underneath the bumpers make the balls shimmer as they zips across.

Before opening the café, Hazzard ran a moving company. Though successful, it made him miserable. The stress of moving often made him and his movers the target of client frustrations. With the big four-oh on its way, Hazzard wanted an out. “I’m not going to live in this prison that I’ve created for myself,” he remembers telling his wife.

One client, exhausted from the move, had left Hazzard with a pinball machine in his office. It was Bally’s 1979 table Supersonic, a vintage set themed on nothing but riding an airplane. It didn’t take long for Hazzard to notice where his employees spent their off hours.

The most suspicious-looking fellow is a regular who resembles Edward Furlong in Terminator 2: Judgment Day, and he seems to be tagging along with his dad.

“These were young guys. They didn’t grow up with pinball and yet they were obsessed,” Hazzard says. His staff began challenging their friends after hours, and according to Hazzard the fight for the leaderboard became a “violent” and aggressive battle. Soon Hazzard picked up a second vintage table, Mata Hari. The inspiration to open an uncanny café became organic at that point. There was just one problem, one that’s haunted the machines since their invention.

Long ago, arcades were seething, darkened halls of youthful no-goodness. They gave parents second thoughts. They were meeting points for drug dealers and recent users. Hazzard’s establishment is usually filled with young parents, hip folk, and even the Toronto Ontario Pinball League (TOPL), but these distinctions don’t change written bylaws.

Dormant since the ’80s, Toronto zoning bylaw No. 438-86 basically dictates that a restaurant can only house two coin-operated games, whereas an arcade is allowed 20. It has put Hazzard in an odd position, given that the city also no longer offers arcade permits. “That’s just an archaic law that never got dealt with,” says Mike Clinton, the president of TOPL. “Back then, pinball was considered illegal. It’s still probably illegal according to the law.”

Gord Perks, Queen West’s councillor, worked with Hazzard on a minor variance—a workaround that is much less expensive than a total rezoning. For Hazzard, it’s a bizarre nuisance. For Toronto residents, it’s strange gossip. Perks does believe arcades used to be a problem, and that many attract unwanted characters, like that nameless corner in the basement of Union Station.

But on a Saturday afternoon, the fully lit Pinball Café has children clamoring to try out older machines like Comet and The Addams Family over present-tense franchises like Iron Man and Transformers. The most suspicious-looking fellow is a regular who resembles Edward Furlong in Terminator 2: Judgment Day, and he seems to be tagging along with his dad. Even on the days of the week when the café remains open until midnight, the Pinball Café attracts more pinball junkies than junkies.

A few blocks up from Queen West and The Pinball Café, a small bar, Unloveable, installed a Star Wars pinball machine for free play. Across town, a store named A&C Games opened a variation of an arcade in its basement, previously a karate dojo. Neither A&C nor Jason’s venture is strictly for the kiddies, but they illustrate a radical shift in tone from what urban arcades used to be, and the new kinds of spaces where people are willing to toss out quarters.

Hazzard’s space isn’t loud, damp, and full of expired M&M machines and cigarette stank. It isn’t where anyone will steal your backpack while you play Dance Dance Revolution. Some may call Hazzard’s café or other new boutique experiences the gentrified arcade, but it is certainly cleaner, hipper, safer, and sharper than the dens that required civic regulation. It’s a place where parents introduce a new pastime to their kids, instead of a place their kids sneak off to during class. If you miss crowded places to solicit between Area 51 sessions, then you’ve lost a tactile gaming experience to the console. Pinball fans have known that feeling for years.