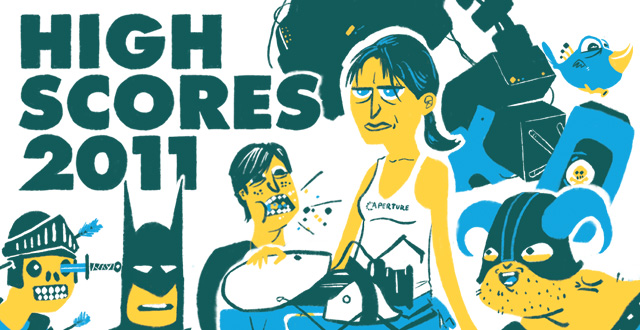 2011 was the year I started to regret not having a touchscreen device. There were many iOS and Android titles (such as Superbrothers: Sword and Sworcery EP) I would have loved to play. Of the games utilizing the older technologies, Dark Souls turned everything else into an also-ran. Dark Souls is so good that it made me unable to play other action games – other control systems just seem designed to have a deleterious effect on my Dark Souls parry timings. Between Dark Souls and a thesis I didn’t have much time for experiencing the full riches of the closing months of 2011. In fact the parallels between Dark Souls and writing are… something I don’t really want to think about too hard. Anyway, games like TES 4: Skyrim and Batman: Arkham City would probably be on the list but I haven’t played them yet.

Gilliam-esque visual styles with historical themes also seemed to play well in 2011. The Cat and the Coup’s elegant mixture of documentary and ludic elements warrants a playthrough despite its brevity. In the context of contemporary events the game’s timeliness can’t be doubted. A whole new kind of history lesson. More like this, please! Rock of Ages (or, as I call it, ‘Katamari Arthistory’) frees Sisyphus, antiquity’s greatest con artist, from damnation so that he can roll on through centuries of European imagery and music all the way to Goya.

Surely the sequel will deal with modernism (Sisyphus, meet Camus) – although it would need to be updated. Rocket of Ages! Imagine careening through a Johns inspired American flag track in order to squash a helium-voiced, two-dimensional John F. Kennedy. The final boss could be Banksy. It would be great.

Along the ‘messing with history’ vibe, Atom Zombie Smasher performs a weirdly wonderful mashup of anti-Communist strongman propaganda and zombie apocalypse by way of Pinochet’s mythical Plan Z. The creeping horror underlying the game’s comic stylings is the way it takes us out of the small-scale survivalism of the zombie genre to re-deploy the tropes at the level of management of populations and states of permanent emergency. Perhaps Pinochet actually thought like this.

Trauma goes the opposite direction, zooming in to one woman’s personal history and the shattering effects of an accident. The gestural interface brings to mind the experience of trying to reconnect with one’s own body and past, piecing things back together in light of an event the nature, scope and contours of which resist apprehension.

Of the big-budget action-RPGs only The Witcher 2 had an aesthetic clarity that truly shone through its flaws, but I enjoyed Dragon Age 2 and Deus Ex: Human Revolution almost in spite of themselves. DA2 disappointed many but it spurred interesting debates by gamely tackling thorny issues of politics, race and sexuality. It was all a bit undermined for me because by the end I was leading a party of mass murderers. Bioware’s use of horror elements has never been their forte but this time they succeeded in spite of themselves. The sight of my gore-stained character hectoring people about being mean to elves still gives me nightmares because can’t shake the suspicion that this ghoulish vignette is obscurely emblematic of our entire age. Anybody who engages in so much wholesale slaughter seems unqualified as a calibrator of moral compasses. I believe the cool kids have laboriously dubbed this ‘ludonarrative dissonance’.

DE:HR was a bit better on this score. Although plotting and characterisation were again pretty ham-fisted (and the symbolic repetition of Rembrandt’s “Anatomy Lesson” was about as subtle as… as DA2), sneaking about was a lot of fun and it was possible to avoid lethal force in most situations. Plus I discovered that DE:HR was a vision of a dark, grim, gritty dystopia in which nobody notices if you stack large numbers of photocopiers and dumpsters in their paramilitary compound or police station. The photocopier fort is largely unexplored in espionage fiction and added a spritz of Minecraft to the proceedings (oh yeah I have to mention Minecraft); through such re-zoning of space I could do the marginally fun hacking minigame while guards wandered by oblivious. Say no to realism! Realism would fain see my photocopier forts taken from me.

From all this it certainly seems that my preference in 2011 was for the zany and experimental rather than po-faced, heroic worldbuilding efforts – if only because the latter end up being absurd (which is not at all to say ‘not fun’) anyway. Maybe it’s just a phase. The only way to really be sure, I suppose, would be to try Skyrim. But for that I would have to get over the pan-ludic dissonance that Dark Souls’ damn parry timings have inflicted on me.