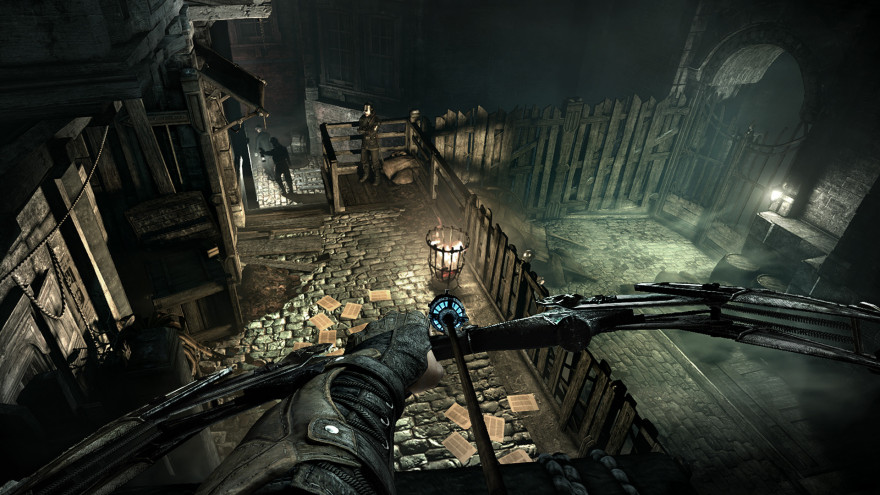 I’m no stranger to the shadows.

The twilight of my PC gaming years found me infiltrating Hammerite temples and pickpocketing nobles in the decrepit streets of The City. Under the guise of the gruff Garrett, I was invincible. Those who would have my head shouted gratuitous slurs at my retreating hood, but I wore “taffer” as a badge of honor. With moss underfoot to dampen my step, I melted into the darkness, slipping in and out of the upper class’s dwellings with treasure beyond reason.

There was no fanfare, no objectives, and no glamour. It was a dirty, thankless job, but it felt so right to extinguish flames with a well-placed water arrow. Plucking priceless physical possessions out from beneath their owners’ noses was exhilarating. I wanted more. Luckily, the Thief franchise delivered and expanded, before dying out and giving rise to a brand of stealth games I would later come to appreciate, but never know as intimately as Garrett’s plight.

When Thief resurfaced years later as a completely different beast, I was enamored with the idea of going back, but I knew there would be a cost. For smooth sailing in a world of modern stealth mechanics and widely accepted gameplay changes that wouldn’t have flown back in 1998, changes had to have been made. I knew they were coming, and I knew I’d need to embrace them. And yet, looking at this reboot objectively, there’s little I can appreciate and so much I find myself abiding that it feels like a total loss.

With moss underfoot to dampen my step, I melted into the darkness

The modern reboot of Thief is once again placed in a world rife with the brand of dark, Victorian steampunk con-goers and cosplayers flock to these days, where the moon always casts a pale shadow over those unfortunate enough to have to dwell within. Garrett, conveniently recast and reshaped as a cocky, smart-mouthed master thief with a female companion (complete with a new voice actor) returns to The City once more to find the tyrannical Baron in charge and a mysterious plague killing off townsfolk.

Garrett is charged with investigating The City and what’s been happening to his home during the time he’s spent away. And when grating new companion Erin supposedly ends up dead, there are secrets to unravel when it comes to the mysterious circumstances surrounding her disappearance. But there are still items you must pilfer along the way. Of course. Why not? You saw the title on the box. This is what you do.

You’re only reminded of this every other breath as Garrett consorts with his companion and makes the errant remark here and there as you explore The City. It’s as if the art of subtlety was completely lost on this iteration of Thief, which is instead content to revel in the dirty deeds it requires you to perform. Lasciviously, it hovers over you with objectives, checkpoints, and “tools” with which you can become a better thief. You’ve got an entire arsenal of tools at your fingertips with which you can subdue any obstacle in your way, whether it’s an errant guard that simply won’t look away at the right time, Focus powers and treasure highlighting that ensure you know where you can come away with the best loot, or the windows acting as obvious markers for the next area to explore.

There’s no immediacy to this brave new world. It’s brazen, content to wallow in its own filth, borrowing heavily from the games that borrowed from the king of stealth in the first place. Dishonored comes to mind—how appropriate that a modernistic Thief would have to turn around and borrow from one of the games that obviously took the original and used it as a sort of blank canvas to build on?

The bizarre addition of a female character who’s killed off in the wee hours of the game seemed like an intriguing point at first but only served to draw lines around the game’s greater issues. Why should he care about her? He’s looking out for number one—no point in giving players any real reason to invest themselves, right?

Except that it’s just that core that has been ripped from the original game’s chest. Garrett’s plight and interaction with the olden days of The City gave an ephemeral feel to every jaunt into the darkness. What would getting caught or killed entail? What were the Hammerites up to? What was the great evil befalling the city? There is none of this left; the shadows in Thief hide not great, unspeakable mysteries but only more immaculately rendered cobblestones. Perhaps it’s time for Garrett to steal this new vision of Thief a personality.