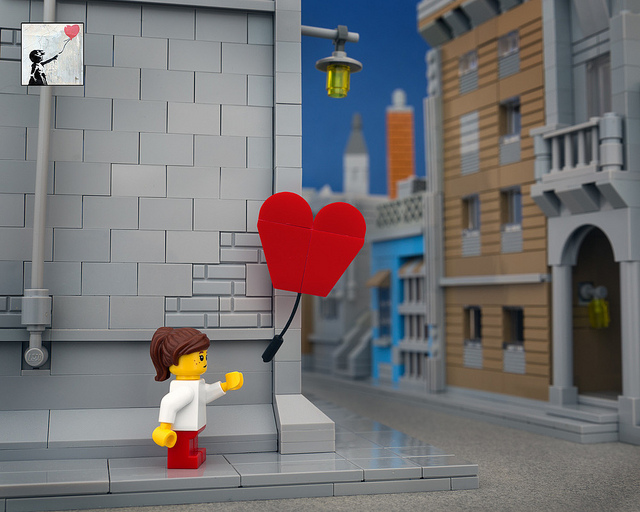 Maybe photographer Jeff Friesen is Banksy. I don’t have any real reason to believe that this is the case, but all Banksy-adjacent content should include some unfounded speculation about the mysterious artist’s true identity, so that’s my duty dispensed with.

Here’s something I know for a fact about Friesen: He has put together a book entitled Bricksy: Unauthorized Underground Brick Street Art. The $15 tome features 84 Lego scenes, each of which is based on one of Banksy’s works. Friesen has some priors in this regard. The Canadian photographer’s last book, United States of LEGO®: A Brick Tour of America, recast classic American tropes and scenes using the famous Danish children’s toys. And really the leap from making an Americana diorama to a Banksy street isn’t that large; both are works of satire though the extent to which they are self-aware is definitely up for debate.

Maybe Bricksy is the perfect distillation of Banksy’s oeuvre.

At least Friesen seems to be in on the joke. Although LEGO is a flexible medium, it does tend to subsume all source material to its aesthetic. Consequently, Friesen’s dioramas, which already took a fair amount of creative license in reimagining Banksy’s work, all look like a mildly subversive LEGO village. One might ask whether this makes Banksy’s work edgier or more milquetoast: I leave that question to you, dear reader.

Maybe Bricksy is the perfect distillation of Banksy’s oeuvre. (Shit, did I just call it that?) Whereas the maximalist Dismaland sought to get at the themes and convoluted commercialism of Banksy’s work through little more than sprawl, Friesen’s tableaus suggest that the artist’s body of work is fundamentally compact. Little images of Banksy’s works dot the top corner of each page like a stamp. The size seems apt. If you reduced Banksy’s work any more, you’d just have a wad of cash.