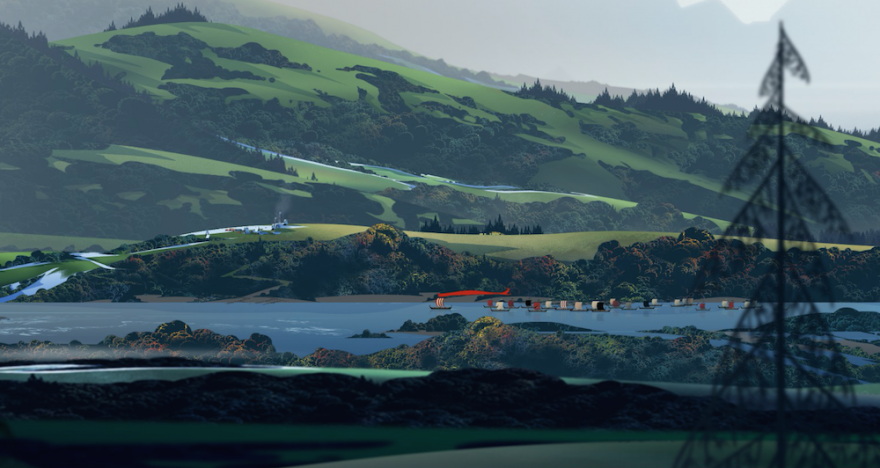 The world is breaking. This is what you’re told at the outset of The Banner Saga 2. It’s delivered in a sigh, an exhale, and carries with it the weight of responsibility you bear—not all of those entrusted to your care will make it through the ordeal. There’s an inevitable doom to the proceedings but your choices will give those that follow you a chance, at least. Those choices are there in the dialogue, in the small esoteric details of conversation, in the events that unfold, and in the combat that ensues. Decision-making is woven into the tapestry of play and it finds meaning in the story that unfurls before you.

Stoic, the studio behind The Banner Saga series, has made an odd choice in genre for laying out such a complex and fluid world, and one susceptible to change. These are tactical RPGs, a genre famed for its stringent compartmentalization rather than emotional resonance. Yet, in spite of the potential limitations that framework might present, The Banner Saga series goes beyond the seemingly unavoidable artifice of the genre to deliver an experience in which you feel for the characters. These characters grow, and when they die, you genuinely care for the loss of their personality.

Decision-making is woven into the tapestry of play

The first entry in The Banner Saga series did slog extremely well. Resources would dwindle as your party trudged through the thick snow, a ticking timer to starvation. And morale would slip not only when you lost fighters and clansmen, but also as your decisions adversely affected the plight of those who were now dependent on you. Depression was built into a system that rarely gave you an opportunity to rectify the situation.

That first game’s battles, too, were a nightmare. The turn-based nature of combat stretched time, dragging out the skirmishes. You’d chip away incrementally at the armor of your enemy, laboring to maneuver your characters about the grid. But there was a crushing inevitability to a blow wrought by the Dredge, that moment of impact given more meaning by the slowness of everything else occurring around you. This combat was routinely criticized for its repetitive nature but, to me at least, it was a beautifully if heftily-designed creation. It felt arduous, you felt tired playing it, and it compounded the feelings that were wrought from the game in its narrative stretches. Life is shitty for these people and you will get, at the very least, some sense of it.

Tom Bissell, in his book Extra Lives: Why Videogames Matter (2010), spoke about challenge being antithetical to narrative, a barrier to both the progression of story and emotional investment. In the case of that first game, though, he’s wrong. Through its combat, The Banner Saga (2014) gave you, however small, some insight into the situation—it managed to convey something of your party’s plight. But, in The Banner Saga 2, narrative is better integrated into the combat. Characters will appear, Dredge will lurch from the darkness, dialogue will play out, and the environment will shift opening up new, previously inaccessible areas. It makes for a more streamlined experience, one that turns out to be more engaging, but there was a graceful monotony to combat in the first game, a feeling that is lost this time round. It shouldn’t, in essence, be this enjoyable—it should aim to be more harrowing—and it’s this that detracts, ironically, from the narrative that is unfolding.

That isn’t to say that The Banner Saga 2 is a bad game. It’s not. At all. In fact, it develops many of the themes of the first game that elevated it above the usual fare of fantasy role-playing titles. Central to this is the idea of displacement. In this game, you play as either Rook or his daughter, Alette. Their village was wiped out by a party of Dredge—they have no home. Over the course of the game you travel to many destinations in search of refuge. Some are welcoming and some are hostile. But it’s never easy to attain hospitality—negotiation is always key. Throughout this journey you encounter many more displaced peoples whose homes have been ravaged by war. Smoldering settlements loom in the background, a common feature of the landscape, and often you are given the decision to help these people—to invite them into your party of refugees—or to leave them to fend for themselves in an openly hostile environment, at the mercy of a seemingly ravenous foe.

Decision-making in the game is hard. Partly, this is down to Stoic’s mostly excellent writing; not only the depth of characterization, but the relationships between those characters. Near the beginning of the game, Iver attempts to comfort Alette, the newly appointed leader, with stories of her recently deceased father and long-deceased mother. “She made him smile; he made her laugh,” he says, in one of the game’s warmest exchanges. And as a woman of power in a deeply masculine world, Alette is subject to frequent challenges to her authority, but Stoic handles these encounters carefully and, on the whole, successfully. “What does she really know about getting us to Arberrang safely?” says one critic. “She should be looking for a husband, not telling me what to do.” Alette’s response is combative, asserting her power, while Oddleif, her friend and mentor, offers a smile in support. And like in the Kentucky Route Zero games, unchosen dialogue options are not necessarily wasted—they still give insight into the thought processes and psychology of the characters you are controlling. You may, in the climactic moments, wince through a decision as the relationships are stretched and tested.

The other big factor is that Stoic is extremely good at obscuring the potential outcome of your decision. There is no right or wrong, no good or bad. Decision-making is a fuzzy, imperfect affair, and you’re edging your way through this world as much as Alette is. You share her uncertainties. Near the beginning of the game, you come across a bank of driftwood on the river, obstructing your boats. I was impulsive—I chose to break through the barrier, figuring it better to do that than risk any time on land where my party was vulnerable. The hull of one of my boats cracked and we were forced to move to land anyway. Dredge descended and, after a long fight, we made it out alive. But not without losing men, women, supplies, and morale. Moments like this underscore the fate of your party and reinforce the irrefutable hopelessness of it all. There’s no respite and it grinds you down. You feel beaten throughout almost the whole of the game. But it’s a welcome change in tone from the power fantasies that typify the current videogame landscape.

There are occasional moments of relief, though. Generally, these come when you encounter the statues of fallen gods. As monuments of the past, they offer time for reflection, for stories to be passed around, and for laughter to take hold. Importantly, it’s a shared cultural artifact to bring your disparate party together in a world where day-to-day bonds are being broken. It’s moments like this that emphasize what’s been lost. Come morning, it’ll be back to the road.

Duality lies at the heart of The Banner Saga series. There’s the spreadsheet artifice of combat and character progression, and there’s the world that the art and story muster. The combat, this time round, might feel as if it’s pulling in a different direction to the story—unable to reinforce the narrative in the same way as the first game—but it doesn’t stop the game effectively exploring its story of displacement and asylum. It’s the decisions that bind the experience; enabling The Banner Saga 2 to transcend its videogame construct. You’re left with an experience that feels not only alive, but alive with the complexities of the real world.