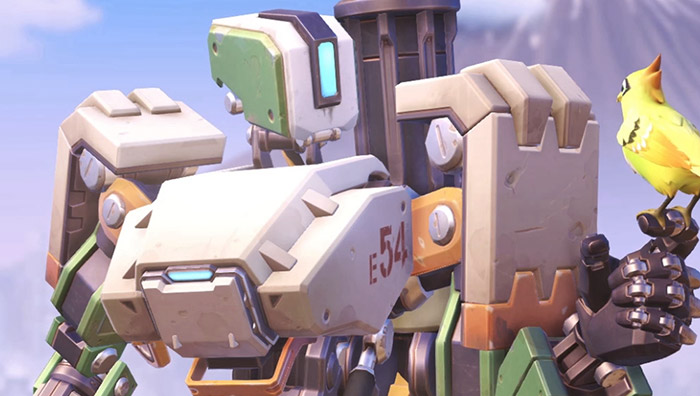 I’m not very good at shooters. My aim is poor and my reaction time is molasses. I’m also terribly impatient. So when I turn on Overwatch, more than one layer of my grey matter shuts down entirely. My attention span is reduced to that of a fish, twitching left, nudging right, running, jumping, and shooting as if the map were a bundle of muscle fibers and I was an unwanted electrical signal spasming through it.

This is why Bastion always kills me. Not just once, or twice, but repeatedly. The first time I run around a corner into an open arena, I can usually guess he’s going to kill me. The second time I insist I’ll be quicker, trying to draw and aim first against a sentient machine gun who already knows I’m coming. And I’ll keep coming, breaking against the lethal AI wave after wave, as sniper, rocketeer, and eventually tank. I’ll march right up to Bastion and shred him at point-blank or I won’t do it at all.

In this way, Bastion provides a crucible for determination not unlike the water gun race at a carnival. All you can do is aim water into a hole for 30 seconds and hope for the best. None of the other games at amusement parks or county fairs ever got under my skin in the same way. For some reason, the futility of throwing darts at deflated balloons, or trying to toss ping-pong balls into milk bottles, seemed obvious enough.

But the water gun felt completely within my control. If I was good enough, if I focused hard enough, the oversized gorilla holding a banana would be mine. I would see the bullseye in my mind before I went to sleep. The next day I would aim better. Pull the trigger harder. And, surely, my horse would tick across the finish line first.

Decades later, I’m waiting to respawn back on the Temple of Anubis. This next time through the first choke point will go different. I’ll aim better. Left-click harder. And Bastion will die. It’s in these moments, when I’m playing Overwatch in the most wrong way possible, that I feel like anything’s possible, like I’m searching for an invisible crack in the game’s code, an instant in which the game’s rules stop applying to me, and the sheer weight of my desire to kill that fucking robot will lead me to a breakthrough.

But if insanity is doing the same thing over and over again, and expecting different results each time, Bastion is also my lobotomy. Playing as the SST Laboratories Siege Automaton E54 is like being the man behind the counter at a carnival, running the table on wide-eyed children and their parents, who are too tired to put up resistance. It’s deeply cathartic to slaughter other Overwatch players as they try to dash down exposed hallways or sneak out of cover after you’ve wasted so many respawns trying to do the same.

Especially because with Bastion the mantra of “aim better, click harder” actually does produce results. The walking, talking minigun is supposed to force players to think more creatively, to adapt by learning maps better and switching characters more often. No matter how good you think you are, some situations are simply unwinnable, so go back to the drawing board try again with a different set of tools. The fact that Play of the Game wrap-ups are still littered with Bastion montages shows human nature might be more complicated than that.

The gatling gun, on whose design Bastion is modeled, was invented by, and named after, Richard Jordan Gatling. Part of a truly terrifying development in the state of warcraft, the weapon could cut down human beings with speed and ease.

It was Gatling’s hope, however, that the gun would actually save human life. “It occurred to me that if I could invent a machine—a gun—which could by its rapidity of fire, enable one man to do as much battle duty as a hundred,” he wrote, “that it would, to a large extent supersede the necessity of large armies, and consequently, exposure to battle and disease [would] be greatly diminished.” The enigmatic logic governing the human mind proved too unwieldy for his designs as well.

Hanzo – Hanzo “looks like a good man,” my Japanese mom raves
Junkrat – I have fallen in love with Junkrat
Mei – Here comes Mei, the badass nerd hell-bent on revenge
Torbjörn – An ode to hard-working, salt-of-the-earth Torbjörn
Widowmaker – Widowmaker made a widow of me