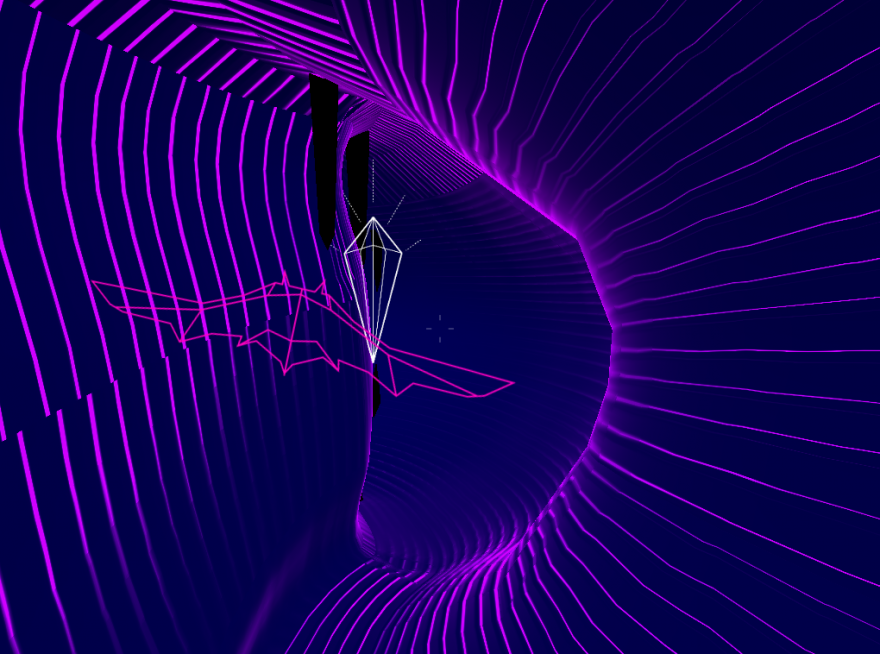 Tron (1982) is a dope science-fiction film. Maybe it’s the dopest sci-fi film. And maybe it would be even doper if it starred a bat, instead of a digitized Jeff Bridges on a lightcycle. In the game Winging It that exact fantasy is realized.

After booting up Winging It, my screen turned dark—which is an unusual. There’s no menu and no instructions. Instinctively, I clicked, and a sound shot out to reveal my surroundings. A wave of sound that revealed on-screen that I am a bat. But not a photo-realistic bat, or even a cartoon bat. Instead, I’m a bat that, yes, looks like it’s straight out of the Grid from Tron. I’m a wireframed bat, in a neon-lit, barren cave. The click of my mouse serves as my echolocation, and is my vision to exploring the abyss.

Constant echolocation is necessary for success

Winging It was born out of the Toronto Game Jam 11: Don’t Stop bEleven (the theme: “There Will Be Consequences”) as a collaborative effort between veteran game developer and animator Sagan Yee, artist Ksenia Eic (apparently her first game-making project, as it turns out), and composer Jake Butineau. Yee’s the most seasoned of the bunch, and handled the Unity-bound programming for the game, as Eic conceived the art and modeling, and Butineau orchestrated the music and sound.

The goal of Winging It imminently is to reach the “Cave of the Toronto Game Jam Goat,” using your bat’s echolocation to light the way and knock down any obstructions in your path. The cave itself seems endless. Constant echolocation is necessary for success, because if you don’t use it, you may just lose your way and fall into perpetual darkness.

Soar through the caves of this Toronto Game Jam 11 submission on Mac and PC, available for free on itch.io.