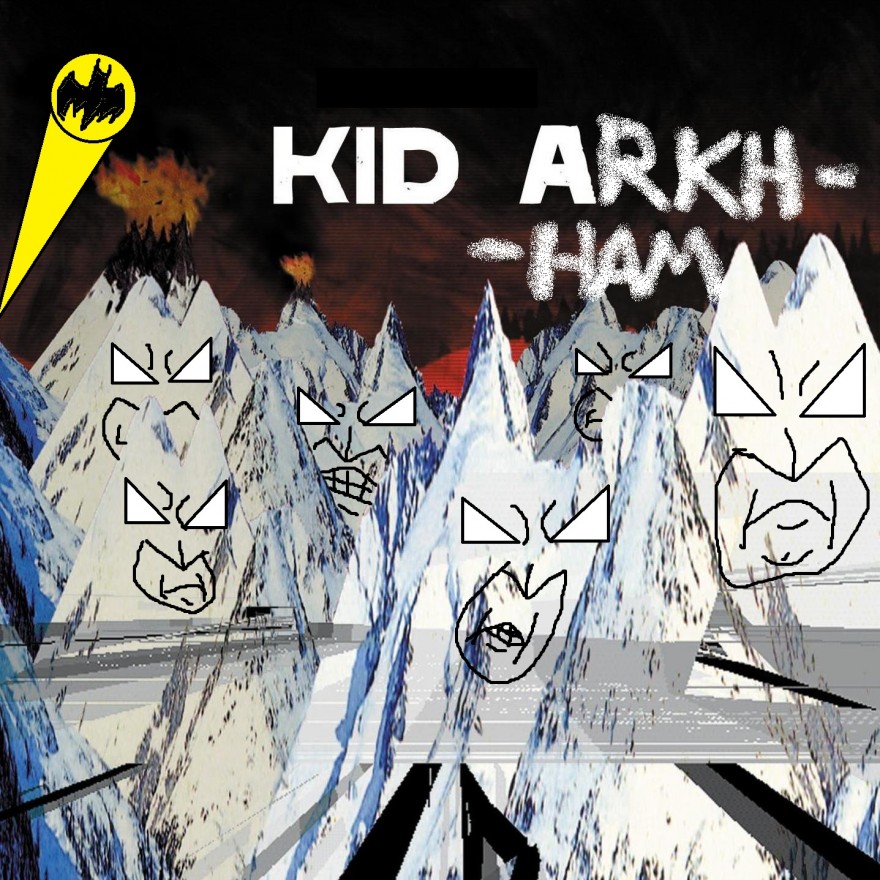 I had never even seen a flying car before. 25 years of rotations, passes through comets’ paths, and travel, and to my memory I had never witnessed a car scratch across the night sky. Enemies were hunched over their wounded comrades. Batman slowly beat on a thug, growling, eyes closed, straining at his cowl like he was trying to fart out of his mouth. Robin beat diligently on a pair of lesser goons, waiting for his cue. White pearls of lamp light swam over their faces. A lazy police light spilled artificial constellations inside the aluminum cove of the makeshift stage. The metal skeleton of the stage at one end of Flugelheim Museum, on the steps of Gotham City Hall. The Joker’s bones laid beneath. I stared entranced, soaking in Arkham’s fivefold increase in size, chiseling each gameplay moment into the best functioning parts of my brain which would be the exclusive console home of the material for months.

The butterscotch lamps along the walls of Arkham bled upward into the cobalt sky, which seemed as strikingly artificial and perfect as a cryogenic suit. The staccato patter of thugs ascended repeatedly. “I’m the hero Gotham deserves,” Batman rasped like his dying words, “but not the one it needs right now.” The trained critical part of me marked the similarity to the past three Batman games. The human part of me wept in awe.

a game which completely obliterates how videogames will be considered

The Gothamites surrounding me held their breath in communion (save for the drunken few shouting “It’s him!”). Suddenly, a rise of whistles and orgasmic cries swept unfittingly through the crowd. The death of the Joker was certainly momentous, but wasn’t the response more apt for, well, Bane? I looked up. I thought it was fireworks. A flaming Bat Signal tore open the clouds and disappeared behind the church where the syrupy Gotham River crawled. Batman had the heavens on his side.

For further testament, Jamin Warren and I both suffered accidents in the same week, in different parts of the country, while playing Arkham Origins: Blackgate on our respective 3DSes. For months, I feared going back to that game, just as I’d feared passing 18-wheelers after nearly being crushed by one in 1990. With good reason, I suspect Rocksteady to possess incomprehensible powers. The evidence is only compounded with Arkham Knight— the rubber match in the studio’s legacy– a game which completely obliterates how videogames, and Rocksteady themselves, will be considered.

Even the heralded Arkham City has been nudged down one spot in Valhalla. Arkham Knight makes open-world videogames childish. Considerations on its merits as “action” (i.e. its controls, its gadgets, and its combo system) are pointless. Comparing this to other games is like comparing an aquarium to blue construction paper. And not because it’s a walking simulator or a point-and-click adventure or a JRPG or a bullet-hell shooter. Classifications don’t come to mind once deep inside this expansive, hypnotic open world. Ransom, the philologist hero of C.S. Lewis’ Out of the Silent Planet who is kidnapped and taken to another planet, initially finds his scholarship useless in his new surroundings, and just tries to survive the beautiful new world.

This is an emotional, psychological experience. Arkham Knight feels like a caped hero trying to overcome a childhood trauma. It’s the story of a lost orphan, and his sidekicks, losing faith in themselves, destroying themselves, and subsequently rebuilding a perfect videogame. In other words, Batman hated being Batman, but ended up with the most ideal, natural Batman simulation yet.

The Batmobile’s engine fires up like Close Encounters spaceships communicating with pipe organs. As your eyes decide whether the framerate is amazing or perfect, Scarecrow’s Cuisinarted voice struggles for its tongue. “Scarecrow,” Batman belts between uplifting thugs. The first-person mantra of “There are two dead parents in my head” is repeated until the line between Wayne’s mind and the player’s mind is erased. I would hate to spoil any of your first playthough.

The experience and emotions tied to playing Batman: Arkham Knight are like witnessing the cremation of the Joker’s corpse while simultaneously having the opportunity to see him cackle in the afterlife on Imax. It’s a game of epic paradox. It’s beautifully-rendered yet subtle, puzzling yet satisfying, crunchy yet immersive, feature-packed yet meaningful, content-rich yet organic, photorealistic yet dreamlike, infinite yet twenty-something hours. It will cleanse your brain of those little crustaceans of worries and inferior gameplay clinging inside the fold of your gray matter. The gameplay hits from unseen angles and controls with inhuman fidelity. When the hands peel off the controller, and it occurs that a team of men (Sefton Hill included) created this, it’s clear that Rocksteady must be the greatest studio alive, if not the best since you know who. Breathing people made this game! And you can’t wait to dive back in and try to prove that wrong over and over.

Note: This is not an actual review. We’ll publish a proper review at a later date.