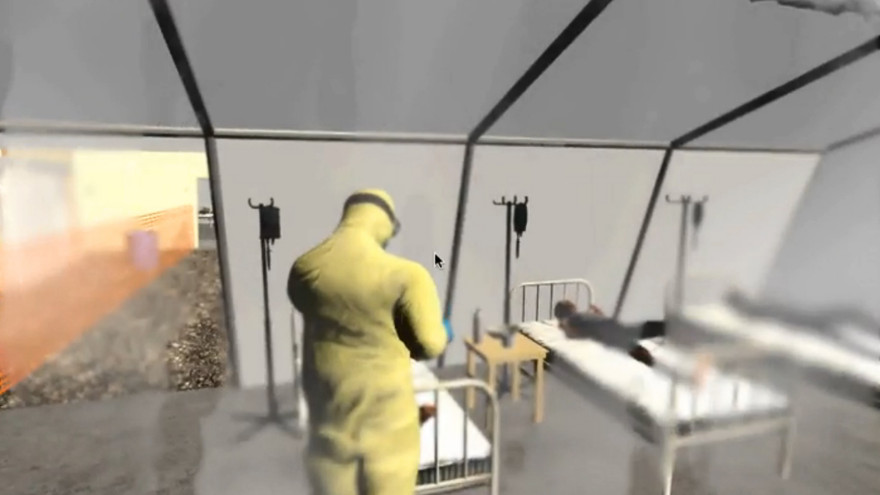 Seattle-based med-tech startup Shift Labs held a hackathon last month where a mix of 40 game designers and clinicians collaborated on a simulation that replicates an ebola treatment center in Liberia. The WHO-endorsed simulation could be used to prepare health workers for the rigorous procedural stressors they would face in West Africa, where every action has to be appropriately measured to avoid infection, right down to removing a hazard suit’s gloves (Of which there are two layered sets that both need to be cleaned and purified in chlorine.)

The simulation is less geared toward mental and emotional preparedness, which it could never achieve, than technical preparedness, which it very well could achieve. As players walk through a roughly-textured triage ward, they are warned of various health code violations that could result in transmission of the virus. The extent of the cautionary measures that these medical professionals must operate under is unthinkable. Something as simple as sitting on the edge of a previously-occupied bed is a cause for alarm, as viral particles on a mattress can be carried on a protective suit’s plastic and infect the wearer upon removal.

Perhaps the most affecting part of the simulation is the almost palpable steam that fills up the screen, something doctors who don’t work in 90 degree heat and 90 percent humidity in awkward and restrictive protective gear might not be used to.

This interview with the CEO of Shift Labs, Beth Kolko, highlights what was acheived at the hackathon and shows prototype Unity engine footage at the two minute mark.

So many of our interactions with the world are unthinking: Blinking, breathing, sitting, touching. If there’s sweater fuzz in your friend’s hair you pick it off like your simian forebears. If a loved one loses their job you offer your condolence with a warm hug. When it’s time to exchange some bodily fluids with your significant other you do so eagerly and passionately in throe, a state we prize as instinctual and of-the-moment. So often thought is secondary; we just do. An outbreak of a highly-infectious disease like ebola changes all of this. Thought must come first. Precaution must outweigh affection. You have to leave that fuzz in your friend’s hair.