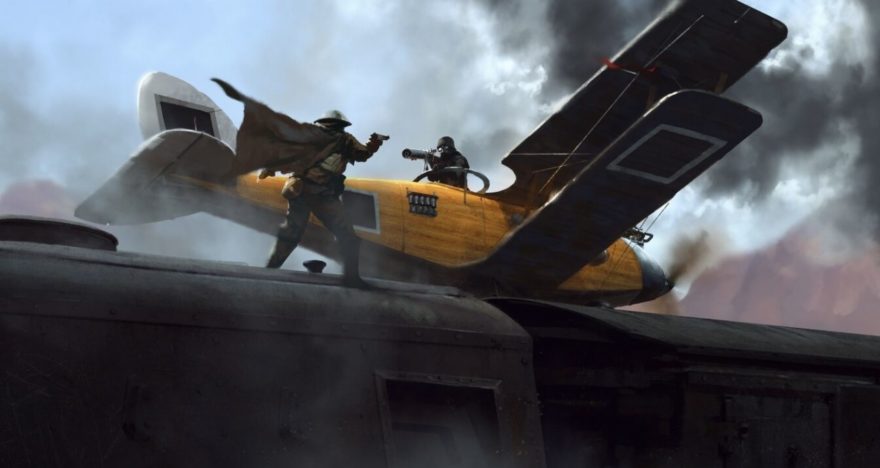 The title might say it all: Battlefield 1’s choice of numeral suggests a process of looking backward, of turning to the past to find a way forward. In its appearance at the EA Play event yesterday, Battlefield 1 demonstrated this in what was a comprehensive display of force: British Mark IV tanks churned through French mud like supercharged rally cars, soldiers bayoneted their foes after Olympian sprints across the battlefield, and zeppelin after zeppelin tumbled to the ground in a simulacra of the Hindenburg’s fiery descent.

Yet the commentary was not the panicked voice of Herbert Morrison, his cry of “Oh the humanity!” echoing through the years, but the rapid-fire patter of commentators Golden Boy and Westie. But this is as it should be, there is no humanity lost here, no death. These soldiers return to their feet as soon as they have fallen, run through bullets, throw themselves to prone position with the abandon of a Hollywood stunt man. As we watch a magic syringe revive a fallen teammate, a parachute effectively deployed seconds before impact and grenades ping about like tennis balls, it becomes increasingly clear that this is a Battlefield game before anything else. World War I is little more than a patina, a thin layer of mud and mustard gas draped over the same whirring machinery.

World War I reimagined as a frictionless machine

So why the consternation, the hand-wringing? Since the recent announcement of Battlefield 1 there has been a rumbling murmur of worry, suggesting that the setting is distasteful, disrespectful, or historically inaccurate. Even the boss of EA game studios, Patrick Soderlund has said that “When the team presented the idea to me of World War 1, I absolutely rejected it.” Though Sonderland was eventually convinced by the team at DICE, his mention of this seems intended to give him some critical distance, so he might remain safe if critical opinion turns sour. Of course, there is a hypocrisy on display here, not just from Soderlund, but in the general accusations of disrespect or disgust. After all, DICE has been depicting war as “fun” for over a decade now, running through both historical settings in Battlefield: 1942 (2002) and Battlefield: Vietnam (2004), as well as the contemporary fictional wars of Battlefield 2 (2005), Battlefield 3 (2011), and Battlefield 4 (2014).

The lack of similar distaste being expressed around Battlefield 4 in particular is telling of both our comfort with depictions of contemporary conflict and our lack of moral compunctions regarding fictional warfare. Of course, Battlefield 1 is no less fictional than Battlefield 4, and watching five minutes of game footage will more than prove that. This is World War I reimagined as a frictionless machine, an endless breakneck charge. The question of historical accuracy seems comical when the game fails to depict reality in any sense. This is something that has become invisible to those of us who play games (and war games) on a daily basis, used as we are to the selective “realism” they choose to depict, but to anyone else this roar of sound and fury is as real as Tom and Jerry (albeit with a photorealistic sheen).

So why is it that the unpleasant feeling remains, the knot in the pit of our stomach that unexpectedly appears at a violent bayoneting? Perhaps it is because we have been well trained in the gravity of old wars. Both through our education systems and the rituals of our Western societies we have been imbued with an unevenly weighted respect for the “Great” wars of our past. Symbols of heroism, drama, and meaningful suffering, they have been transplanted with fictional versions of themselves, where no death was meaningless, no battle without merit. Our over-education in these wars has made their suffering oddly familiar to us: the announcement of Battlefield 1 was greeted with many a dark joke about mustard gas and death by disease in muddy trenches, but you will fail to find similar jokes about how the soldiers of Battlefield 4 or Call of Duty are more likely to die by suicide or transport accidents than enemy fire.

a violence towards history

While our own generation has been dying on foreign soil since the turn of the century, we have been happily consuming videogame depictions of these wars or analogs of them, made palatable by their status as speculative fiction. To jump to claims of historical inaccuracy and disgust around Battlefield 1, but not this long history of misrepresentation is a hollow gesture, one motivated by a questionable respect for our “sacred” conflicts of the past. Should our allegiance not be to our own time, own generation? The truth is we don’t believe in our conflicts, or they are too complicated for us to invest in, and their imagery is tired, worn out, lost in the cacophony of news video and cinema.

The World Wars represent something we can believe in, to quote theorist Jean Baudrillard: “today one has the impression that history has retreated, leaving behind it an indifferent nebula, traversed by currents, but emptied of references. It is into this void that the phantasms of a past history recede, the panoply of events, ideologies, retro fashions – no longer so much because people believe in them or still place some hope in them, but simply to resurrect the period when at least there was history, at least there was violence (albeit fascist), when at least life and death were at stake.” And so, it is the same trained respect, the same pseudo-religious power of these conflicts that leads us to return to them again and again. The ideas that are making critics uncomfortable with Battlefield 1 are the same ideas that motivated its creation in the first place: the mythical status of historical wars.

The violence that Battlefield 1 is contributing to is then not the real violence of war, neither is it a violence towards the memories or realities of those who fought and died in World War I. It is instead a violence towards history, an aggressive reinterpretation of our past in our own image, so as to suggest that our contemporary logic possesses some kind of truth. Like Far Cry Primal—which as Kill Screen’s Matt Margini pointed out, was somehow searching for an origin point for its own logic of hunting, killing, and upgrading—Battlefield 1 is an attempt to dovetail the origins of the series’ own gameplay and logic with the origins of mechanized mass war.

When the game’s lead designer Daniel Berlin says the team wishes to “challenge some preconceptions” about the first World War he means they aim to reshape it for their own means. But before you take this as a weighty accusation, it’s important to understand that this violence towards history has been around for longer than we realize. It has operated in high-school classrooms and on TV documentaries, in cinemas and through videogames. It is what has shaped our relationship to our own past, what has given us our understanding of the world. As a child I built models of Messerschmitts and Spitfires, Kubelwagens and Mark V tanks, decorating my room with hand-painted dioramas of the battle of Stalingrad or Verdun. I can’t help but feel affectionate towards these killing machines, to the angles of their plate armor or their shades of olive drab. We are more comfortable with old war when it is presented to us with noble bugles in the backdrop, black-and-white grain flowering beautifully across images of advancing artillery. We are conditioned to believe, to quote Baudrillard once more: “History is our lost referential, that is to say our myth.”

So let’s not trick ourselves into thinking that Battlefield 1 is even able to trample the memory of our ancestors, or that it disrespects the gravity of mass killing: that history was lost to us long ago. If we do so, we are simply playing into the game’s own borrowed gravitas. And by doing so we risk missing what is in front of us, the reality of the situation, which is that Battlefield 1, in its reconditioning of our great myths, tells us more about us, now, and our endless quest to find “new” things to sell to each other than it ever will ever say about the dead of the Somme or Verdun.