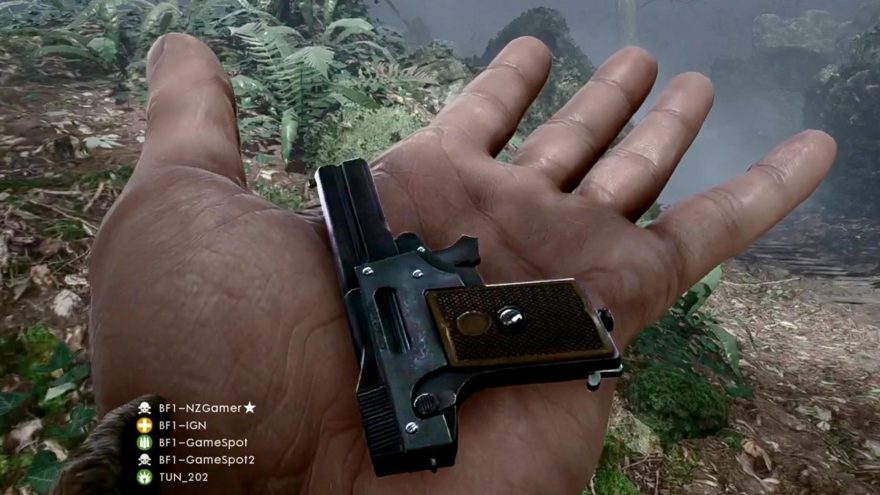 Picture this: you’re in the Battlefield 1 open beta. Chaos is happening all around you. Buildings are falling, gunshots are whizzing past your ear, narrowly missing. The fear of an airstrike or mustard gas bombing always looms in the background. As the action crescendos, an enemy jumps out of a bush, and kills you with a gun no bigger than a credit card. A fucking Kolibri.

The 2mm Kolibri is a very real, very tiny handgun—first manufactured in 1910, it remains the world’s smallest centerfire cartridge. The name Kolibri literally means hummingbird, although I would argue here that the gun’s avian counterpart remains the swiftest of the two. The puny pistol weighs all of a few grams—notoriously inaccurate, it could barely penetrate pine board if you were lucky enough to hit anything.

The puny pistol weighs all of a few grams

The Kolibri 2mm is the latest in a long line of videogame weapons and tactics solely manufactured for “disrespect.” In Counter-Strike culture, disrespect is a way of describing an overkill—a dance of sorts, toying with prey that is so clearly doomed— that it is reduced to pure spectacle for the other team.

Concepts of “humiliation” and “disrespect” in Counter-Strike have been around from the start in 1999: when an opponent is defeated so easily, or in such a hilarious manner, that the overkill is deemed “disrespectful.” Depending on who you’re playing with, it’s an integral part of competitive multiplayer, or a childish practice that will get you banned sooner or later. If you’re unfamiliar with the concept, here’s a good place to start.

Although video footage of Battlefield 1 reveals that the Kolibri is not a player’s first-choice weapon (unsurprisingly), they do seem to have some fun with it when forced to:


The Kolibri 2mm “Hummingbird” is yet another example of Battlefield 1’s outrageous, dramatic, take on total warfare. While the series has grown less “historical” over time, it seems to only be getting more silly—and, coming from a history buff, that’s exactly the way it should be.