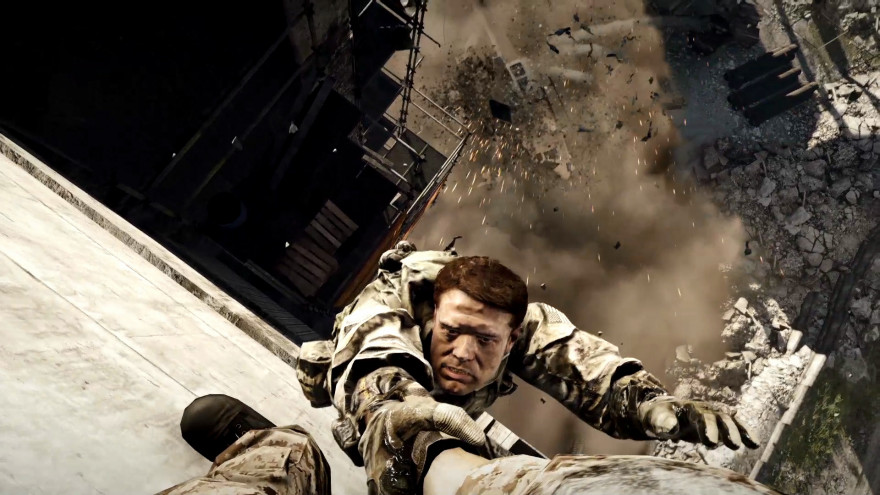 There’s an air of futility surrounding any attempt to write about games from the Activision-EA axis of first-person shooters. Like Michael Bay movies or Twinkies, the Call of Duty and Battlefield franchises are inured to criticism. However threadbare the story line, however pasteboard the characters, however samey the gameplay, they will continue to make indecent amounts of money. This is because the single-player experience is, at this point, something of a vestigial tail. It has nothing to do with the game’s ability to make gobs and gobs of money.

In the weeks before Battlefield 4’s release, DICE began to quietly sweep its solo play mode under the carpet. It debuted a series of 30-second spots in its “Real Players, Real Gameplay” campaign, featuring a series of average dudes sitting in armchairs, enthusiastically recalling their experiences in the multiplayer world. The single-player mode is entirely absent from their monologues, likely an acknowledgement by the developer and its parent company that, by many measures, it isn’t very good. The campaign is an impressive piece of gaming architecture, grandiose in scale, where everything on screen can be destroyed, but you can’t shake the idea that it’s an afterthought.

The plot is perfunctory, summoning China’s semi-totalitarian government as the most clear, present, and recent danger to American sovereignty. You, the appropriately named “Seargeant Recker,” lead a team of soldiers behind enemy lines. You exfiltrate a pair of Chinese VIPs from Shanghai, wend your way to Singapore, wind up imprisoned in the Kunlun mountains, and end up somewhere in the Suez Canal. There’s a boat level, a car level, an underwater level, and a demolition level; there’s betrayal, redemption, last-minute twists, and a meek moral choice at the climax that doesn’t affect the game’s final outcome at all. The less said about the campaign the better, because at six to eight hours of playtime, it’s a minor part of the overall Battlefield 4 experience.

Or maybe it’s a fair reflection of the title’s overall ethos, which is as close as mainstream gaming comes to a Zen-like experience. I don’t mean the brooding existential longing that characterizes many self-consciously artistic games, but rather this: what just transpired is irrelevant; what is about to come is immaterial; all that matters is what’s going on in this exact moment. The franchise has long focussed on its moment-to-moment ridiculousness, and Youtube is riddled with online players performing absurd feats of destruction. And as the aforementioned video campaign has indicated, each death of your multiplayer character presents a new opportunity—not to advance to the next objective, but to execute some preposterous, Rambo-like maneuvers.

That’s not entirely fair, because more so than the Call of Duty franchise, the Battlefield games have given more emphasis to cooperative team-play. To wit, Battlefield 2’s commander mode has returned, where a supplemental squad member orchestrates the action from an omniscient third-person perspective, with the ability to call in missile strikes or drop supplies to troops on the ground. Yet a large number of its pleasures come far away from the constant thrum of levelling up and unlocking new weapons or gadgets. It’s much more fun—though it does compromise the objective—to find an alternate way around or under an objective, and blow shit up in the most creative, off-the-beaten path manner possible.

The changes wrought by this destruction, which DICE terms “Levolution,” are evolutionary, rather than revolutionary, however.

Battlefield’s other point of differentiation comes from the changeability of its environment. You can bring down the enormous tower in Siege of Shanghai, or cause the Lancang Dam to collapse, both of which change the way through to the next objective. The changes wrought by this destruction, which DICE terms “Levolution,” are evolutionary, rather than revolutionary, however. Once you’ve played these multiplayer levels once or twice, they become rather run-of-the mill. The destructive elements seem to break and reassemble the same way each time, making it relatively easy to adapt once they next occur. Because at some point, someone will decide to take down these mammoth structures—but largely just because they’re there, rather than for some novel, epoch-making mode of gameplay experience.

That’s the crux of these blockbuster first person shooters. Over the past decade, each instalment in the Call of Duty and Battlefield series has trumpeted nominally revolutionary advancements—Planes! Dogs! Fish that swim away! Zombies!—that are really incremental, and distract from the fact that what the FPS marketplace sees, year after year, is a finer buff and polish to the paint job. The car underneath is the same. Given the obscene number of hours I put into BF3’s multiplayer mode, I’m clearly not immune to Battlefield’s pleasures, especially the breadth of vehicular warfare, its scary-real weaponry, and the way it prizes teamwork over COD-mandatory fast twitchiness. But at a certain point, boredom sets in, one that the addictive mechanics of next-level, next-gun, next-gadget cannot slake.