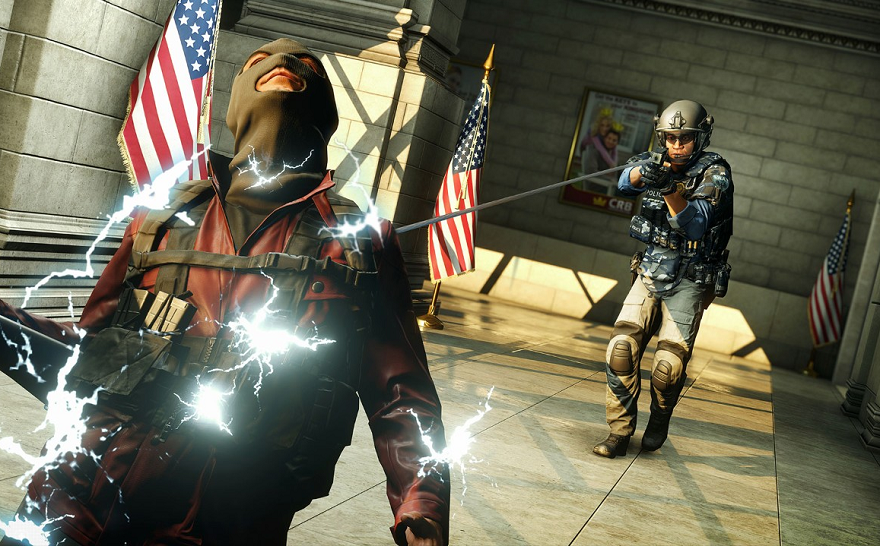 “It’s the ‘80s all over again!” I hear this phrase at least twice in my playthrough of Battlefield Hardline, a shooter with delusions of police procedural sensibilities. Stoddard, a proverbial “dirty cop,” spits the line as a flippant dismissal to the rise of drug trafficking and violence in Miami. Later, on a fan boat in the everglades, the protagonist Mendoza sighs and delivers the phrase with tired acceptance before he proceeds to gun down whichever drug runners find themselves in his crosshairs.

I don’t suppose they’re wrong. As far as Battlefield Hardline is concerned, the 1980s may as well have never ended.

In the Pizza Hut of a small Mississippi town, there was an arcade cabinet of the game NARC, a side scrolling shoot-em-up in which the player blasts law and order across a digital city in a shower of pixelated body parts and the laughter of a bunch of kids in faded shirts and sideways caps. The player controlled either Max Force or Hit Man—two Robocop-looking badasses equipped with automatic weapons and missile launchers to take down junkie terrorists clad in brown overcoats. NARC is a quintessential Reagan-era artifact, a digital manifestation of the “War on Drugs” movement that exploded in 1980s America reduced to its most digestible form.

To us, though, it was a game where you shoot the bad guys. While my friends and I were always content to gun down most of the enemies, occasionally one of them would surrender, and the word “BUSTED” would float over his head before he disappeared. We found out that “busting” the criminals awarded more points, but we could never make it work consistently.

It was more satisfying to shoot them anyway. We played the hell out of that game, sinking quarter after quarter to fight a digital drug war. I don’t think we ever completed the game. Eventually, NARC was removed from Pizza Hut. Rumor had it someone’s mom complained about the violence.

Hardline has a “busted” system as well. Flashing a badge and slapping some bracelets on a criminal awards more “points” in the form of unlocking customizable options for your weapons. It’s hardly a consistent design, giving people who prefer nonlethal tactics only augmentations that make killing more efficient. Like the arrest system in NARC, Hardline’s struggles to explain how it fits in a game about killing wave after wave of criminals. While the game insists that arrests should take priority, the environments fit gunplay much more organically.

Hardline blatantly fears actually having to say something about the police

This disconnect is a symptom of a much larger problem with Hardline—it is the most superficially careful game I’ve ever played. From the multi-ethnic strike team to the “power corrupts” mission statement, Hardline disingenuously covers its tracks in an effort to make the player forget she is playing a game where shooting and subduing people from behind a badge mean almost the same thing. Even when Mendoza turns rogue to take down his (former) corrupt police captain, the game pits the player against a private security force instead of street criminals for low-stakes adversaries.

Essentially, Hardline blatantly fears actually having to say something about the police. It’s far easier to arm the player and point her toward the bad guys.

My cousin had a copy of NARC for his NES, and I borrowed the game often. The graphics and sounds were neutered imitations of the more advanced colors and audio design of the arcade machine. Fighting through waves of junkies lacked the hyperviolence of its more advanced counterpart, but the core experience remained the same. While playing, I didn’t think about the terrible misallocation of government funds that made the War on Drugs possible. I didn’t understand the massive increase in incarceration, especially among minority populations. I could not have grasped the socioeconomic impact of creating a permanent underclass found in the rising prison populations.

For me, and countless others, it was a fun way to pass the time. It was fun to fight an endless digital drug war, gunning down waves of pushers and junkies with ludicrous aggression. Funnily enough, despite the hours I poured into the game, I don’t think I ever saw the final screen.

Across town, Pizza Hut replaced NARC with newer, better games. Fresh cabinets seemed to pop up at every birthday party I attended, a different game gracing each subsequent visit.

All of them did, however, have one thing in common: an idle screen with the F.B.I. seal, under which in pixelated text read “Winners Don’t Use Drugs.”

There’s a veritable gulf of police games between 1988’s NARC and Battlefield Hardline. Police Quest, SWAT, the True Crime games, Crackdown, and countless others mark time between these two, and all carry with them the baggage of government-sanctioned violence. Nevertheless, every bullets I used to solve my digital policing trials took me back to a late 80s arcade game that served as a flashy, violent piece of drug war propaganda. To Hardline’s credit, it at least attempts a narrative of something other than NARC’s “drugs are bad” sloganeering, albeit one picked from the lowest- hanging fruit of cop drama tropism, to validate the player’s actions.

And that’s the whole sorry point of Battlefield Hardline. It could have said something, anything about what it means to pretend to be police in a time of civil unrest, to struggle with institutional racism, to engage with moral weight of police brutality. Hardline’s resolute muteness poses significant problems by creating a mediated narrative normalizing police violence. The game’s drug war focus looks back on a specific era in American history without acknowledging any of its impact other than a backdrop to shoot some people from the cover of a blue shield.

Narc remains a tone deaf and sloppy piece of late-80s’ anti-drug propaganda in the form of an arcade game, one I remember tucked away in a grease-stained corner of a Mississippi Pizza Hut. Still, we can learn something by looking back at it and seeing the problematic popular narrative of the Reagan-era crackdown on drugs that has continued to unfurl across media. We can notice how the game reduces the narrative of the drug war to its simplest terms with crass efficiency. It’s more a curiosity than an icon, now, but it serves as a decent lens into its time and the foundation of a narrative about playing as digital law enforcement.

Perhaps we can do the same with Battlefield Hardline. We can look to it and acknowledge how ultimately toothless the game is considering its context, arriving at a time when unarmed civilian deaths at the hands of police are gracing the newsreels. We can see in its lack of substance a reflection of a disturbing social complacency when it comes to exploring complicated issues like police violence and systemic racism. We can also recognize what little faith it has in its players to wrestle with difficult concepts, to find something meaningful and troubling behind using a digital badge and police-issued firearm in equal measure to solve our crime problems.

So maybe for Battlefield Hardline it really is “the 80’s all over again.” But that’s hardly a statement to take lightly.