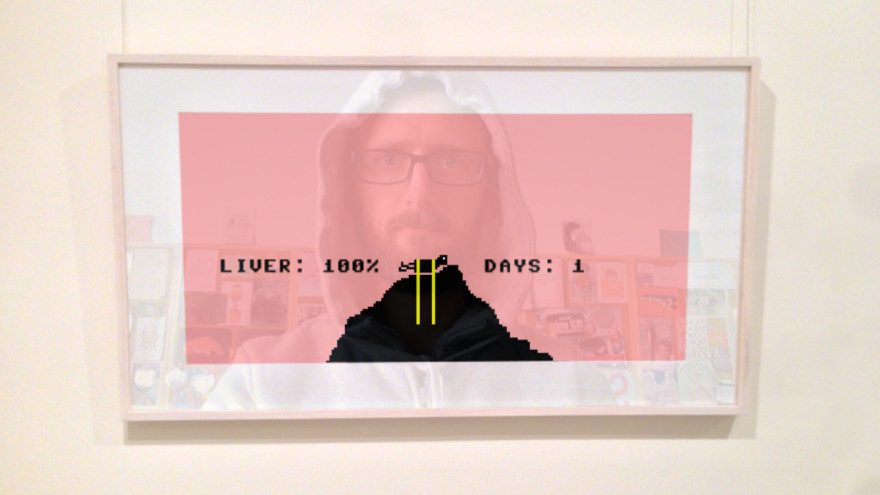 Pippin Barr’s new game, the cheekily titled Let’s Play: Let’s Play: Ancient Greek Punishment: Art Edition Edition, is the experience of going to a gallery, looking at what lies between the borders of that carbon pigment frame—the ART, in other words—and accidentally finding yourself in the glass. Literally: the game uses your computer’s camera to pin your reflection to the screen, making it part of the game. You are outside your head now, between the work and your bore-eyed face, and must reconcile the two together. But in Pippin’s game you find yourself conscripted: a pixellated Prometheus is pinned to the mountain peak, and daily the eagle descends. A left-click makes the Greek titan writhe and shoos away the prey-bird for a bit, but it’ll be back, over and onward into forever. (The game sports day and liver-fixity counters and is through the system endless.)

“Remediation” is the keyword Barr uses for Ancient Greek Punishment. Nothing can prevent Prometheus’s punishment, so it is remedial in the sense that a never-living god-being is ever-learning what he maybe shouldn’t have done, but this game isn’t for Prometheus, unlike so many humanistic odes. Its interest is in the space between you and the work, re-remediation and re-re-remediation. Like a mirror maze it reveals to you faults moral, mental, and human that you can do nothing to fix. Also, your hair might not look great today.

Let’s Play: Let’s Play: Ancient Greek Punishment: Art Edition Edition is playable on most browsers and even has mobile functionality, thanks to some interesting technical finagling that Barr details on his blog, which is as interesting as the game itself. You can play it here.