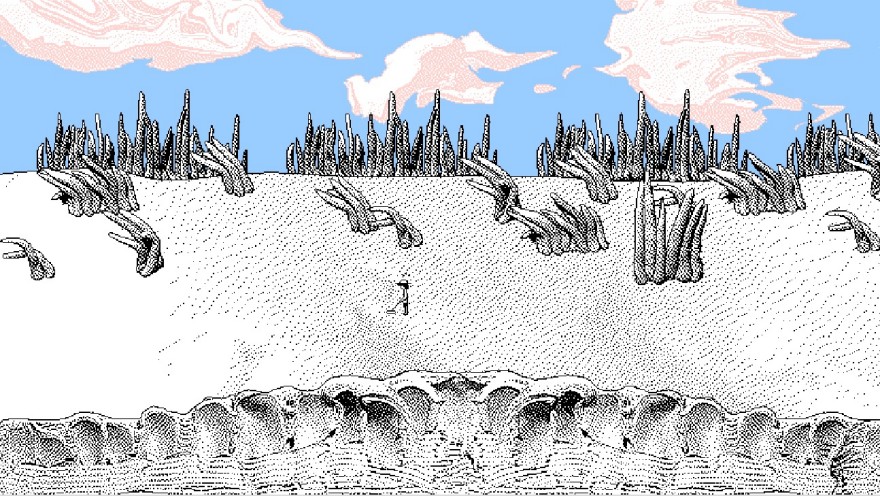 Beaches are naturally mysterious places. They’re the space between the oceans and land; where creatures with life’s first legs floundered upon millions of years ago. Neither liquid nor a solid mass, beaches are sedimentary and capable of burying the secrets that the waves wash up from lands afar.

The shore seems to be the perfect setting to explore the “Beneath the Surface” theme of the Ludum Dare 29 game jam, which took place last weekend. Mason Lindroth certainly seemed to think so, as is proven with his entry to the jam, Beachcomber. As the title suggests, it involves combing a beach with a metal detector, but the objects you happen across under the sand take you down strange paths, towards one of the game’s three endings.

Could there be life under these “sands”?

You can recognize this as a Lindroth game due to the sparing, dotty Apple II-like visuals and use of claymation. The aesthetic compliments Mason’s interest in warping the ordinary, as seen in Journalière: black-and-white is the status quo, whereas a slight dash of color can punctuate a peculiar presence with immediacy.

Lindroth’s understanding of clay as a malleable body that is capable of hosting a representation of life was touched upon slightly in Weird Egg and Crushing Finger. He revisits this idea, if only in passing, within Beachcomber. As you wander the beach—moving past the large fingers of thick plants and finger-pushed clay-ocean waves—your detector will signal that something lies underneath.

Once you find the exact location of the buried discovery, you’ll shift to a first-person perspective and use a real hand (it’s a photo animation) to claw at the sand. Except it’s not sand; it’s clay. Could there be life under these “sands”? Your first and second find won’t be remarkable. But the third quickly turns gross, enticing the same reaction from me that I had during my first viewing of Luis Buñuel’s famous opening scene in Un Chien Andalou.

To say any more would be to miss the point of Beachcomber. As with the activity it’s named after, the delights of this videogame lie in the anticipation of the unknown, hiding underfoot. Being a Mason Lindroth game, you can guarantee that your findings will be far more surreal than a pirate’s chest of gold or a bike tire. Prepare for the unexpected, and make sure to replay Beachcomber to experience all three endings.

You can play Beachcomber in your browser using the link provided on the game’s Ludum Dare page.