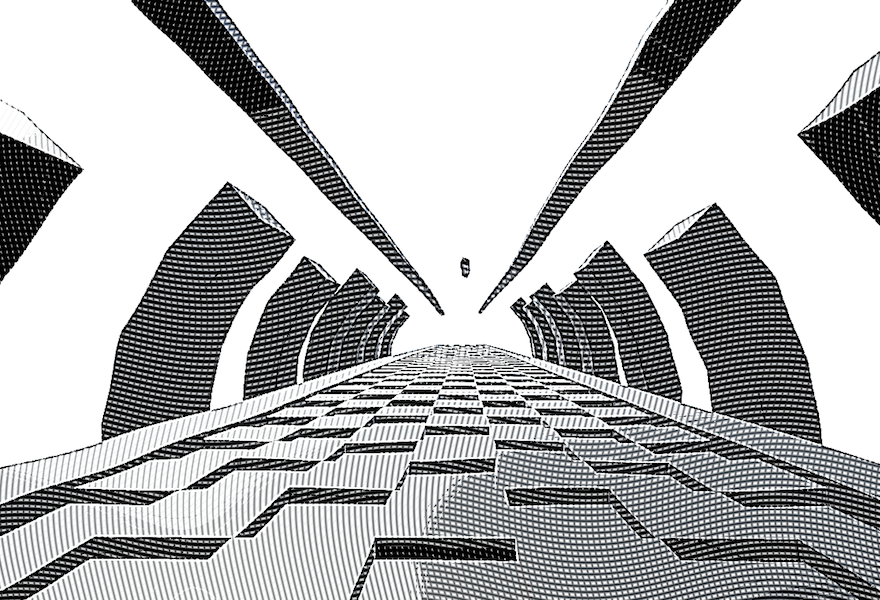 Stroke is a new short game from James Coffey that plays a bit like a movie theater roller coaster ride. You know the sort: short vignettes that advertise the brand of the theater right after the previews finish but before the movie starts. These shorts are known for their over-the-top nature and flashy effects, with coaster tracks being made out of licorice or popcorn kernels exploding in the distance as the cart swings by. There are many different versions depending on which theater you visit, but the one factor linking them all together is that something is always moving in them. Similarly, something is always moving in Stroke.

On his website, Coffey doesn’t say much about himself other than that he is a “game designer with a very strong passion towards the visual side of game design.” This is understandable, as Stroke is first and foremost a game about visual effects. Arches form over you while running forward, and geometric shapes fade in and out of existence in time with your footsteps. Gems wait to be caught at the end of tracks before disappearing just as you reach them, and hidden springs blast you into the sky at unexpected moments. It’s a highly choreographed affair, with all the pomp of a Vegas show. Except for one key difference: there’s no color.

something is always moving

Typically, special effects features tend to go for neon and bright colors to emphasize their excitement, as is the case in Sonic the Hedgehog’s similar special stages. But Coffey instead decided to look to atmospheric monochromatic games like Limbo (2010) and The Unfinished Swan (2012) for inspiration. It’s not what one would immediately expect from a game of this style, but it works well, emphasizing the movement of the environment rather than the glamour of its architecture.

The effects in the game are actually inspired by Coffey’s previous game, Orbits, which allows players to create their own visual effects (this time in amazing technicolor) while listening to a song from Australian electronic music producer Flume. Similarly, Stroke is set to an upbeat electronic track that pairs well with the momentum of the game.

Stroke is available for free on itch.io, and is only about 10 minutes long. My suggestion is to hold the shift key and just keep running forward the whole time. The game will play out almost like a cartoon, with its minimalist visuals dancing across the screen like an art-deco burlesque club. Then you can load it up again and see what happens when you slow down. The bombast of the visuals pairs well with the black-and-white color scheme, creating a roller coaster worth getting in line for over and over.