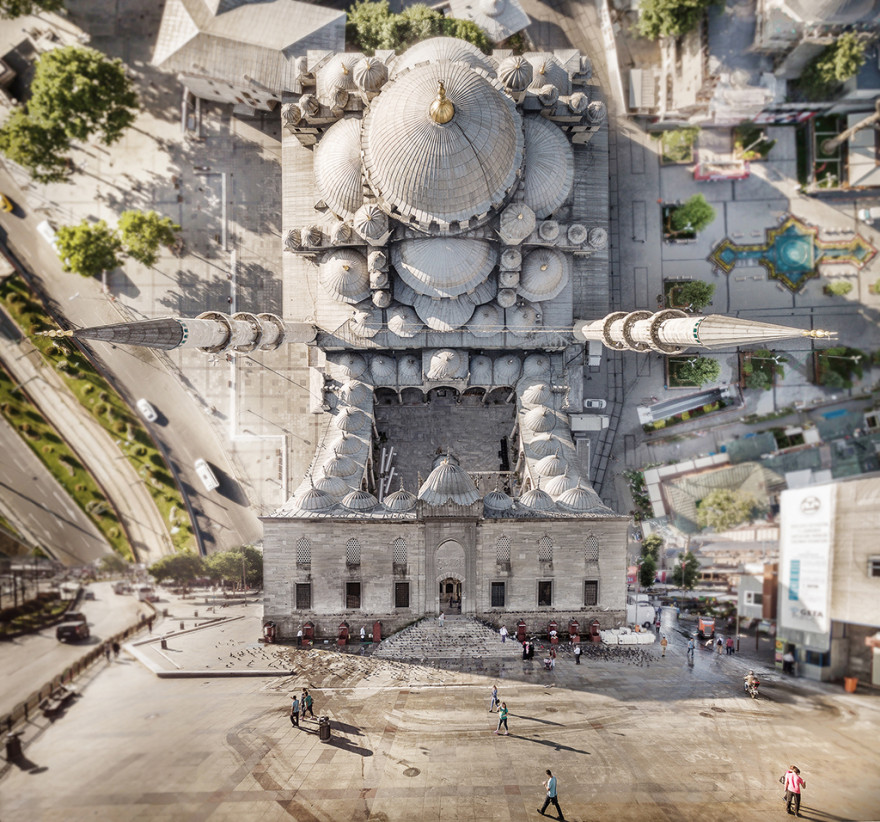 Photography has always possessed this peculiar quality of contorting a space as well as documenting it. For instance, take motion photography, which captures the momentum of a moving object in a static image while often at the same time distilling the background into a blur of bokeh and light trails. Or tilt-shift photography, where the selective focus of a frame reduces the enormous minutiae of daily human life into a diorama of dramas. Filmmaker and photographer Aydin Büyüktas’ Flatland series, named after Edwin Abbott’s multi-dimensional novella, shapes the world of its subjects while at the same time revealing them.

Compiling a smattering of drone photos, Büyüktas stitches them together to create spatially dense overhead photographs of the cities of Turkey. The result echoes the reality-bending illusions of M.C. Escher and Christopher Nolan’s Inception (2010). In his own words, Büyüktas describes Flatland as a body of work that “aims to leave the viewer alone with a surprising visuality [that is as] ironic as it is multidimensional in its romantic point of view.” But aside from multifaceted dreamspaces, Flatland shares an uncanny likeness to the ‘Stanford torus’ domestic colonies conceptualized by NASA in the mid-seventies.

Commissioned in the summer of 1975 in conjunction with a NASA-helmed symposium with Stanford University, the concept art for the donut-shaped city ships were inspired by the ideas and theories of aerospace engineers Wernher von Braun and Herman Potočnik. It shouldn’t surprise you that their concepts also inspired the visual language of some of the most iconic stories of science fiction—2001: A Space Odyssey (1968), Elysium (2013), and Mobile Suit Gundam (1980). Not to mention the torus’ obvious descendants in the space of interactive fiction, its impossible ascending planes informing the shape of the labyrinthine dimensions of the Citadel from Mass Effect (2007), and Halo’s (2001) titular ring-shaped menageries turned weapons of mass destruction.

Büyüktas’s work invokes all these comparisons and more, pulling from the greatest defining qualities of photography and imbuing them with that adventurous spirit to reshape our understanding of the world as readily as we perceive it.

You can see the full Flatland series over on Büyüktas’s website.

All images created by and belong to Aydin Büyüktas.