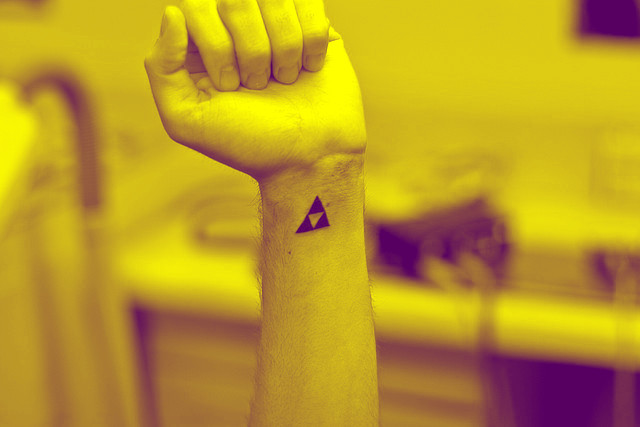 Don’t look now, but as of this writing a detailed hardcover on the history of a videogame is both a New York Times #1 best-seller and the number one selling book on Amazon in the U.S.

The Legend of Zelda: Hyrule Historia was originally available in 2010 as a Japan-only celebration of Nintendo’s long-standing franchise.  This love manuscript to Link began as a shared project between Nintendo and Shogakukan, a major Japanese publisher of books and manga, to showcase unearthed concept art, design plans, storyboards and an “official” timeline of the Zelda world’s twenty-five years.  Western fans clamored for its release stateside. Due to the scope of translation and its niche audience, few held out hope.

Last year Dark Horse Books announced it would be localizing Hyrule Historia, and it shot to number one on Amazon’s book charts based on pre-orders alone. It finally released last month on January 29th. This weekend’s New York Times Book Review will list Historia at number one in the category of ‘Hardcover Advice/Misc.’

Some might feign nonchalance at the achievement. “Of course,” you say, “the exact audience for this book is the same audience scouring websites for game news. Amazon’s just a click away.” If Hyrule Historia topped the shopping list of a specialty site like NewEgg.com or even Best Buy, I’d grant you the shoulder-shrug.

But this is Amazon, the single largest online retailer that sells everything from… well, everything. Game fans make up a small percentage of those buying books through the site. The #1 ranking, if only for a day or two, would speak volumes to how hungry and influential the growing population of game-players has become. Historia has remained at number one since its release, almost three weeks ago.

Hyrule Historia’s success speaks volumes to how hungry and influential the growing population of game-players has become.

Patrick Thorpe is the editor at Dark Horse Books who worked on the U.S. edition with Nintendo. He told me via email that Historia brought to fruition a long-standing hope of his.

“I had been talking to Nintendo about doing some sort of project with us for quite some time and had actually pitched a Zelda art/history book to them. They told me that something very similar was being put together in Japan.”

Thorpe mentioned “offhandedly” to Nintendo that Dark Horse had worked on bringing Japanese books over to the west before. “A few months later, Nintendo e-mailed me and asked if we’d like to localize Hyrule Historia,” Thorpe wrote. “We were thrilled.”

But even Thorpe and his team were not prepared for the public’s enthusiasm.

“We knew that people wanted this book, but we had absolutely no idea that it would top the charts.” The seed of that groundswell of support is what made Dark Horse’s work possible in the first place.

“The fans were instrumental in bringing Hyrule Historia to the states. They signed online petitions. They flooded message boards. They spammed e-mails.” Eventually, Thorpe says they are getting almost the same book as Shogakuken’s original. Dark Horse translated the text, tweaked some interior pages, enlargened the format and designed a new cover.

“We ran every page of the book by [Nintendo] for approval, but they gave us tremendous freedom to do what we thought was best to make this a successful book in the English-speaking market.” The overwhelming success of the book was not just a professional goal for Thorpe.

“Every [job] has its exciting elements and quirks. But to say that I didn’t have a vested interest would be lying. I’ve gamed with Nintendo since the original NES, and played every Zelda game from The Legend of Zelda onward.”

The book itself leans heavily on later editions of the franchise, with a large section devoted to Wii’s Skyward Sword and the 2006 Gamecube/Wii release, Twilight Princess. But at 280 pages and four pounds, there’s more than enough room for rarely seen design documents and the touted timeline, which tries to make sense of a series based on parallel universes and split futures. Fans have shown they’re willing to shell out for a lovingly crafted supplement to their favorite games. And Historia’s chart-topping status shows a hungry market exists where few publishers dare to tread.

“To say that I didn’t have a vested interest would be lying.”

An estimated $202 billion was spent online in 2011, according to research firm Forrester. This was still only seven percent of the total retail sector, though that number assuredly grew last year. As games continue their march towards wider popular acceptance, these supplemental products–books, movies, even soundtracks–will have a deeper impact on their respective competition. In fact, the creation of a consistent world across multiple mediums has a name — transmedia–and is increasingly seen as not just a cross-promotional tool but a way to expand a story beyond the confines of a single platform.

Sounds far-fetched, maybe even undesirable. But as those who grew up with games continues to age and produce and consume, we might find the same dissolution between the borders of games and pop culture that we’ve seen with comic books and movies. Maybe then we’ll finally hear what Link sounds like.