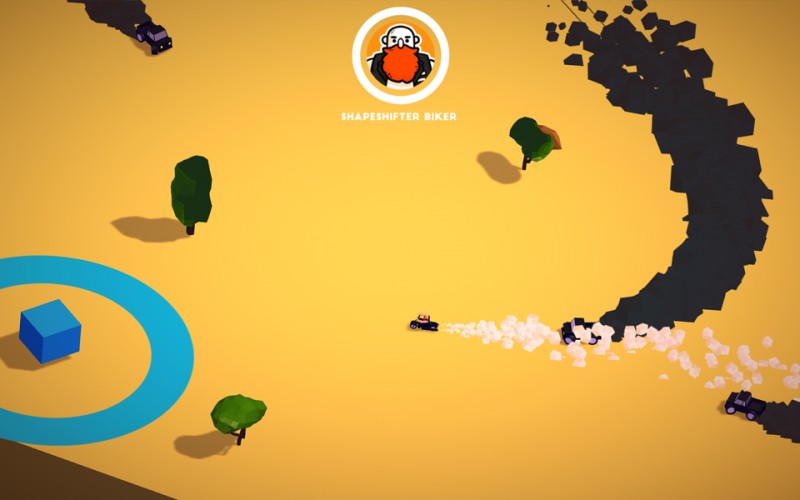 Last weekend, Renaud Forestié released a game called Shapeshifter Biker, a free-wheeling road movie mixed with shapeshifting mechanics. Shapeshifter Biker has you drive around a desert map on the lookout for animal power-ups that give you the ability to temporarily shapeshift into a variety of different animals—flying eagles or sheltered turtles. However, you are constantly being chased by ducks in large black cars who will stop at nothing to defeat you.

The game was created as a part of the latest Ludum Dare game jam, which gave participants 48 hours to create games under the theme “Shapeshift,” which was clearly at the core of Renaud’s design.

“There’s indeed a Mad Max feel to the game”

For his part, Renaud cites the final chase scene of Thelma and Louise (1991) as inspiration, mixed with a touch of Stephen King’s The Dark Tower series of novels, borrowing their strangeness that the theme called for. Set with a chill guitar soundtrack (performed by the Forestié’s band Uniform Motion) the game places you in a low-poly environment, just one dude on his bike trying to outrun an unstoppable force. There’s an unrelenting nature to the enemies and the chase—a slide across brightly colored dunes.

The game definitely also has elements of the Mad Max and other Road Warrior movies. “There’s indeed a Mad Max feel to the game, you’re not imagining it,” Forestié said. “It wasn’t the case as I first started building it, but looking at these black trucks go I thought I’d go all in, set things in a desert, and have fun with it.”

You can play Shapeshifter Biker on PC, Mac and Web now. You can also find more information about the other works of Renaud Forestié here.