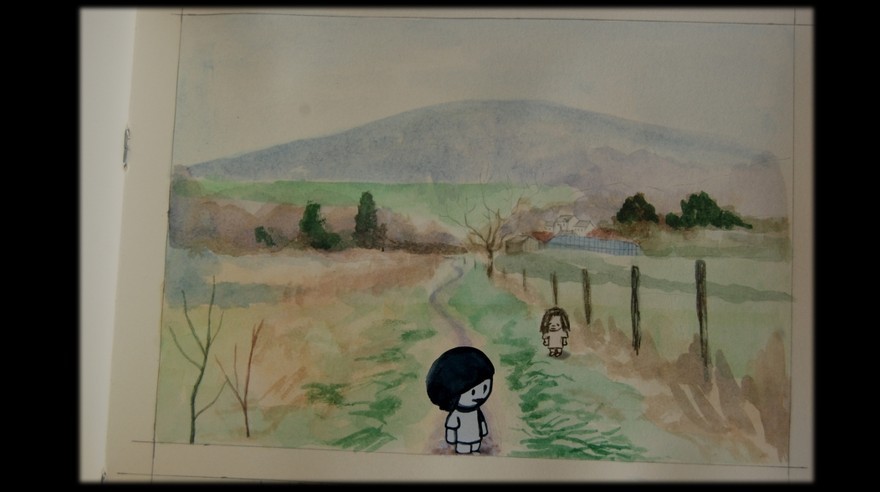 Beeswing seems desperate to inspire sentimentality and emotional appeal. The game stumbles gracelessly with what it means to “go home again,” falling into traps of maudlin exposition and dialogue that tries a bit too hard to mimic better voices. When the game allows its aesthetic design and sense of exploration to speak, however, it offers moments of genuine insight into how gameplay can reflect on that bizarre time when home is an uncanny place. I found myself surprised that Jack King-Spooner’s recreation of Beeswing was specific enough to not attempt some Platonic concept of “hometown” but rather a pseudo-mythical understanding of a particular place and time. What Beeswing loses beneath a veneer of self-important posturing, it re-gains in unflinching sincerity.

Beeswing owes its design origins to classic Zelda, to Earthbound, or the more recent To the Moon. It’s almost an anti-RPG, stripping away combat mechanics and grand narratives to focus on exploration and introspective reflection. Walking around the small town of Beeswing and the nearby woods and city affords numerous opportunities to hear the stories of the townsfolk and to find secret pockets tucked away in the recesses of the creator’s digital memories.

There’s a wonderful sense of exploration moving across fields, through the woods, and around the alleys of the city. The game’s music infuses each area with appropriate mood matched by the watercolor, claymation, and sketchbook visuals. The playful, kinetic acoustic rhythms of the woods provide stark contrast to the somber dirge that haunts the home for the elderly.

There’s a wonderful sense of exploration

Discovering landmarks and pieces of Scottish folklore give Beeswing a lived-in, mythic atmosphere glimpsed through the wonder of a child measured against the disillusioned detachment of a young adult. In these moments the game shines and shows genuine evidence of a young auteur. Every time the childlike character of Jack that romps through the fields and changes into his older self upon entering the city, the transition’s punch feels direct, sometimes even poignant.

The strength of this diegetic design falters, however, as soon as one of the denizens of Beeswing attempts to wax eloquent about the generalities of time and age. The beautifully crafted atmosphere begins to evaporate when a man outside a city bar ponders,

“I know I’m not old or anything like that but I sometimes get awashed with thoughts, thinking: Where did all that time go?”

Or when Jack comes across another townsperson who then ruminates sophomorically about language, saying,

“I wonder how anyone can ever really understand another person. If all our language is based off of our prior experience, then surely our definitions are different. My understanding of ‘hate’ or ‘abuse’ is different to yours. I guess we don’t have any choice. And then someone goes and tells me they love me, and I know what they mean, and I feel the same.”

This tendency to over-expose its thematic importance could be easily overlooked, except that it saturates the entire game. The dialogue here imitates the worst aspects of Jonathan Safran Foer or Dave Eggers, an obvious attempt at emotional depth too on-the-nose to be effective. The problem here is that so many of the themes blatantly referenced in the dialogue are already apparent in the game’s design. Walking across a playground where the shades of children play in phantom pantomime speaks so much more eloquently about time and memory than stilted posturing. Reading text boxes while hand-drawn characters relate a story from the town’s past proves interesting at times, but when some narrative voice creeps in and hits the player with some ponderous philosophizing disguised as depth, I wished for a game more content to let its design speak more often than its characters.

This limited scope forgets that we do more than just reflect when we encounter the past. We create. We divulge. We embellish. We rearrange the pieces to try and make some kind of sense out the nebulous mass of stories and lies and half-truths that make up who we are, and I wish the game allowed the player some way to engage with memory other than aimless wandering and tiresome dialogue.

Beeswing frustrates as much as it enchants

Perhaps hindered by the shackles of autobiography or perhaps the result of misdirected ambition, Beeswing frustrates as much as it enchants. It skirts along the edges of insight without finding a way to make our actions lead to more than vague platitudes about growing up. Its deeply personal look into a specific place from a specific perspective smashes against the individual interpretations it seems to invite. When I traveled to the bus stop to leave Beeswing and finish my playthrough, I wondered if perhaps I could have gained something from the game if I’d have come to it years ago. I don’t feel the same way about going home that I used to, and a younger me may have appreciated Beeswing when I first found out what it meant to try to return to a place that no longer feels like home. But there’s no way to be sure. Memory, after all, is a fickle thing.