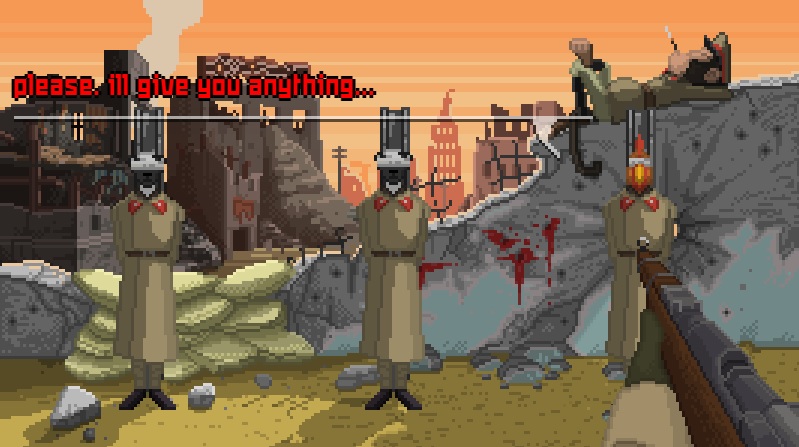 We’re used to the first-person shooter being a series of gunshots executed through bared teeth. Bang, bang, momentarily duck behind cover to heal, bang bang. That’s the usual rhythm. They’re shooting galleries that throw bodies of various intelligence and armor at us to shoot. There’s little thought required from us when playing these videogames beyond whether or not we should reload or hurl a grenade over our head. This is fine.

However, there are some shooters that have tried a more reflexive approach to this formula. They throw us into the lion’s den as usual, but when we emerge on the other side, covered in blood and our ears ringing, they sit us in the naughty corner and tell us to think about what we’ve done. Spec Ops: The Line and Hotline Miami are the obvious examples that have tried this.

the guy is still dead

The success of these two games in trying to teach us a lesson about violence in videogames varies depending on who you ask. The perceived problem with them has been discussed at length, but to keep it short, it’s that they’re primed to have us enjoy the elation of killing people—it’s not grim, it feels great and pushes the right chemicals around our brains. To demonstrate the issue here, imagine giving a kid some candy, letting them eat it with a big fat grin on their face, and then telling them off for eating the candy you just gave them. The lesson being taught here isn’t necessarily that eating candy is bad as the kid’s first-hand experience tells them the opposite of that.

Luckily, there are other ways that videogames can and have employed to have us better consider the act of shooting people in their virtual worlds. One of these is found in Jesse Venbrux’s 2008 experimental game Execution. It’s a game that begins by telling you that your actions have consequences. It then has you looking down a gun’s scope as it points at a guy tied to a pole. No context is given: you don’t know who you are, who this guy is and why he’s tied up, nor why you should or should not shoot him. None of that matters. The idea is for you to do as videogames have always taught you.

So you shoot the guy. You’re then told that you lose. Then, if you reload the game, thinking that you’ll try to find the win condition, it hits you. The start screen says “It’s already too late.” Returning to the gun’s scope you see that the guy is still dead from when you shot him before. No matter how many times you reload the game, he remains dead. You cannot win. The only way you can win is to exit the game before ever shooting him. You realize this and now you feel like shit.

You could play a cruel joke on your parents here

Now there is another videogame that has taken this idea in a different direction. Iron Sunset opens with you pointing a gun at three soldiers tied to poles. They are not silent this time. They beg for their lives when you point the rifle at them. Before all this, you’re told that one of them is a traitor and must be shot, but you don’t know which one. This means that you’ll probably shoot someone for a crime they haven’t committed. And, unlike Execution, you don’t “win” if you exit the game, as you’re supposed to shoot one of these people. When you do, you can reload the game and do it again, so it lacks the lasting impact of Execution. The big question, then, is who do you shoot?

The game doesn’t care who you shoot as long as you do it and watch them die. Once you have, the tables are turned on you, as you’re told that it’s your turn to be part of the lineup—get a taste of your own medicine. “Say something to save your life,” a line of text demands. You type whatever plea you can think of and submit it. It’s not good enough so you have to come up with something better. Your second attempt apparently won’t save your life either as the truth is that the game needs you to type out three different pleas. but you won’t know this.

After this stage is complete, you can submit an email address so that your family can be informed of your death. You could play a cruel joke on your parents here so that, one day, they receive an email saying that you’ve been killed. But you should probably just get it sent to your own email address. If you haven’t guessed what’s going on here, I’ll explain: the three pleas you write out are attached to one of the soldiers when someone else plays Iron Sunset. Hopefully, if they’re gut-wrenching and convincing enough, you won’t be shot. It’s a game that asks you to appeal to a fellow if unknown human and ask them not to shoot you. Can you do it? The chances are that, at some point, you will be killed, if not by a determined decision then by a random one. That’s when you’ll get the email. I’m still waiting for the news of my death to arrive.

You can play Iron Sunset in your browser on Newgrounds.