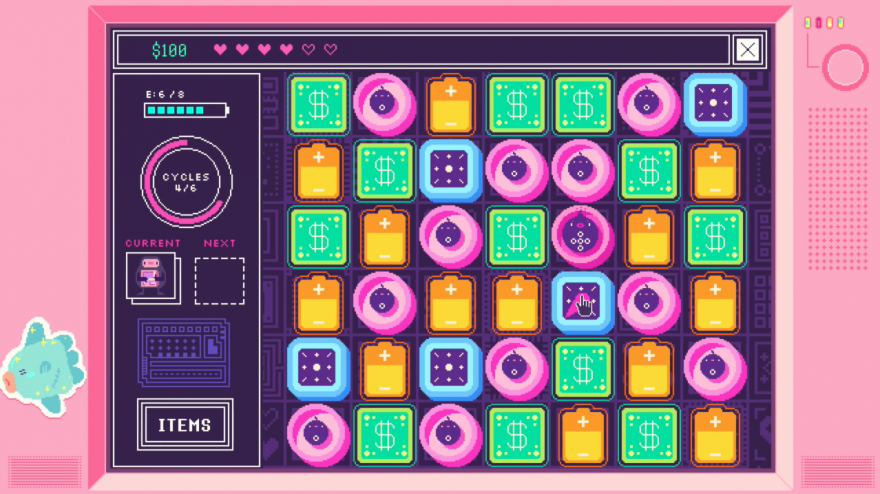 You’re a kid in a dust-ridden bookstore. The bookshelves rise high, nearly touching the ceiling, with ladders that slide the perimeter. Buried in the back of the store is the oldest of bookshelves. The color’s faded from the bindings of the books that sit within it, the text made hard to read by the wear and tear of decades’ toll. You reach in, and to your surprise, find a magical instruction book. It’s a How-To for becoming a wizard. Now flash forward to our reality, where something like that could maybe, possibly, actually happen—that is, except you manage to discover a prominent hacker’s computer laying around instead of a magical book. That’s the concept for Hexecutable’s Beglitched, a charmingly soft-hued pixel hacking adventure.

“Beglitched is,” began Alec Thomson, the programming half of developing duo Hexecutable, “…the longest thing we’ve worked on,” finished Jenny Jiao Hsia, the art half. The game’s opening is much like the example Thomson gave about finding an old magic book. The player begins by booting up a computer that doesn’t belong to them, and discovers that it belongs to an elite, “super mysterious” hacker: the Glitch Witch. The Glitch Witch promises to reveal more of her secrets to the the player but only if they decide to do missions for her. “It creates this situation where everyone in this world of computers and hackers knows who she is and they think you are her,” said Thomson. “But you know you’re not her, and it creates this sense of ‘how did I get here?’”

“I wanted to make a game about debugging that feels awesome.”

Beglitched is the second game developed by Thomson and Hsia as a team. Their first game, Stellar Smooch (2014), is an endearing iOS game about navigating two space probes to kiss, no matter what cute-faced planets get in their way. The lovable aesthetic didn’t halt with Stellar Smooch, but carried on and is amplified for their sophomore effort, Beglitched realizing it in a Windows 3.1-esque style.

Where most games use power in the form of an offense-driven weapon, Beglitched’s weaponry takes shape in a very different form. Through uncovering hackers who are hiding in isolation, the player begins to possess power in the form of otherwise unknown information. Knowledge itself grows into a powerful tool that disconnects these people from one another. It’s simple in a sense like Minesweeper (1989), a game that Thomson claims is the root of his inspirations for the hacking gameplay in Beglitched. Coupled with the minimalism and fast pace of match-three-type games, Beglitched is a multi-layered experience.

Pastel hues and Tamagotchi sensibilities weren’t always at the forefront of Beglitched. Even in the early prototypes for the game, before Hsia came along to join the project, Thomson had a centered focus: making debugging fun. “There are times when you have very specific circumstances, like you know your system extremely well, and you can also probe it for information really well,” said Thomson. “And when you do that, and when you get into this state of flow you feel like a detective and it feels awesome. I wanted to make a game about debugging that feels awesome.” The detective feeling took shape in an early prototype with a procedurally generated crime game. As a detective, you interviewed witnesses to eventually find the criminal. In the end, the game didn’t work out. “It was too much like debugging,” Thomson mused.

Eventually, the crime map prototype was turned into DeepWeb, a hacker’s network grid. Yet, once again, no dice. “It wasn’t silly enough,” suggested Hsia, the game at this point obviously missing her sugary art style’s touch. In addition to Thomson’s own criticisms of the build—the most striking of all is it preventing “debugging for fun”—the game fell flat. Too green. Too cyberpunk-y. Even “generic,” as Hsia joked. When Hsia joined the project, her colorful ideas spurred inspiration into Thomson. “I was like ‘OMG’ we gotta do it,” he said. “Like a thumbs up emoji,” Hsia added.

Beglitched is still in development, but its “cyberpink” aesthetic and cheeky humor are already standing out among the crowd. Thumbs up emoji, indeed. 👍