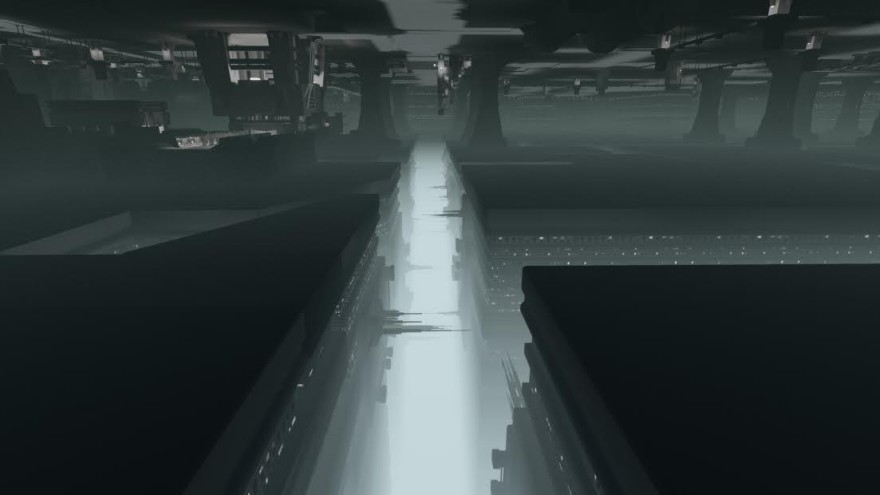 The first thing they teach you in drawing class is how to render basic three-dimensional shapes: the cube, the cone, the cylinder, and the sphere. Once you’ve got the contours laid out, you add the shadows, showing both the cast shadows on the table and the gradation of light to dark on the objects themselves. These shading techniques, known by the Renaissance-era Italian term Chiaroscuro (literally “light dark”), are what gives drawn objects texture and volume. The reason this lesson always comes first is that so many other objects are derivative of these simple shapes, making it a stable foundation for taking drawing in whatever direction you choose next.

The visually stunning NaissanceE, the debut game from developer Limasse Five, is a literal and metaphorical extension of this introductory Chiaroscuro lesson. Literal because it’s a study in light and shadow that consists almost entirely of grayscale cubes and cylinders. Metaphorical because each new room and puzzle you encounter is like a sketch from a different angle, capturing each artist’s personal style and technique applied to the same set of objects.

explore the abandoned Death Star of the mind: The Zone from Tarkovsky’s Stalker reimagined.

Make no mistake, NaissanceE is not a game about sketching, but about admiring the sketches that have been drawn for you by exploring them in 3D space. In NaissanceE, you walk around, you jump on platforms, you climb stairs, and you descend stairs, but mostly you look. Every corner of every room is lit for dramatic effect, making the game a screenshot photographer’s dream come true. Rooms aren’t just puzzle boxes, they’re tableaus: a series of Gursky readymades. The enormous Brutalist environs make up an ever-deeper underground sci-fi metropolis, fusing ancient Egyptian architecture’s monolithic tendencies with its penchant for hidden corridors. If you’re lost, you probably just haven’t looked around enough. To play NaissanceE is to explore the abandoned Death Star of the mind: The Zone from Tarkovsky’s Stalker reimagined.

NaissanceE’s sketches are loose, impressionistic works, often culling as much from stream of consciousness as the still life in front of you. As such, many individual rooms in the game are reminiscent of other first-person exploration titles, if only for fleeting encounters. Antichamber, The Stanley Parable, Kairo, Proteus, and Portal all have their moments, be it in mechanics, narrative sequencing, or level design. As a whole, NaissanceE doesn’t play exactly like any of these games. Instead, it’s more of an archeological expedition where you don’t know what you’ll uncover next.

What keeps this approach from feeling scattershot is NaissanceE’s emphasis on the Chiaroscuro of its fundamental shapes. It’s using the previous year’s sketches to teach the core lesson all over again. This isn’t a case of minimal design as stand-in for what would be more complex architecture, given a larger budget. No, NaissanceE wants to show the beauty and dynamism in simple forms: the elegant hollowness of immense pipework, the uncompromising darkness of void spaces, and the illusory potential to make three-dimensional objects appear flat. The balance of light and dark on NaissanceE’s walls is where the game derives its emotional resonance and power.

Where NaissanceE falters is when it occasionally loses sight of this basic conceit and attempts to be a more conventionally challenging video game. While certain puzzle sections keep the emphasis on the world around you, several action-platforming segments deviate the focus onto your character, which is just a vacant, unseen avatar, devoid of personality. These parts of the game are frustrating because the controls are optimized for looking, and unsuited to executing tightly timed precision maneuvers. The result is that you’ll die a lot and have to restart from painfully unforgiving checkpoints. All of a sudden your initiative shifts from “explore” to “get through this as fast as possible,” which does a disservice to the rest of the game’s contemplative structure.

On the other hand, this is the way sketching goes; they don’t all turn out like the vision you had in your head. That’s the humanness of the Chiaroscuro lesson, not that you succeed or fail in shading an image of a cube, but that in attempting to do so, you’ve, in some small way, expressed a bit of who you are. With NaissanceE, Limasse Five are showing us their finished work, and it’s undeniably a unique take on those familiar forms.