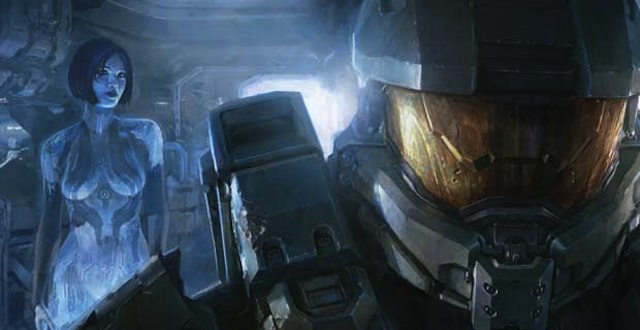 You’ve heard her soft voice probably a thousand times before. The supportive tech lady from your story-driven shooter. She usually fades into the background, easy to ignore until your videogame prompts you to pay attention to her. Maybe she needs saving. She probably needs saving.

The soft-voiced lady, perhaps a lab technician or military personnel—maybe even some sort of fairy—is a mainstay in the videogame world. She is basically forgettable. You’re the star. She supports. That’s what she does.

She’s Cortana in the Halo series; EDI in Mass Effect; Guardian Angel in Borderlands; Elena Ivanova in Vanquish. Sometimes she’s a little saltier, like Shaundi from the Saints Row series. Sometimes she’s just a helper; often she’s a lover; and occasionally, she turns out to be evil after all. Sometimes she isn’t a “she” at all, like Boone from Fallout: New Vegas, Sully from Uncharted, or Wheatley from Portal 2.

Whatever her permutation, she conforms to an archetype. A variation on either the “princess” in distress, or the reassuring, supportive mage or healer found primarily in role-playing games (notably Japanese titles like Final Fantasy, Dragon Quest, or EarthBound), she is more or less enslaved to work on your behalf. She fills in the plot with valuable intelligence, pulls strings in the background by overriding locked doors, and pilots vehicles to usher you from place to place. She serves you, or she serves the story. As such, she sets the stage for you, hero. 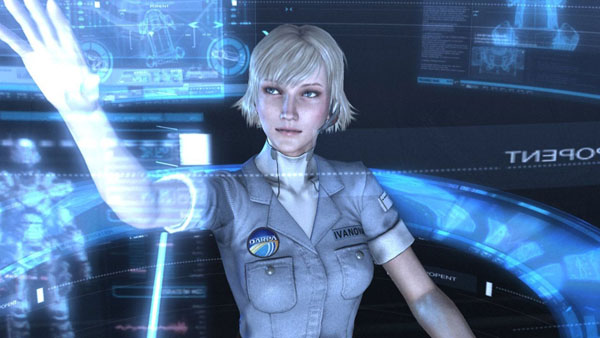 She may seem particular to videogames—an interactive medium that needs to convey to the player, well, what to do in order to play. The companion diffuses information and guidance in a relatable, humanoid package. She also provides an opportunity for romance or conflict. The female companion, however, has a long heritage in storytelling.

Irish literature possesses the archetype of the Lady Ireland, found in allegorical tales of Irish nationalism. Notably, Lady Gregory and W.B. Yeats’ collaborative play, Cathleen ni Houlihan, tells the story of a haggard old woman who comes to town seeking young men to recruit for her cause—to fight for an Irish independent state. She comes upon Peter Gillane, whose family invites her in—indicative of the value of “Irish hospitality”—and she proceeds to recite esoteric songs to them. The young man becomes transfixed, eventually agreeing to join her (i.e., give up his life for his country), and she is thus rejuvenated to an apparition of a beautiful young woman, a restored Ireland, at the end of the story.

Midna in The Legend of Zelda: Twilight Princess is a cheekier kind of Cathleen, the imp who needs you to take up arms for her sake, and to help restore Midna to her “true form.” Even Zelda herself, hidden, either in cowl, or disguised in the clothing of a man in Ocarina of Time, requires a male hero, a Link, for her restoration. Zelda represents Hyrule just as Midna represents the Twilight Realm, just as Cathleen represents Ireland. Unrequited romantic undertones give Midna and Zelda narrative importance as love interests. While not inherently such a bad thing, this only reinforces that Link’s companions are symbolic devices, rather than fleshed-out, autonomous characters. They are dehumanized—props, rather than personalities, who need to be rescued and loved by a male hero. 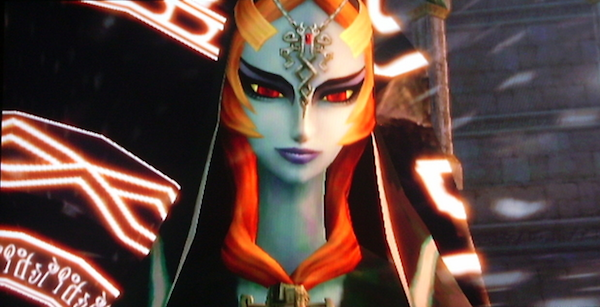 Still, they are not examples of a pure companion who is only there to direct or inform, like the series’ also-female Navi (who is only remarkable because of how relentlessly annoying she is). This “pure” companion is more like Athena in Homer’s Odyssey and the God of War series. She is a guardian of heroes, protecting those who fight out of duty and justice. She is Elena Ivanova of Vanquish: a military “prodigy” who spends all of her time cloistered in a control room like a sexy “deus ex machina.” Vanquish is supposed to be a satire of the Western “brown shooter,” so it’s hard to say whether Ivanova’s character, or lack thereof, is supposed to be a parody of the dutiful and reassuring female companion, or if it’s just towing the convention found in games like Halo or Borderlands.

In Borderlands the Guardian Angel has an even more removed presence. She is a strange entity somewhere between AI and fairy, who seems to exist expressly to counsel the person who awakens her. The Guardian Angel’s personality is subtle to the point of barely existing, though we know she’s something of a damsel. She’s not entirely sexual, but she is beautiful, soft, pleasantly-voiced, and reassuring. Even in such a game like Borderlands, where you can choose a female playable character, the Guardian Angel connotes, subliminally and maybe inadvertently, the same gendered power dynamic. You can assume she’s going to pop up every so often to tell you what to do or where to go. You can assume she’ll be gentle and wise. You can assume she’ll plead for your success and well-being.

Odysseus is aided by Athena, Protector of Heroes, but only from a distance. Like the Guardian Angel, Athena is generally “offscreen,” or in the background, appearing only when she is contextually relevant to protecting Odysseus from other mythic forces. She plants thoughts in his head, telling him where to go and what to do, not unlike Ivanova, Guardian Angel, or countless other maternalistic companions directing you throughout the game. And finally, she stands up to greater forces (Zeus) on his behalf—using not her strength, but her wits, like any mother would do for her son, like Zelda does for her Link, like Ivanova does for her Sam; and this list is very long.

She spends so much time filling context for the protagonist that her own story becomes a function of it, rather than a powerful force in it.

But she’s not always so innocent. Perhaps she’s duplicitous and deceitful, a Lady Macbeth—a shrewdly cold woman manipulating the protagonist for her own ambitions. She could be a femme fatale, like the Marquise de Merteuil, using her wiles to seduce and trap. She could be slightly untrustworthy like EDI; or completely unreliable like Portal’s GlaDOS or System Shock’s SHODAN, who ultimately force you to mistrust the figure meant to help you.

While this can be a highly effective way to inspire feelings of betrayal, disappointment, and anger in the player, let’s illustrate how disquieting the device can be: turn to Dead Rising 2. Stacey Forsythe might just be the romantic, sexual, helpful, and serviceable background white noise you need to complete your missions, but in Dead Rising 2: Off the Record (a later release featuring an alternate storyline), she turns out to be complicit in some evil agenda. And curiously, as Stacey embraces her evil persona, her gait and clothing also become a strangely sexualized, body-hugging jumpsuit—in contrast to the more innocent and modest jeans, T-shirt, and jacket she traditionally wears, connoting a strikingly old-fashioned link between Stacey’s level of danger as a character and her sexual confidence. We can reasonably interpret this as the Marquise, or the Circe, or, hell, even the witch in Hansel and Gretel, seducing you, taking advantage of you with her feminine wiles only to exploit or abuse you.

The companion, in these games, is supposed to be a helper and a friend—perhaps a lover. So why do we keep taking her for granted? We put our trust in the system of the game, and by extension, any arm of that system that tells us where to go and what to do. Cara Ellison’s short but poignant piece on motherhood and gendered AI explores what happens when this trust is broken:

Videogames use this idea of the controlling mother figure to play with us, to scare us. She’s meant to be caring, protective and helpful but she often turns out a bitch from hell. I’m talking about the soothing computer voice—the Artificial Intelligence we all trust. And these days, it’s usually a ‘she.’

Some games reverse gender to interesting effect. The Stanley Parable not only forces the player to confront his lack of agency within a videogame, where every consequence is scripted, but also deliberately engenders mistrust of the ominous, disembodied narrator—who effectively acts like a male companion. It thus muses on the player’s role within a system and the trust we place in these systems. The soothing, paternal omniscient voice prescribes advice, rather than just offers it—these are instructions he’s giving you and you are meant to follow them to get the “best” ending. Rebelling against the voice of authority, the O’Brien, leads to a generally helpless situation. But obeying him is mindless.

Interestingly, the male voice’s counterpart is female, and she appears to be the one on your side, questioning and decrying the male overlord by telling you not to play. But we don’t listen to her: she fades into another afterthought, as we chase the system of the game, trying vainly to find a hero fantasy. It is a considerably evocative and unusual use of the female companion trope. Like others, she remains unsung, but this fact speaks to the assumptions we make as players—what it means to operate within a system, and what it says that wetake the word of a companion for granted. A companion can thus be symbolic of the themes present in the game without compromising on character. 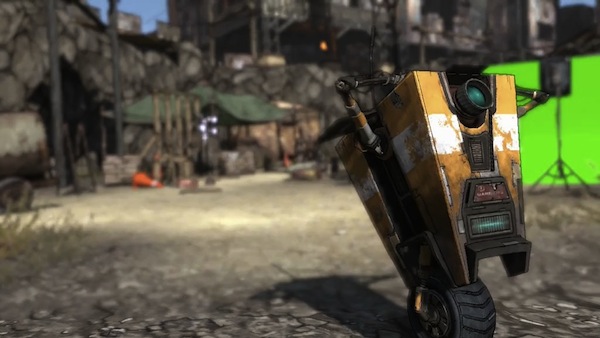 Even Borderlands contains the male-voiced Claptrap, a helper robot who quite often has landed himself in considerable danger or distress. But here I sense a gender confusion. Claptrap is male, but also somewhat infantilized by being adorably hapless. His general uselessness is endearing, his voice high-pitched. Yet it’s Claptrap, this woobie of a pitiful and pathetic companion, that we remember more than Guardian Angel, the character who provides almost all of the intelligence and a great deal of the context in the story.

This represents a fundamental problem with so many of these companions—and let’s not count all the ones I’ve left on the cutting room floor—be it Elena or Stacey or Guardian Angel, or even the much more memorable Zelda: She spends so much time filling context for the protagonist that her own story becomes a function of it, rather than a powerful force in it. She becomes another tool, an extension of you as a hero; not a person you can trust or rely on, but some kind of symbol created in service to the protagonist. She is someone who is routinely used, ignored, and disposed of.

And is that any way to treat a friend?