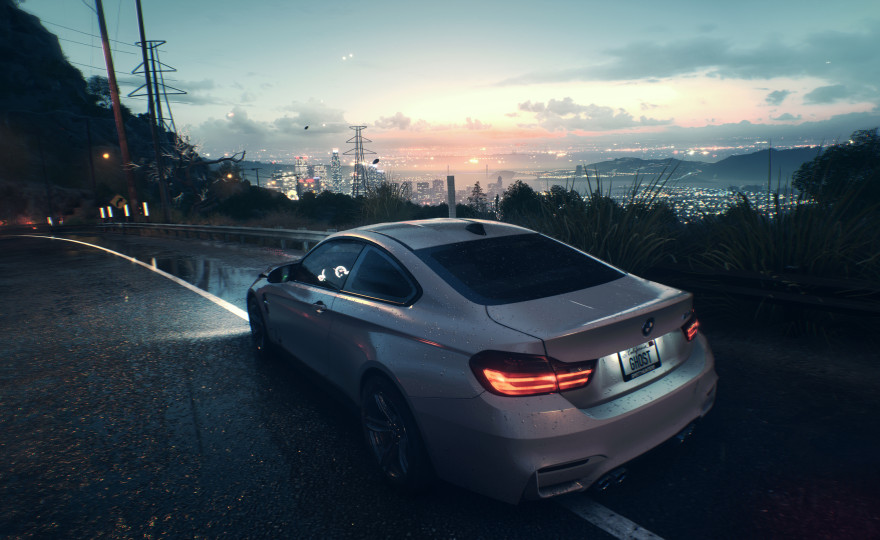 Race to the finish and back our Kickstarter to help relaunch our print magazine!

At first I thought it was a glitch. The freeway was as empty as Chernoybl—the city around me like Fukushima at closing time. The sky was dark and heavy, the light catching yellow and orange in the humidity, a Michael Mann glow. I rounded a lazy four-lane corner in my Subaru, ready to gun it down the off ramp, when everything shifted. The sky lightened like the color was bleeding out of it, and dark clouds crossfaded into existence. An orange sun burst into life on the horizon line, god-rays spilling over the hillside. I slammed the e-brake and stared blankly at the world around, now no longer a frame from Collateral, but a skyscape to be gazed at. It all happened in less than a few seconds, jarring and bizarre, but it was no mistake. In Need for Speed each part of Ventura City (Los Angeles by any other name) has its own weather and time, as if each district was a single frozen moment, suspended. This is no open world, but a closed trap—the long looping roads leading forever in circles through an endless night. The city as a racetrack, an ouroboros of asphalt.

Los Angeles has a history of being imagined as an inescapable loop. Sofia Coppola’s film Somewhere, a portrait of the aimlessness of success in that sprawling city, opens with a Ferrari running laps in the desert. After what seems like forever the driver stops and steps out, the look on his face suggesting that he is surprised, no matter how fast he drives, to have ended up where he started. The first player I encountered in Need for Speed’s always-online world seemed to be restaging that scene—endlessly donuting in the centre of an empty intersection. I stopped and watched for a while, wondering what she was doing, her yellow Lamborghini kicking up layers of tire smoke into the static street light, not another car to be seen for miles.

I was interrupted from this hypnotic image by the jingle of my in-game phone, a constant presence in the game. It was Spike, who touches the brim of his carefully positioned cap as often as the other characters mention his trust fund. He is one of the lifeless cast of actors you are forced to stare down in the game’s cutscenes—first-person pieces of film that try desperately to force a relationship between you and your crew by having them regularily fistbump your body double. Though specced to depict a community of illegal street racers, these light- and surface-obsessed artifacts are as edgeless as New Girl. Vapid posers grin at each other in pristine sets, flirting with the camera and each other equally. Bars serve drinks in red frat-party plastic cups that your body double lifts up to the edge of the camera frame to fake drink, clearly revealing they are empty. The real-world racecar driver Ken Block stands there gripping a Monster energy drink, in a Monster jacket, with a Monster hat, like a panopticon of branding, visible from every angle. There’s something unnerving in their atmosphere, a manufactured distance that is at once odd and painfully familiar. The endless night of Need for Speed belongs to these millennial cliches, Twitter-handles-as-characters whose boredom leads inevitably to their law-breaking street racing. A nothing-to-lose attitude, not born of desperation, but of a complete lack of risk. When, at the end of everything, a dead-eyed Magnus Walker tells you “welcome to the rest of your life,” it can’t help but feel like a prison sentence.

It was during one of these scenes that I again found myself subject to another of the game’s surreal moments. During an exchange in the hub garage, my conversation with a plucky mechanic ended with the camera accelerating sideways, away from the scene, as if my character’s head had become severed from its body. Like the moment in Barton Fink, the Coen brothers’ kafkaesque LA mystery, when the camera draws itself away from the main character, following its own path into the bathroom and down the drain, there was a strong disjuncture to this move, as if some unspoken rule had been broken. The camera eventually came to rest on the undulating curves of my Subaru in the corner of the garage, and as I moved my camera around it, I couldn’t help but feel that the head of my character was still somehow present, disembodied and floating, a phantom.

It’s hard to keep track of the sheer amount of these undermining moments in Need for Speed. From the “vistas” that turn out to be a series of depressing postcards of parking lots—often tucked behind neon-lit industrial architecture—to the hard-to-shake feeling that you are always circling this traffic-less, pedestrian-free ghost city, but never passing through it. Each one contributes to an undertone of meaningless cycles, and enforced imprisonment. What appear at first to be missteps start to coalesce into something of a portrait, a vision of our time, intentional or not, that rejects complexity and struggle in the service of the ceaseless pursuit of self-fulfillment. It is as if, despite its desire to present a fantasy of street racing, filled with glimmering metal flaked cars and neon glows, Need for Speed can’t avoid the darker implications of such of world view.

The soundtrack is a perfect example, a wide-ranging selection that seems like an attempt to divorce songs from their meaning. Run The Jewels stand out like an air raid siren, with “Blockbuster Night Part 1” throwing up, among the put-downs, “Face it / The fellows at the top are likely rapists / But you’re like, ‘Mellow out, man, just relax, it’s really not that complicated’ / Well pardon me, I guess I’m just insane as you explained / Or maybe sanctifying the sadistic is deranged.” In Need for Speed’s vapid loop of edgy warehouses and fist-bumps, RTJ play their typical trick: making everyone look fake. Elsewhere HEALTH, expert chroniclers of LA’s commercial decay and hedonistic youth, serve up “New Coke.” Its ironic hook—“Life is good!”—is somehow subject to a brainless attempt to be read as a life-affirming cry. Need for Speed’s exercise in stripping these tracks down to brainless bangers has the opposite effect of its intention, only serving to further the portrait of a world free of both value and worth.

For a game based entirely around street racing, this depthless world is the worst of realities. What is risk in a world where the cops are drivers so incompetent you often watch them slide past on their roofs, or slow to let them catch up in timed pursuit challenges? What is skill in a world of rubber-banding racers who run gymkhana events and sprint races as if they were both demolition derbies, throwing themselves into corners and each other with no intention of following a racing line? What is style in a world of hashtags and corporate branding, where the empty streets are the only audience to your customizations? It’s only when you strip all this away that there’s anything of worth to be found beneath Need for Speed’s shiny surfaces.

First I had to sell my Subaru BRZ. Its wind-tunnel curves looked altogether too slippery. Nothing that looked like that could fight, or struggle. Instead I looked to the past, to the legends. I got my hands on a 1986 Toyota Sprinter, an iconic “eightsix” in Japan. A lump of 1980s design, a block of styrofoam with the corners cut off, it was ideal for my project. In Matte cream and black and emblazoned with Kanji, I fashioned it as a tribute to Initial-D, the street racing manga that tells the story of Takumi Fujiwara’s journey from delivery boy to champion street racer. Before long I had the bodywork bulging, and the horsepower pushing 400. All that remained was to dial the handling for drifting, to let that lightweight tail swing wide on the corners. Taking it up to the mountain roads, screen spotting with rain, for a moment we flew.

For that moment I was able to ignore the constant clicking of the REP counter, awarding xp for every insignificant action. To ignore the bleating of the phone and the top corner pop-ups. I was able to hit the apexs all the way down the mountain, look out across the city glinting in dawn light. My eightsix hovered between control and chaos, ready to spin out on every oversteer. The atmosphere was there, the game was there, the history was there, in that moment. Yet in Need for Speed the handling, the fun, the art, all of this, they are so stacked under layer after layer of meaninglessness, multi-faceted surfaces that gesture at everything and deliver nothing. It was a good run, but as I came off the slope and headed into a tunnel bathed in tungsten glow the moment was lost. I came out the other side and it was night once more, the Michael Mann glow reinstated above the towers of the unreachable city, the dawn never leading to the day. I pulled onto the freeway, and unconsciously scanned the horizon, half expecting to see a billboard emblazoned with Less Than Zero’s famous words “disappear here.” Like Bret Easton Ellis’ novel, Need for Speed presents a world where value is a spent force and meaning a positive slogan. It might seem like an unlikely game to access a history of social critique in the context of LA, but yet there it is, beneath the clearcoat and the trim, in the glassy puddles and flat shopfronts. The game might try to ignore this implication, but if we let it, if we label it as “empty fun” or allow it to be stripped of meaning, then Need for Speed only becomes more of a portrait of our times.