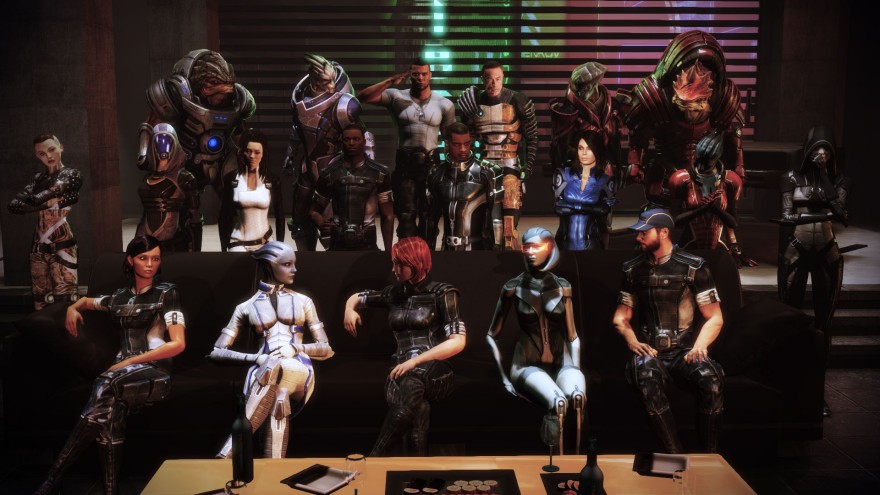 There were a bunch of great games released in 2013, and we’ll be counting them down later this week. But there were also a bunch of games that got great in 2013, either through community support, bug patching, or DLC. Here are the year’s most notable achievements in revision.

You didn’t know that Bloodlines got an update this year? Bloodlines gets patched every year, thanks to the efforts of a small modding community and internet hero Werner Spahl, or Wesp5. I’ve gone back to Troika’s outrageously detailed RPG more than once in my life, and every time I reinstall it, there’s a new Wesp patch out. On an almost geological time frame, he is polishing the game into the diamond its publisher-rushed launch stopped it from becoming (this will, incidentally, remain a black mark on the house of Activision until the very end of time).

Perhaps you quit playing Bloodlines during the arduous sewer level, or after realizing your folly in not leveling Celerity as a melee character. But what if I told you that Wesp had “fixed warehouse thug with long range eyesight,” “added or removed doorknobs” (10/24/13), “repaired bad Ocean House basement sprite,” “replaced boat-ending asian vampire” (7/22/13), and “raised Well Educated penalties” (4/4/13)? I will seize any excuse to play Bloodlines another time, and those sound good enough to me. There’s something beautiful about seeing a game grow closer to its full potential, doorknob by doorknob.

9. Tales of Maj’EyalThis widely acclaimed roguelike is another dungeon diver that has cleaned itself up and started hitting the bars where Don’t Starve players hang out. TOME has actually looked good for years, but it keeps improving under the hood. An intuitive ability bar, consolidated commands (no longer is “quaff” its own command, boasts the FAQ), and a streamlined interface help mask the fact that the game will eventually torment you with thorny decisions about your archmage builds. Despite continuing improvements, the presentation isn’t quite Path of Exile: I still laugh at the high-strung hop your little sprite does when he moves or attacks. But if there’s any game doing more work to overcome the cursed awkwardness of the old roguelike template, I don’t know it.

Playing ETS 2 feels like almost nothing. Booting it up is the easiest thing in the world, like it’s a game you’ve been playing forever. What’s the point of listening to a new album if you’re not in the cab of your gargantuan truck, your invisible hands on the wheel, cruising down the highways of Europe in an Audiosurf haze? The sensible pace of the game’s NPC traffic simulation, coupled with stinging fines for collisions, actually restores the transgressive thrill of bad driving that GTA lost long ago. (The devs have been giving the people want they want: they took the speed limiter out in July, and seem to be loading up on crash noises.) The game is listed as a sim, but its real genre is something musical—driving trance, or electronic night.

Teleglitch is a fiendish Doom-inspired roguelite that looks as chilly as it plays. There’s something about the upward drift of its camera, and the chittering darkness that intrudes on the edges of invaded rooms, that makes it feel like the walls are conspiring against your little spaceman scientist. The cartoonishly ill-fated MILITECH facility is a distorted, alien place: total blackness borders the narrow bands of walking space you’re given, and sliding doors extend to some infinite ceiling at the top of your screen. Guns are the most comforting thing in the game, spitting action lines and belches of fuzz that clear out the awful gray and puke-green creatures chasing you. Deadpan death screens say that “you are free” or “you have found the answer” to the question of “how it feels like not to exist.” Teleglitch is ice cold and brilliant, the best of the new wave of accessible roguelike hybrids.

The Mass Effect trilogy ended at its lowest point—a sloppy episode of teenage dourness saddled with a bizarre anime-inflected villain. The witless provocation of its final scenes was a weak echo of the beautifully threaded payoffs of Dragon Age: Origins three years before. After five straight years of winding up, the devs dropped the ball, and fans got to make their own branching decision about whether to blame EA, writer Mac Walters, or themselves.

But the DLC for ME3 has served as an apology that Bioware was unwilling to give outright. The Extended Cut mended fences, and Leviathan pushed the fiction in new directions. The best addition, Citadel, came out this year, and it’s an unexpected gift from a series that was always promising more than it could deliver. Its light tone cuts against the mood of ME3’s main plot, but that’s alright; it feels like a pocket of the game they should have made.

The game is pure arcade craftmanship.

Super Mario Kart. Mario Kart 64. Sonic & All-Stars Racing Transformed. These are the only good kart racing games ever made, and anyone who questions All-Stars’ place on the list should have their candy-colored racing wheel taken away. With a light touch, Sumo Digital rectified the excesses of Mario Kart without overcomplicating its core systems of sliding and boosting. Last-place racers are given useful but not world-beating items. Simple vehicle mods give the hardcore set a bit of space to tinker. Tracks based on Golden Axe and Burning Rangers feel like the dreams of a Genesis-addled teenage brain. The game is pure arcade craftmanship, and its recent Steam release made it better, adding a noisy crew of improbable PC mascots: the Russian General Winter (Company of Heroes 2, apparently), Football Manager, and Team Fortress among them.

Crawl is an RPG of such ancient reputation that it was once canonized by a council of serious people in Berlin. But for a full-featured, bushy-bearded roguelike, it’s surprisingly approachable. The ASCII mire of antiquity has given way to a clean tileset, which makes the whole world look less like a dirty table that alphabet soup has been spilled on. Tutorials, online spectating, and optional mouse controls ease the pain of entering yet another mammoth dungeon with its own cranky set of rules. But of course the intricacy of that rulebook is also inseparable from the roguelike’s appeal: Crawl is famous for the variety of its gods, whose strict commandments can transform the way your Merman Death Knight or Minotaur Berserker does his dungeoneering.

And like many classic roguelikes, the game is always being revised and expanded, like a huge squat monster manual that has grown to occupy an entire bookshelf. But it’s worth cracking open, especially if you never have before. It’s huge and odd and impossible to finish, and it’s not going anywhere.

20 years later, Doom is still a big fucking deal. The latest edition of Brutal Doom is some kind of bloody bellowing miracle that hauls the great old game to its feet and makes it young again. The mod changes everything about Doom except the things that matter, and gives it features that once only existed in charitable misrecollection. Modern mouselook is in (thanks to source port ZDoom), headshots are in, projectiles behave better, shadows are cast, and so on. When you boot it up, you’ll be shocked to remember how quick and free shooters once felt.

The game is now a constant hysterical eruption of gore, a living panel from that coked-out Doom comic. The world explodes with feedback, and blood runs out of the cracks. Like its circle-strafing protagonists, the shooter genre has been moving backwards in recent years, retreating into weak imitations of cinema. Doom feels less like a movie than a fever. It’s the secret room you find in the best parts of other games.

CK2 is one of those games that feels inexhaustible. Its world of petty intrigues and sudden deaths (always announced with the same ridiculous howl) continued to expand in 2013 with the excellent Old Gods and Sons of Abraham expansions, as well as continued updates to the one true Game of Thrones mod. Paradox has charmingly added a host of achievements that only unlock in Ironman mode, daring gamers to work without a save-scumming safety net. But even without the new layers of simulation, the core game remains one of the most charming role-playing titles out there.

Its focus on individual actors gives it a tragicomic air that traditional “grand strategy” titles can’t match, and it gradually acquires the sweep of a true family saga as you play through generations of failed schemers and lucky idiots. I play it badly, so it always feels like a satire about the countless misfortunes and calamities that befall nasty and ambitious people. I imagine that some players game CK2 to the max, sending all their children without Genius traits into the arms of the Church, stationing inconvenient relatives in plague-stricken provinces, and other such power moves. But the game feels like it should be about navigating messy situations and working with unlikely rulers; it’s more fun to play with the hand you’re given than to stack the deck.

The world’s greatest MMO has withstood not only the pressures of time but also the best efforts of its own players to destroy it. The stewardship of CCP Games has been criticized often and loudly, but the latest updates to their monumental creation have been strong across the board. The “tiericide” initiative and PVP rebalancing by CCP Fozzie and CCP Rise has cleared a mess of cobwebs from the shipyards. The recent Rubicon expansion marks the start of a grander experiment, which will supposedly add a new area for the first time since the introduction of wormholes in 2009.

The sophistication of these player-made war machines is always on the rise.

And there was a great year of bloc war out in nullsec—a better measure of the MMO’s health, really, than any mechanical changes. The coordination seen within the greatest EVE coalitions is unparalleled in videogames. Their conflicts are settled not just by the minute-to-minute actions of pilots, but by the gambits and miscalculations of fleet commanders leading hundreds of those pilots, and the management of directors who organize groups of those commanders, while working in concert with the directors of logistics and finance groups. The sophistication of these player-made war machines is always on the rise; the kitchen-sink fleets that were commonplace four years ago are a joke today. Campaigns hinge on morale and communication issues that are not modelled by the game but by the people who play it. EVE is the game science fiction warned us about.