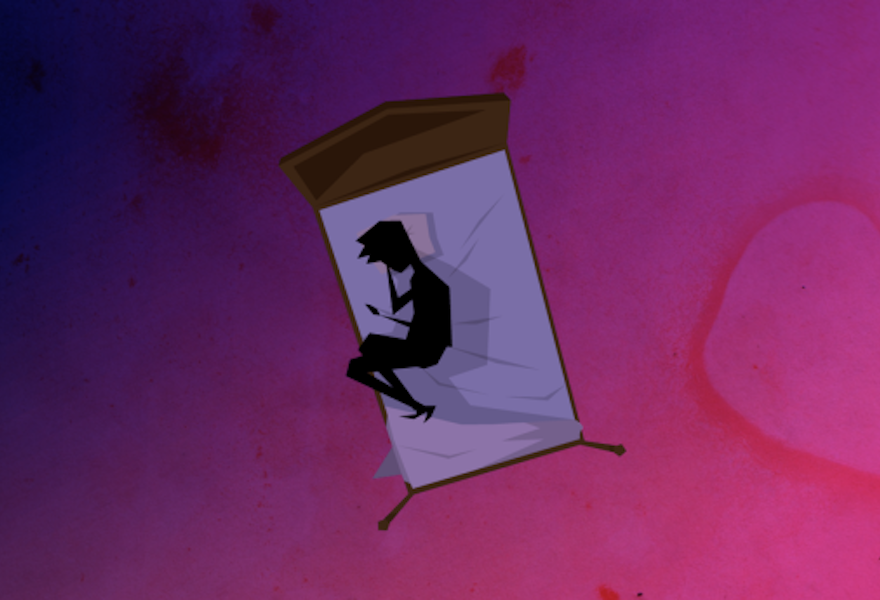 Title:
Between Me and the Night

The past can be an unclear place—definable through facts, yet easily clouded by emotion. Whether from nostalgia, personal interest, or error, humans have a pronounced ability to mis-remember or poorly represent their own history. In a sense, this defines us: as a populace, we live with the potential to build our lives on a set of experiences which may not be quite as precise, or as true, as we might want them to be.

It is typical for creators in any medium to draw on the experiences that shaped them when they were young. We tend to mythologize the art objects that set us on a path early in life, whether this is expressed as a filmmaker imitating the styles and rhythms of 70s movies, or as a game designer appropriating a crude, low-poly look similar to what she played as a child. Often, this act of remembering ends at style; we are not always asked to think about what feelings those styles bring out of us, or how. Few videogames have been crafted so totally around the phenomenon of remembering as Between Me And The Night. It uses a puzzle/adventure framework to say intimate, sometimes sophisticated things about the complex relationships we form with our past selves. It’s an attempt to speak to each of our individual experiences of growing up through a universal language. That proves to be as difficult as you’d imagine.

Between Me And The Night asks you to follow its main character from childhood to adulthood, discovering the roots of their fears and anxieties. Though its puzzles are procedural, their core is always in discovering whatever has made this character feel the way that they do, and perhaps why these feelings continue to linger on for so many years. This might read as dreary, but the first-hand experience of playing Between Me And The Night is warm and inviting—even at its most emotionally thorny, the game maintains a sense of humor and slightness. From the hand-made impression of its art design to its call-outs to cultural touchstones it assumes you will recognize, the game wants to appeal to you as a peer and draw you into its world on a personal level. (To get much more specific than this would possibly spoil the game’s unfolding sense of discovery, which is best enjoyed as it spools out.) Between Me And The Night is by held together by the clear passion and enthusiasm its creators have for telling this story, and their sense of care for this world is infectious.

For a protagonist, we are given a boy from a well-to-do suburban background. His experiences are built on large houses with bedrooms full of toys, a high school with a photo lab, a cramped apartment lined with posters for The X-Files (1993-2002) and Kill Bill (2003). I point this out because, to an extent, this game is ruled by its environmental details, and the objects that fill this character’s life do much of the work to explain who he is. When a puzzle is based around getting a Game Boy to work (as a way to unlock an 8-bit retro mini-game), or finding a complete collection of Power Rangers (1993-present) stickers, the game seems to know exactly who it is speaking to—a generation, from a specific background, that romanticizes certain toys and games as oases in what might otherwise feel like an unstable world.

The past can be an unclear place

Often reaching for a narrative logic that is aligned with imagination and dreams, the game’s creators at Raindance Lx capture the overwhelming emotions of youth with accuracy. This logic arguably reaches its most interesting expression in the interstitial levels, between chapters, in which the protagonist’s point of view fully merges with one of his videogames. These moments tip Between Me And The Night explicitly into fantasy—or, at least, the aspiration toward fantasy. Dressed up as a knight, slashing at enemies, we get a sense here of how powerful the pull can be to escape from the accuracy of memory: that to pretend being a Video Game Hero, to surround your life with an imagined Epic Experience can be a balm for what is often internalized as personal pain. The real tragedy comes from the sense that this happens at the expense of doing the hard work of being good to yourself and to others, of living a full life in the real world, intelligently showing the ease with which a fantasy life may feel preferable to accepting the pressures of personal growth.

In fact, one of the biggest successes of Between Me And The Night is in the way it describes the real world as unfriendly. If there is a villain in this game, it is the protagonist’s surroundings, which are constantly changing from one of security to one where danger seems unavoidable. Everyday situations and objects become landscapes for violence: one puzzle early on depicts the family cat as a giant monster that will claw you to death if you get too close. Once it is placated, the cat shrinks back down to size, showing its beastliness to be a projection of the main character’s own fears. The game also cycles continuously between day and night, and with nightfall comes the appearance of monsters throughout the playspace. The sense of exposure from being hunted through one’s home is strong, doing much to develop the game’s sense that the confusions of youth are themselves a dangerous place to exist. Augmented by detailed, impressive sound design (the feeling of doom at hearing a monster’s footsteps in the hallway outside while hiding in a “safe” room is powerful), these particulars underscore how real emotion can be conveyed with the mix of imagery, sound, and interactivity that is specific to games. Among the most typical for a videogame, such passages also feel the most fully lived-in.

Playing as a child, you are mostly helpless against these threats; as a teenager, you find ways of appeasing them; and then, as an adult, your only method of survival seems to be through escape. This is an elegant metaphor for the ways in which personal traumas hold on over time, slowly forcing us to adapt to their rhythms. What is experienced in childhood as terror becomes, with age, merely pathetic. The word “age” here is specific, because even though our main character gets older, he never seems to fully mature. Rather, his experiences gather on top of him in layers, insulating him from reality as he slouches reluctantly into adulthood. He winds up surrounding himself with the same toys you collect in the first passage, the nostalgia sanded into something recognizable, yet less meaningful.

In charting the growth of a boy into a man-child, Between Me And The Night seems deliberately ambiguous as to how desirable this change is. I’m split as to whether the game’s depiction of escapism feels critical or supportive of this approach to adult living, or if it is somehow both. To wit, at times Between Me And The Night seems laser-focused on getting you to ache for the sadness of its world. But, in other moments, this same escapism is used to justify, or at least explain away, less desirable adult behavior. The character ultimately becomes the definitive softboy—six unlistened voicemails and all—and the game can’t decide whether to fear or pity him for this.

the game can’t decide whether to fear or pity him

What is decisive is that, at its weakest moments, the game can feel as if it is presenting its choice of specific life experiences and family background as too universal. An air of “this is what we all go through, right?” hangs over much of it, and I wonder to what extent this might estrange certain players for whom this character is too loosely defined. Atmospheric traumas might read as much like the privilege of a certain upbringing as the Matisse print hanging up in the protagonist’s childhood home. That said, Between Me And The Night never feels less than sincere and heartfelt while doing this. And if you can embrace its perspective, the game stands to offer a moving and smart depiction of navigating life through the scrim of an angst born in childhood.