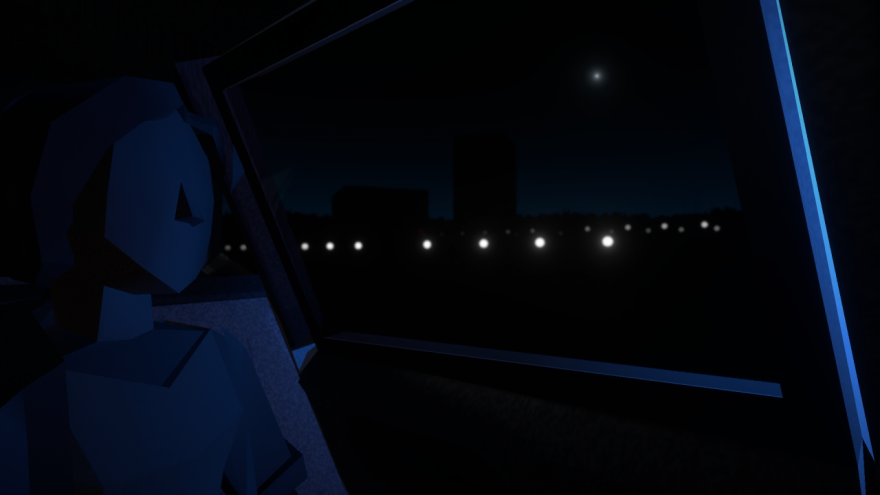 This melancholy London—I sometimes imagine that the souls of the lost are compelled to walk through its streets perpetually. One feels them passing like a whiff of air.

Cloaked in fog and rain, London is a city that invites imagination. Its inhabitants all bundled and bustling, London brings all walks of life together while keeping everyone at a distance.

“I love watching the city as it transforms each evening,” says Josh Unsworth, creator of Between Us, a narrative game about two strangers thrown together by chance one such night. “Any city at night has a magical feel, but there’s something special about London—it has this incredible energy but also a feeling of subtle otherworldliness and mystery. That’s what I hope to capture.”

In the recently released playable teaser for Between Us, a woman strikes up conversation with her cabbie. A recent tunnel collapse in the underground had left the city in a standstill, interrupting the daily routine of thousands. A soundtrack by Jess Jones sets the tone for the unusual to take place, her soft and ghostly vocals underscoring an exploratory cello line.

To many artists, from Yeats to Thomas Moore, London was seen as more of a haunting ground than a city: everyone doing the same things under a cloak of anonymity, walking past each other, unnoticed, aimless. Unsworth describes the two characters in Between Us as unsure about their place in the world, people who ” let their lives drift past them,” but come together in a moment where they can finally “break out of their normal existences for one night of truly living.” It’s a romance, but “between two people and a city rather than each other.”

Mimicking the interactions of city life itself, Between Us will revolve around walking, object interaction, and dialogue choices—with each narrative path affecting the tone and context. There’s even going to be a texting function, capturing the latest in technology that helps us ignore each other while packed like sardines in a subway car.

Unsworth cites cinema like Night on Earth and Before Sunrise as inspiration for Between Us, and admits that many of the people he’s working with are from the world of film rather than videogames. As a game trying to unravel some of the nuances of human connection, he’s found one quote from Before Sunrise particularly useful:

Unsworth currently plans to release Between Us in the summer of 2016 on Itch.io, Humble and Steam. You can keep track of any updates through the game’s Twitter and official website.