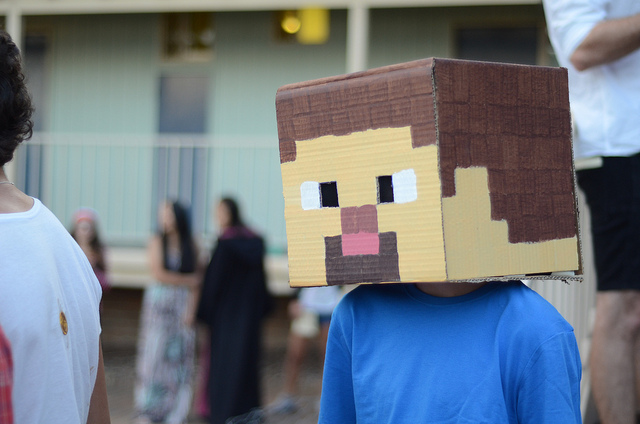 Since last year, educators have made efforts to co-opt Minecraft as the champion of videogames as learning tools. But it’s become like trying to get vice to sublimate into utility—to build utopia out of dystopia. This newest article for Slate and Future Tense by Lisa Guernsey, mother of Minecraft-obsessed daughters, is caught in between states.

One minute I’m mesmerized with its potential for encouraging children to get creative, explore, and think critically about what it takes to build new communities. The next I’m shrieking at my kids and issuing ridiculous threats. (Me, stomping over to our kitchen computer: “I have already said this three times. Shut it down. It’s dinnertime. Do I have to unplug this from the wall? Want spiders, huh? How ’bout I leave you outside tonight to find the real ones on the back porch!”)

To Guernsey’s credit, she avoids diagnosing her children with “addiction,” altogether avoiding its connotation, save a citation to an internet query.

One father wrote into the question-answering site Quora to find out how to cope with his 12-year-old son’s Minecraft addiction. (The advice: Engage with him. “Don’t just unplug your kid, teach him how to unplug himself, and encourage him when he does,” said one.)

Notice “teaching” as the parental responsiblity, too—because parents can be as much as police officer as they can a good teacher. As to Minecraft‘s reappropriation in schools, Joel Levin, the creator of MinecraftEdu, has been an usher.

According to Levin, about 300 schools have bought the discounted Minecraft so far, and 50 schools are testing MinecraftEdu. One teacher, he says, is using it to teach English as a second language through Minecraft’s online chat system. Another has her students write nightly journal entries about their Minecraft adventures.

Still, there seems to be a larger issue here, one outside of the realm of virtual reality. The first sign of an addict is someone who will intellectualize and correct to no conclusion why they use. Pardon my reach, but are we addicted to prescribing games as the panacea to the systemic depravity of U.S. education? As utopian as play can be, it often feels like we’re still distracting ourselves, putting a band-aid on a tumor.