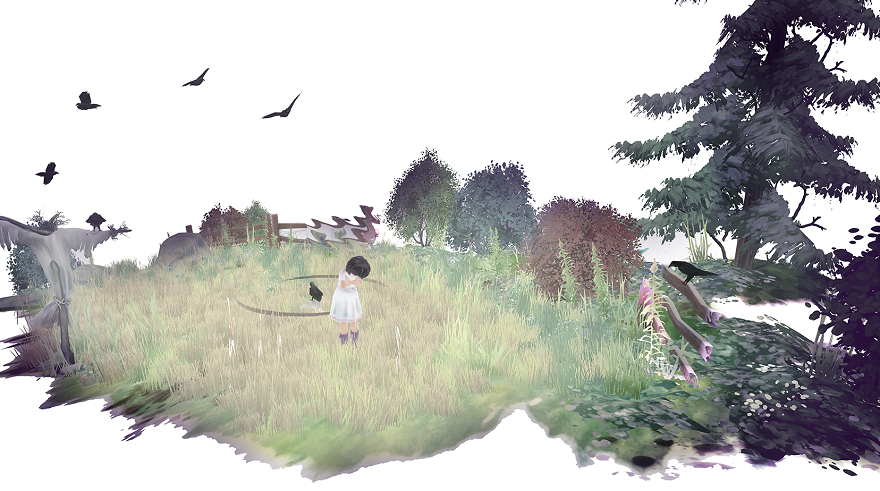 The French impressionist painter Oscar-Claude Monet, famous for exploring light and his perception of it, once remarked, “I wish I had been born blind and then suddenly gained my sight so that I could begin to paint without knowing what the objects were that I could see before me.” In effect, he wished he could look upon the landscapes he painted as if for the first time, free from any associations or prejudices.

helping players to un-see the world around them.

Beyond Eyes tries to liberate players in just this way, but for the opposite purpose. Developed by Sherida Halatoe through her one-woman studio, tiger & squid, the game uses interactive metaphors to convey some sense of what it might feel like to be blind. In Beyond Eyes, players guide Rae—a young girl who lost her eyesight after an accident with fireworks—through an unfamiliar and elusive world that only exists in relation to her remaining senses. Trees, ponds, bridges and other forms are illustrated not in relation to how they actually appear, but rather as an impression built from the sound, smell, and feel of the environment as Rae navigates it. Beyond Eyes is actually helping players to un-see the world around them.

After the game failed to meet its IndieGoGo funding goal in 2013, Halatoe eventually found a partner in Team17, best known for the Worms series, who will be publishing the game with a release date planned for sometime later this year. The alpha teaser trailer for the game originally shown by Halatoe depicted the concept of the game in slow-motion with limited detail. The new trailer, though still only a teaser, is much more richly realized, showing a colorful but fragile world that fades and changes as Rae moves through it in search of her feline companion.