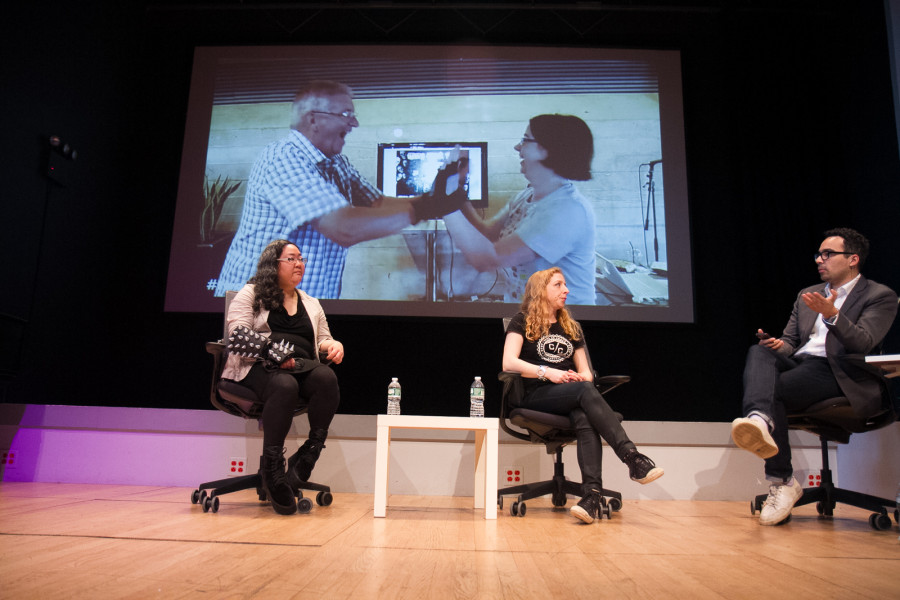 Becky Stern defined it as “anything you put on your body that augments activity,” citing eyeglasses and watches as early examples. At Adafruit, Stern works to make the tools of creating wearable tech more accessible. She gestured to the flashing device on her wrist: “This is the gemma,” she said. Gemma (and it’s larger counterpart Flora) are wearable platform boards designed to be sewn with conductive thread. Flora and Gemma are microcontrollers that unlock Arduino programming for people who don’t have a lot of programming experience. They can mimic keystrokes and can be incorporated into a variety of different garments or other projects (Stern cited an NES controller as one use). While these devices can attract negative attention—Stern cited an example of being heckled while wearing a light-up skirt on the train—both Abe and Stern agreed they can also break down social conventions in positive ways, too.

“Our clothes carry social messages… and how do you put technology into clothing without disrupting the social message clothes carry?” Abe asked. Wearable controllers are central to the games she designs as NYU’s artist in residence. “I make games with custom controllers so people can play games in a physical space, face to face,” she said. In “Hit Me,” each player wears a helmet topped with a button; the object of the game is to hit the other players button. These local multiplayer-style games create a unique playing experience that combines interpersonal interaction with the game, as well as the technology of the controller. “That kind of emergent behavior that happens between people is one of the richest experiences you can have,” Kaho said.

Wearable controllers can also facilitate players’ transformation into their characters. “You can start playing the game through the costume,” Kaho explains. “[Wearable tech] can help transform yourself from being your ordinary self into this enormously powerful character.” Wearable tech, whether it is a controller or fashion accessory, can help the user embody different roles and augment their sense of self as well as society’s perception of them.